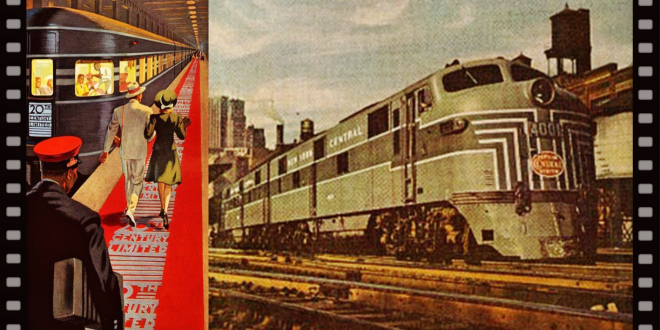 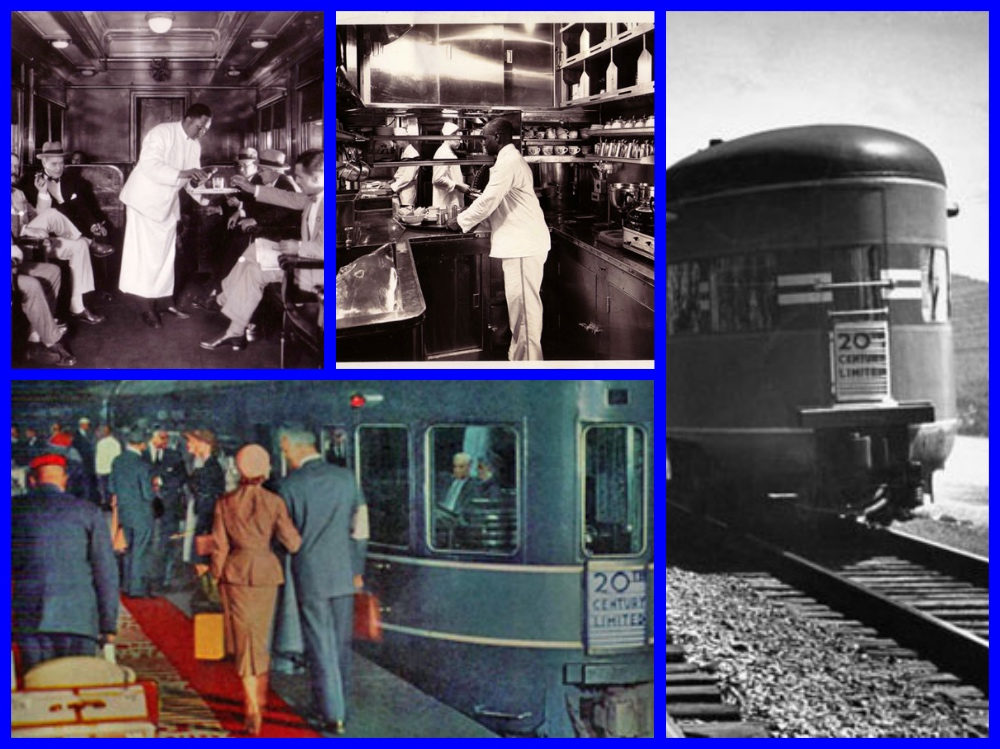 From 1938 until the last run in 1968, passengers walked down a crimson carpet to their waiting cars. This was only done for the departure from New York. Stretching from the observation car to the engine – the football field length rug was specially designed for the Century – thus, the “red carpet treatment” was born.

I never saw the red carpet, as my only ride aboard the 20th Century Limited was in late summer 1963, going from Chicago to New York. I was going to school in England and instead of flying I’d traveled by the Super Chief to Chicago and then would sail out of New York on Swedish America Line’s Kungsholm.  The 20th was the connection still offering a high quality of service and it was on time! 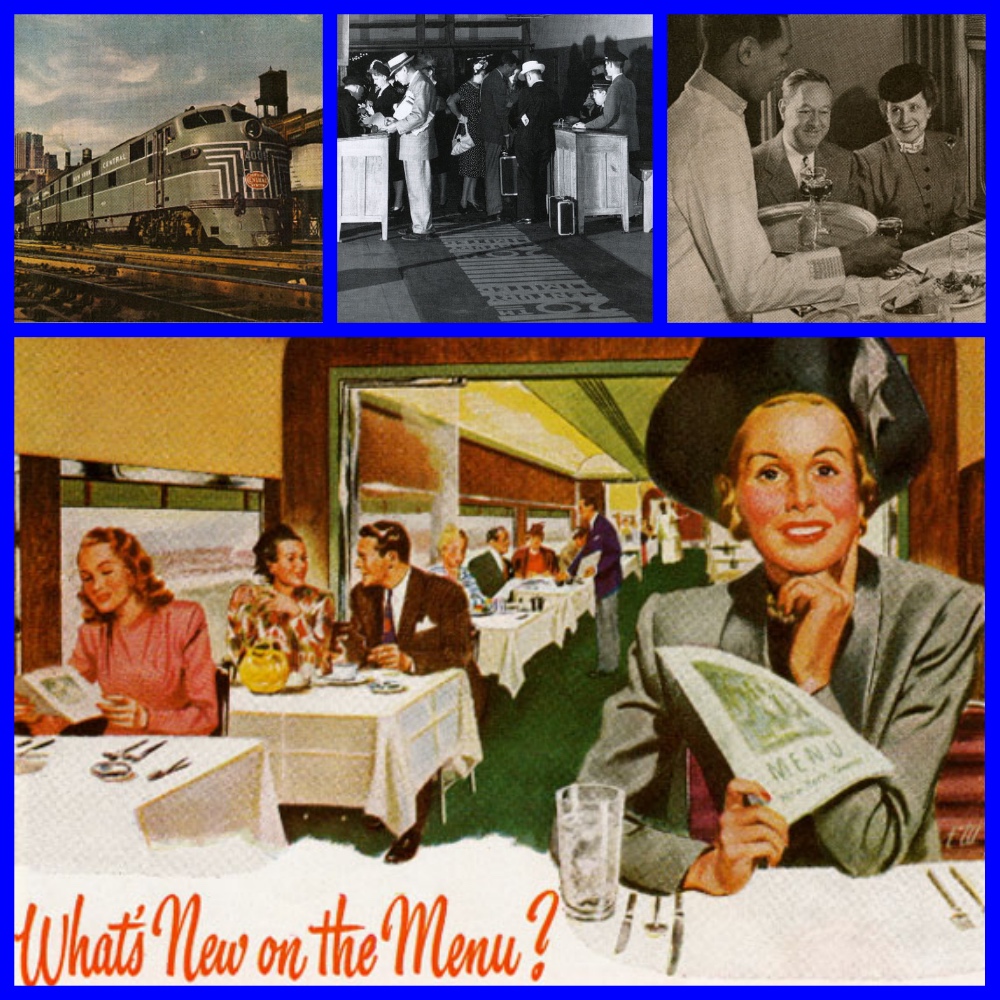 Travel time was less than sixteen hours each way between the two cities during its streamlined years. The train had through cars to Los Angeles and San Francisco.

If leaving from New York, you departed at 6 p.m. and arrived the next morning in Chicago at 8:45 a.m. 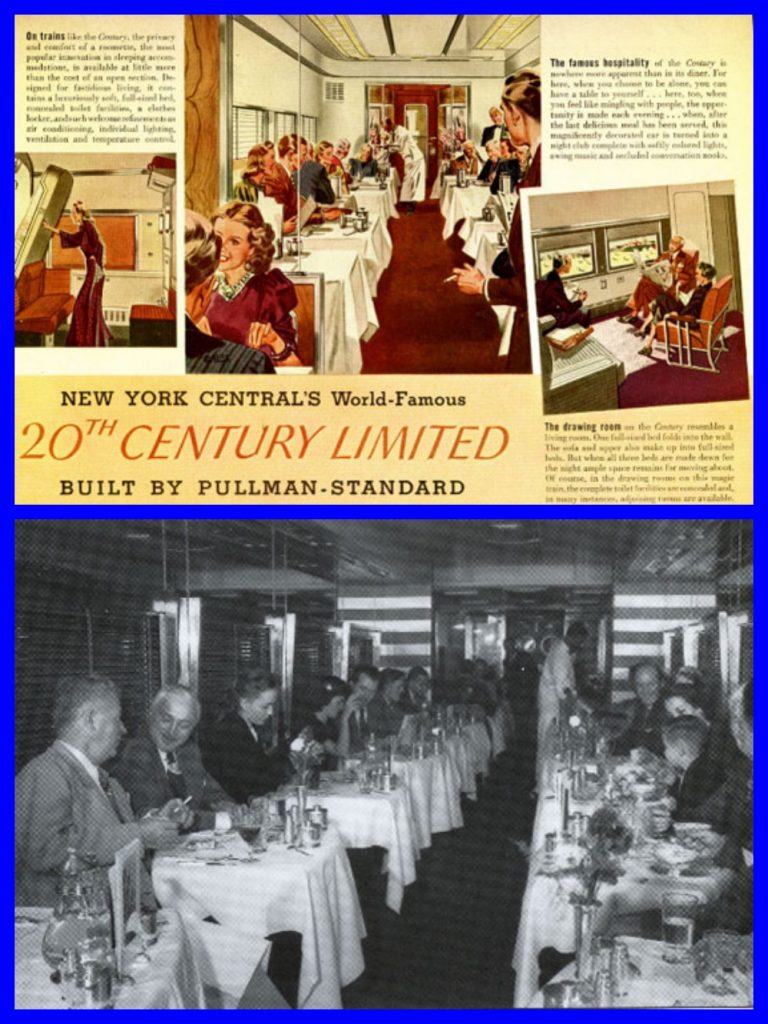 Settling in for the evening, after boarding the Century in downtown Manhattan, you enjoyed cocktails in the observation car, dinner with views of the Hudson, a good night’s sleep and then with breakfast in bed or in the dining car. The dress was business formal with no room for baseball caps. Standing in line for security, enduring a long cab ride or enduring hours on the tarmac because of bad weather were not included in your first class Pullman fare. 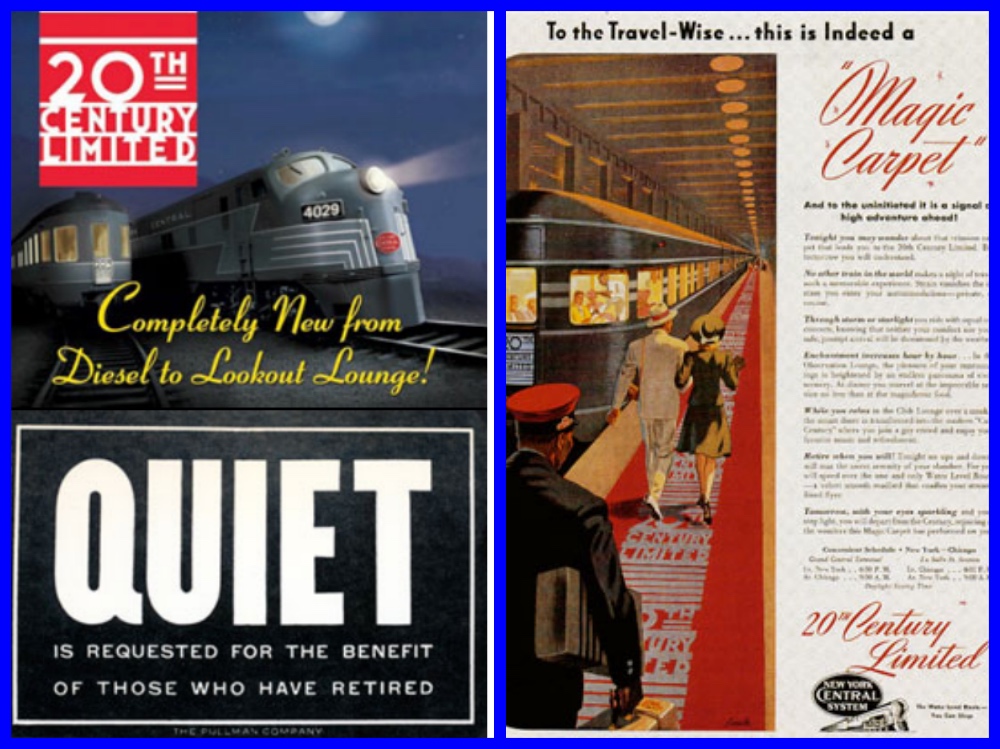 The gateway to the Century’s platform was peopled with passenger agents, Pullman conductors, and NYC conductors. Porters helped passengers to board, waiters stood at attention in the dining car with chefs busily preparing dinner. Menus included caviar, filet mignon, and lobster. 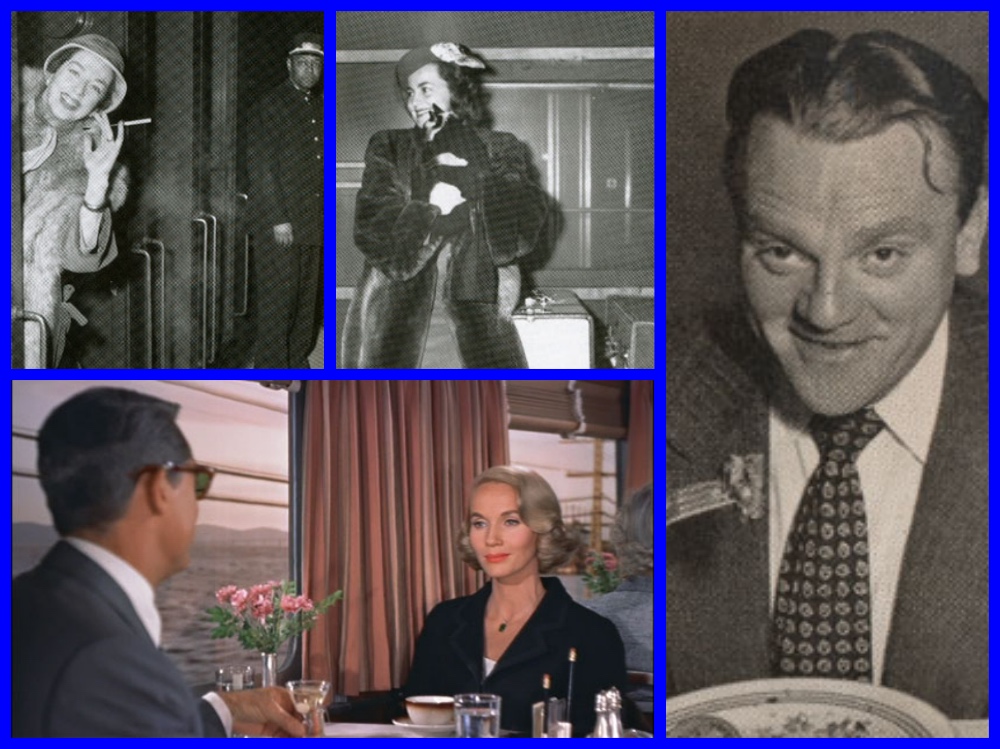 The dining room stewards had notebooks filled with their particular meal and drink requests. One of them claimed he knew 75 percent of the passengers and could call 15,000 people by their name. He knew that Marshall Field would order one martini but expected to find two in the shaker, Bing Crosby liked his wheat cakes piping hot at 6 a.m. and Robert R. McCormick wanted apple pie a la mode. 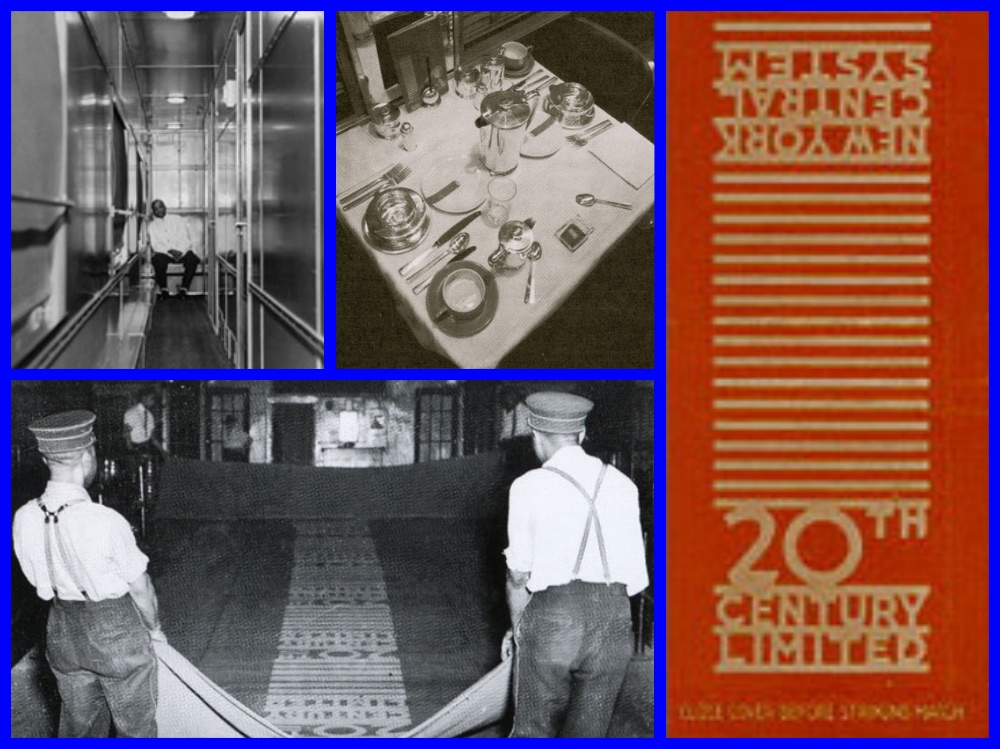 The 20th Century Limited was a repository of the comings and goings – of the rich, tycoons and stars – their habits of dress or drinking, their minds, and their manners.

EVERY NIGHT BETWEEN NEW YORK AND CHICAGO

The Century was operated like a private club and the lengthy dining car aptly named the Century Club. To businessmen, the Century was a symbol of the immutable fulfillment of a scheduled pattern; to luxury travelers, it was the last word in conservative opulence. 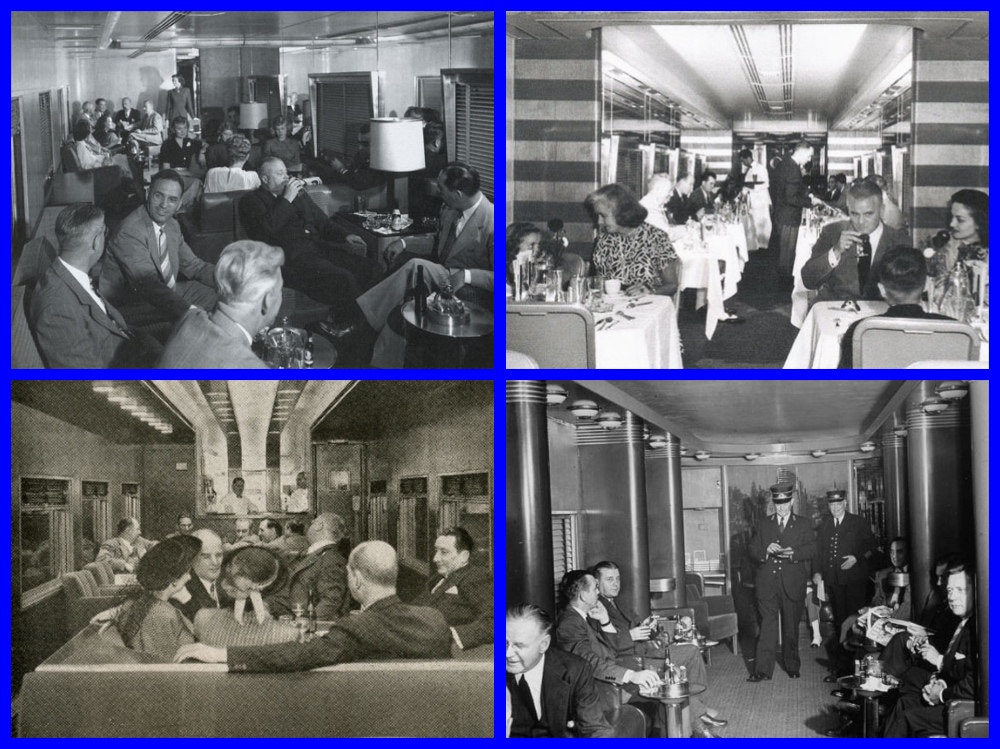 The Penn’s Broadway Limited was the Century’s chief Chicago bound competitor. Both trains wanted carriage trade traffic. They spent thousands of advertising dollars annually going after the rich, celebrities and high-end business travelers. The trains were in a race to be the tops.

In 1928, its peak year, it earned revenues of $10 million and was believed to be the most profitable train in the world. Also in 1928, Erwin “Cannon Ball” Baker, who eventually became the first commissioner of NASCAR, raced the 20th Century Limited from New York to Chicago in an automobile, beating the train. 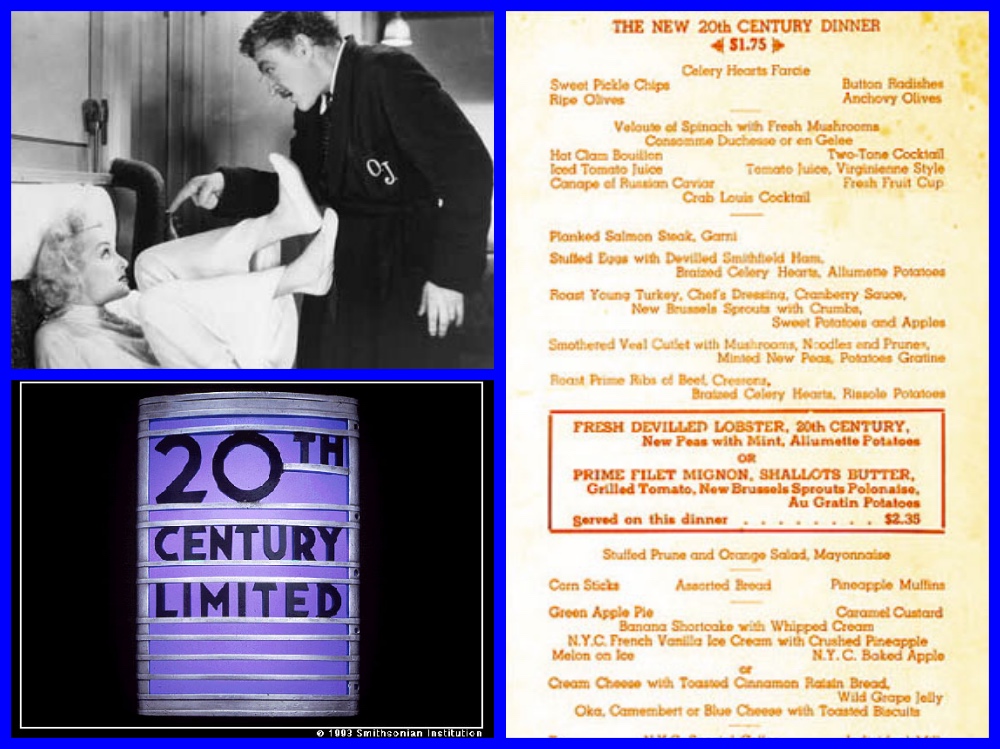 In 1938 industrial designer Henry Dreyfuss was commissioned by the New York Central to design the streamlined train sets in Art Deco style, with the locomotive and passenger cars rendered in blues and grays (the colors of the New York Central). The streamlined sets were inaugurated on June 15, 1938. His design was probably the most famous American passenger train of all time.

After World War II, Dreyfuss designed a new train set, which was pulled by Diesel locomotives. General (soon to be President) Dwight D. Eisenhower ceremonially inaugurated the new set in 1948 and actress Beatrice Lilly christening the streamliner with a champagne bottle filled with water from the Hudson, Lake Erie and Michigan symbolizing the “water level route.”

ON THE TWENTIETH CENTURY and NORTH BY NORTHWEST

The Century was also the setting for a Broadway musical entitled On the Twentieth Century, based on the 1932 Ben Hecht-Charles MacArthur stage play Twentieth Century, adapted as a film with Carole Lombard and John Barrymore in the lead roles. The train also figured prominently as a setting for major scenes in both Alfred Hitchcock’s North by Northwest and the Band Wagon starring Fred Astaire showing the through sleeping cars connecting with the Santa Fe Chief for Los Angeles. The train has been the subject of many books with Lucius Beebe’s 20th Century being one of the best. 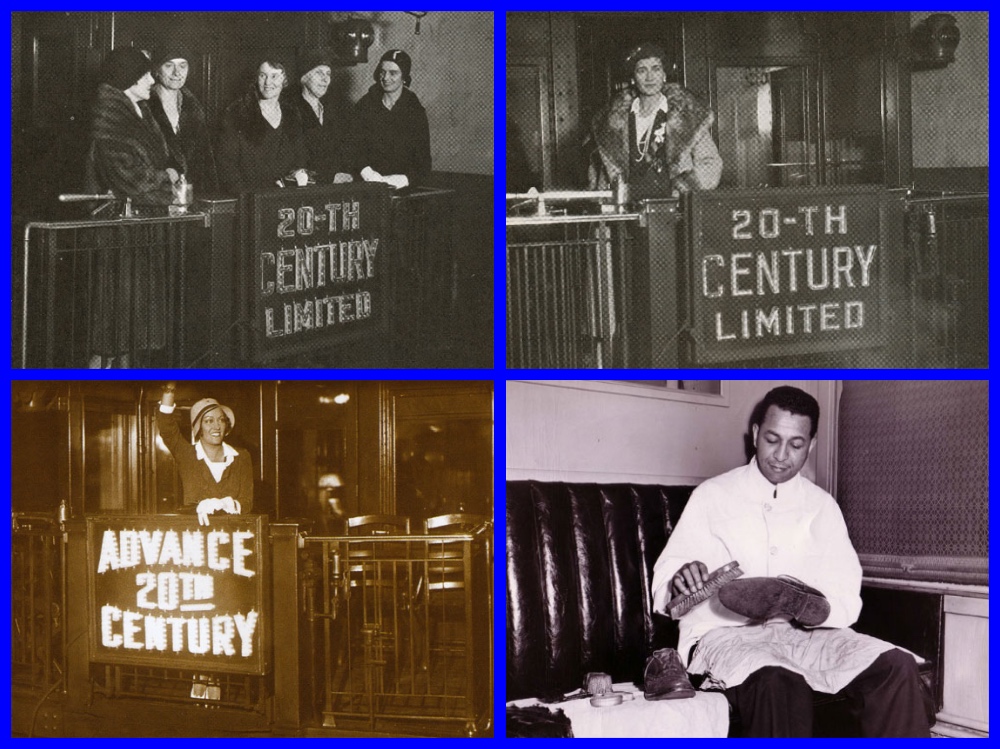 After World War II, Dreyfuss designed a new train set, which was pulled by Diesel locomotives. General (soon to be President) Dwight D. Eisenhower ceremonially inaugurated the new set in 1948 and actress Beatrice Lilly christening the streamliner with a champagne bottle filled with water from the Hudson, Lake Erie and Michigan symbolizing the “water level route.”

But by the late 1950s, the train was in decline. Business travelers were taking the new jets and the Pullman Company was losing money. The Century added coaches, slumber coaches (cheaper sleeping accommodations) and was no longer extra fare. Soon the Century lost its quality passengers to the Broadway Limited, which remained an all-Pullman train into the 1960s.

After the final run, the New York Times said that the Century ” … was known to railroad buffs for 65 years as the world’s greatest train.”