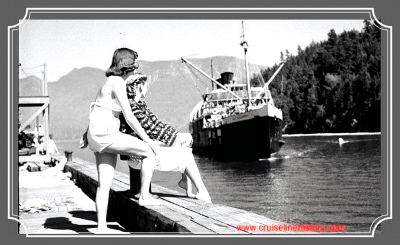 After WWII, many former warships were again purchased by steamship lines and converted to passenger liners. One such example is the old Royal Canadian Navy corvette that the Union Steamship Company turned into the steamer Chilcotin. Alas, the company’s haste in the uneconomical conversion of war-surplus vessels, along with management failed to secure greater tonnage before the war, encouraged its decline. In the end, the remaining active Union fleet was sold to Northland Navigation Company. The promotional literature published by the Union Steamship Company of Vancouver adhered to the colonializing picturesque perspective of the mountainous Northwest coast landscape well into the twentieth century.

Thus, Aiken Tweedale’s North by West in the Sunlight (1916) describes how his ship ‘passed bays beautiful as the famed Scottish Lochs, – islets as sunny as in the Grecian Seas.’ In Port Simpson, ‘the quaint, snug situation and white houses […] reminded of some village in Devon or Cornwall, but for the towering mountains in the background.’

In examining a half century of the Union company’s tourism material, my paper for the upcoming Environments of Mobility in Canadian History workshop probes into what it reveals about general themes such as tourism and colonialism, welfare capitalism, gender and recreation, and the impact of steam technology on perceptions of the landscape.