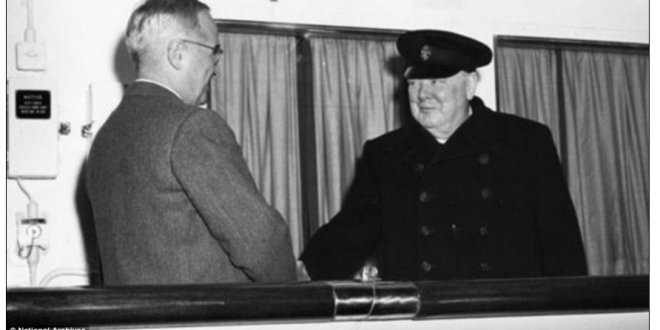 President Harry S. Truman and Winston Churchill aboard the presidential yacht in the 1940s. President Harry Truman’s presidential yacht, the vessel once known as the U.S.S. Williamsburg went up for sale in the spring of 2011 for $12 million-plus at a shipyard on the Italian coast. A video history of the presidential yacht… The Williamsburg’s descent from glory began almost as soon as Truman left the White House in 1952. His successor, Dwight D. Eisenhower used the yacht briefly before announcing that it was “too rich for my blood” and ordering the ship decommissioned in the spring of 1953. After that, the Williamsburg languished dockside in Norfolk, Virginia, and then at the Philadelphia Naval yard along with other decommissioned ships in the navy’s Mothball Fleet. In 1962 the Williamsburg rechristened the Anton Bruun, became a research vessel for the National Science Foundation (NSF). Under its new name, the vessel participated in a multi-year international Indian Ocean expedition involving 24 nations and more than 40 vessels. When that expedition ended in 1965, the Anton Bruun, set sail for the Pacific Ocean as part of the Southeastern Pacific Biological oceanographic program. After its return and a subsequent dry docking accident in which the ship sank, the yacht was turned over to the Maritime Administration. The Maritime Administration sold the vessel to a New Jersey marina owner in 1969 for conversion into a combination restaurant, cocktail lounge, gift shop, and boatel. That venture lasted two years.

The Williamsburg next surfaced in Philadelphia where in the late 1970s, the vessel was refurbished with Truman memorabilia in hopes of making her a private club. The venue never opened. The Williamsburg was then sold and resold several more times before a group called the Presidential yacht Trust purchased the ship and returned it to Washington, D.C. The Trust had planned to arrange a sale to a local restaurateur, but when that failed, it abandoned the vessel. Kim Nielsen, a former Coast Guardsman who later worked for the Smithsonian, mounted a one-man effort in the 1980s and early 1990s to save the vessel. It was an uphill effort because by then the Williamsburg was in sad shape. According to a 1990 Washington Post article, the Williamsburg was “a bedraggled, listing vessel” with “grass, weeds and even small trees” sprouting “from the sodden pulp of her once-gleaming teak decks.” Its owners were sinking as well—into debt. The Presidential yacht Trust went bankrupt in 1991 and offered the yacht to the District of Columbia to dispose of as it wished. Before that happened, the Williamsburg received another reprieve. In 1993, a group of investors calling themselves the USS Williamsburg Corporation purchased the yacht and sent it to Italy for what was billed as a $65 million restoration. (Italy was chosen because the craftsmen there know how to work on a vintage vessel like the Williamsburg.) The corporation planned to use the ship as an “exclusive charter yacht” and tourist venue. Sadly none of these plans ever materialized and the ship was scrapped earlier this year.