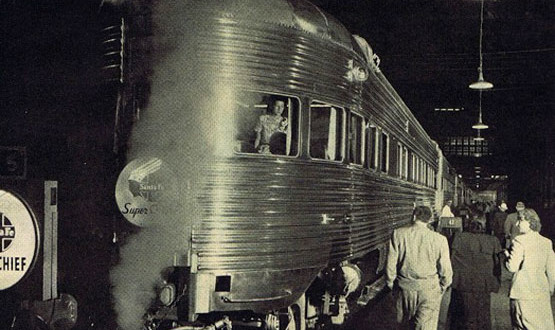 THE SUPER CHIEF – “THE TRAIN OF THE STARS”

The magic of the Super Chief – “the train of the stars” – is now just a memory. The Pullman Company managed all the private room accommodations and the Fred Harvey organization ran the dining cars. Five star meals were prepared by top chefs with Irish linen, sparklingly silver and finger bowls included. Menus featured everything from lobster, to steaks, to freshly caught trout. Nothing topped this express limited.

The passenger list for the “Super” until Amtrak took over included Frank Sinatra, Zero Mostel, Janet Leigh, Ella Fitzgerald, Elizabeth Taylor, Paul Newman, Alan Ladd, Vincent Price, Margaret Truman and on and on. Gloria Swanson, after the success of Sunset Boulevard, starred in Three For Bedroom C which takes place aboard the post-way Super Chief. Miss Swanson was a Super Chief regular.

The fabulous Super Chief made the Santa Fe Railway a household word. Until the late mid-1950s, going by train to Los Angeles from New York was the norm. For business or pleasure. It was all about meetings or confabs in New York or Hollywood or the only way to connect for your trans-Atlantic crossing to Europe on the RMS Queen Mary, the SS United States or the French Line’s Liberte. You would be booked on through a Pullman car from New York to Los Angeles. You could occupy a drawing room, compartment or roomette. This was all very Cary Grant and Eva Marie Saint in North By Northwest. You would overnight to Chicago on the 20th Century Ltd. or the Broadway Ltd. to Chicago. You could stay aboard your through car as it was shuttled from Chicago station, visit Marshall Field’s or take a quick bath at the Ambassador East. Luncheon at the famous Pump Room was a must. Then you’d board that evening for the Super Chief’s race “to the Coast” reaching speeds of 112 mph.

Stars took it, politicians, the rich, the famous, and the socially shy. Passengers didn’t wear tank tops, camouflage shorts or jeans. De rigueur was definitely in order – hats, suits, ties, couturier and Chanel. The likes of Billy Wilder and studio heads were regulars. If they wanted Châteauneuf-du-Pape, fresh water trout or 18-ounce Kansas prime steaks, they would get it. Beluga Caviar was on the menu during what Lucius Beebe called the “halcyon days” of the Super Chief. A la Super Chief – during the early 1960s. The couple is dining in the elegant private dining room. The Santa Fe train, even through the Mad Men era, still maintained an alternative to Jets during the 1960s. Stars, like Elizabeth Taylor, Judy Garland and Paul Newman, would take the “Super”! There would be only sixty to eighty fellow passengers and the Pullman Conductors and Porters would assure the stars and super rich privacy. “She came in on the Super Chief” – a popular ad for the train that appeared in many magazines. The only way for a star to arrive in Los Angeles (always Pasadena) was the “train of the stars.” Frank Sinatra stayed up until dawn in the Pleasure Dome bar, Bette Davis appreciated the discreet efforts by the Pullman Conductor to maintain some anonymity and the super rich could have the train stopped in the middle of New Mexico – so they could head to their equivalent of the King Ranch easily. Jim Lehrer, the anchor of PBS News Hour, remembers the Super Chief rumbling through the towns in Kansas where he grew up. His latest novel is set on a trip aboard the train in April 1956. Titled Super, published by Random House, it is in the tradition of Agatha Christie’s Murder on the Orient Express. The story is inhabited by the rich and famous – actor Clark Gable, former President Harry Truman, a once great Hollywood producer who’s facing bankruptcy, a deathly ill millionaire who is probably taking his last ride on Super Chief, and a mysterious man whom a porter has smuggled aboard. “Santa Fe trains came through the Kansas prairie and didn’t stop,” Lehrer said in an interview to publicize the book last May. “Specifically – the Super Chief was magic. I never rode it, but it was always in the back of my dreams.” The train was established in the late 1930s. It quickly eclipsed its rivals (including its own cousin, the Chief). It was also the Super Chief that inspired Santa Fe’s classic “Warbonnet” livery that is arguably the most beautiful paint scheme ever to be applied to a passenger train.

With Averell Harriman’s Union Pacific having launched its new streamlined City of Los Angeles in 1936, the Santa Fe needed to present its own competing leading train between Los Angeles and Chicago. Having a direct route to the two cities (unlike the UP which had to hand off the train to the Chicago & North Western Railway and later the Milwaukee Road to reach Chicago) gave the Santa Fe a distinct advantage, although its first version of the Super Chief, while well planned, was not really up to par with the City of Los Angeles in that it was not streamlined and used standard heavyweight equipment.

Engraved Super Chief stationary from Crane was featured aboard the Super Chief until Amtrak took over. In the Halcyon days of the Super Chief – Romanoff Fresh Malossol Caviar was $1.75 and a Kansas City Sirloin Steak for two was $2.75. The year was 1938. $7.90 for a Champagne Dinner. Talk about inflation. This menu is from 1970 – a year before Amtrak took over.

Knowing it needed something better the Santa Fe, with the help of the Budd Company, introduced the all-new streamlined Super Chief in May of 1937. What resulted was a passenger train unrivaled in style, design, and luxury. Part of the train’s phenomenal success was its appeal and character. In designing the new Super Chief, the Santa Fe wanted not only a contemporary passenger train but also one that reflected the railroad’s long-standing relationship with Native American’s of the Southwest. To style the new Super Chief the train had an entire staff of designers, which quickly set to work bringing the soon-to-be legend to life.

Industrial designer Sterling McDonald created the train’s classic interior Indian designs and themes. Whenever possible McDonald used authentic Native American (many of which depicted the Navajo) colors (such as turquoise and copper), patterns, and even authentic murals and paintings in the train. He used a combination of rare and exotic woods like ebony, teak, satinwood, bubinga, maccassar, and ribbon primavera for trim giving the Super Chief an added touch of one-of-a-kind elegance.

Hors d’oeuvres were served aboard the Super Chief about an hour before dinner. They were prepared in the dining car kitchen, not frozen but from scratch. Then served in the Pleasure Dome Lounge. Frank Sinatra, who was a Super Chief regular, would host all who would join him and his party – in the bar. With dinner, entertainment, continuing on until dawn. Tips were plentiful to the Dining Car Steward and Lounge Car Attendant. Everything inside the train exuded the Native American culture and way of life. However, the Super Chief’s livery also conveyed this, if not to an even greater degree. General Motors’ artist Leland Knickerbocker designed the train’s now classic “Warbonnet” paint scheme. The livery featured gleaming stainless steel with the front half of the locomotive painted in red crimson, wrapping around the cab and trailing off along the bottom of the carbody with a Native American-inspired design (a design that would go on to distinguish the Santa Fe) used on the front of the nose with “Santa Fe” flanking the center. For trim, golden yellow and black was used. As Knickerbocker put it, the design was meant to convey an Indian head with trailing feathers of a warbonnet (thus where the livery derived its now-famous name).

Until desegregation had its effect in the United States in the 1960s, the occupation of Pullman Porter along with dining car waiters, was almost the exclusive province of African-American men. The staff aboard the Super Chief, with the exception of the conductors and dining car steward, was black. To be a porter during the depression wasn’t a second rate job.

The self-imposed standard of excellence of the porters made people in the black community very proud. They planted seeds of confidence for generations to come. These were the property owners, the business owners, the men who insisted their children go to college, Many noteworthy African Americans, from Gordon Parks to E. D. Nixon worked as Pullman porters in their youth. It was Nixon who selected Rosa Parks for attention when she landed in jail. Descendants of Pullman Porters, include Willie Brown, Tom Bradley and Thurgood Marshall.

Half-way between Los Angeles and Chicago the Super Chief stops in Albuquerque, New Mexico. The train was serviced here and passengers bought souvenirs from Native Americans.

George Pullman hired newly freed slaves to work as porters, and by the company’s heyday in the 1920s, the Pullman Co. was one of the largest employers of African Americans in the nation. After ten years of difficulty, over working conditions, the Brotherhood of Sleeping Car Porters was recognized in 1935. Just as the Super Chief was born. Under the leadership of A. Philip Randolph, the porter’s union materialized into the catalyst for the civil rights movement. Randolph was equal to Martin Luther King – a major force in American equality.

For the most part the Super Chief remained quite popular through the 1950s.

The Super Chief makes it stop in Albuquerque, New Mexico. Passengers are still wearing suits. This was taken in 1970. Santa Fe maintained the Super Chief right up until the end. Although combined with the El Capitan, the “Super” was operated as a total first class service, with separate Diner, Dome Lounge and sleeping cars.

In 1951 it was reequipped with its feature car – the Pleasure Dome lounge that included dome viewing, a cocktail lounge, and the famed Turquoise Room used for dinner parties.

Air travel was still resisted by a lot of the public, until jets came in. The prop planes faced many cancellations to bad weather and there would be major air accidents.

But as the 1960s dawned, and as with the passenger rail industry itself, the Santa Fe found its fleet in decline as passengers took to their private automobiles or the skies for faster and more convenient modes of transportation. The Santa Fe still persevered and introduced all private bedroom cars during the mid-1960s.

However, unlike most other railroads, which let their services slip and trains run down, the Super Chief remained an on-time, clean and regal operation right up until the end when Amtrak took over most intercity passenger rail operations in the spring of 1971.

The Santa Fe, perhaps reluctantly, handed over its illustrious flagship to Amtrak. But the famed railway eventually refused to let Amtrak use the name Super Chief because the government run railway service was so substandard.