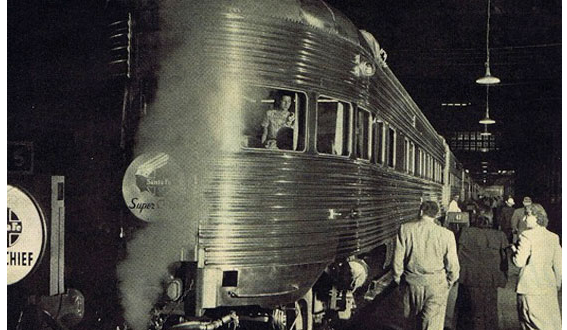 From the late 1930s to the 1950s, Hollywood adopted the Super Chief as the primary mode of travel as well as the subject of novels and motion pictures. In MGM’s The Hucksters, a brutal satire on the ad industry, Clark Gable says to another character: “Only talent agents and kept woman ride the Chief. But theSuper Chief is an exclusive club for New York – Hollywood commuters.”

But for Hollywood royalty – the Super Chief beat the Chief. The SUPER CHIEF in Pasadena, California after arriving from Chicago.

The Super Chief in “Warbonnet” colors calls at Pasadena just before heading into Los Angeles Union Station. To the right of the palm trees, above the engine, we can see the seventh floor of the Castle Green. The Moorish Colonial and Spanish Hotel was across the street from Pasadena’s Santa Fe Station. Pasadena was the “gateway” to the San Fernando Valley, Hollywood and Beverly Hills.

The streamliner became an “extra-fare, extra-exclusive, super deluxe commuter special that made Toot Shor’s handy to Romanoff’s, that connects Broadway with Sunset Boulevard.” Passenger for passenger, the Super Chief was one of the most costly trains on earth. When the train became a daily operation, Santa Fe needed five complete sets of trains. At the height of its deluxe service, from the late 1940s until the mid-1950s, equipment included a diner, the Pleasure Dome Lounge car, an observation lounge, and a third lounge, along with sleeping cars. The total load for all four sections in operation at the same time was about 500 passengers. It was one of fastest trains in the world. Onboard crews included train engineers, conductors and brakemen, Pullman conductors, Pullman porters, dining car stewards, waiters, cooks, bartenders, lounge attendants, along with cleaning crews at both ends of the line and maintenance crews en route. At times, during the trains history, there were barbers, maids and valets.