LATEST
Home > ALL POSTS > The streamline modern M.V. Chinook was “The Queen Elizabeth of the Inland Seas”! 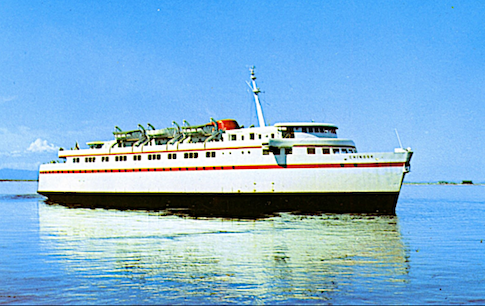 The streamline modern M.V. Chinook was “The Queen Elizabeth of the Inland Seas”!

The Puget Sound Navigation Company, or the Black Ball Line as it was widely known in the Pacific Northwest, had a long established “night route” between Seattle, Port Angeles, and Victoria. The “Big U” as she was dubbed broke all speed records on the Atlantic.   At over 40 knots, the liner would take the Hale’s Trophy, the Blue Riband from the RMS Queen Elizabeth, by crossing the Atlantic from New York to England in just over three days at sea. Gibbs’ commission for Black Ball was constructed at Todd Shipyard in Seattle.  She was christened as the M. V. Chinook and was one of the most modern vessels to grace Puget Sound waters. She was christened as the M. V. Chinook and was one of the most modern vessels to grace Puget Sound waters. Brochure cover for the M.V. Chinook.

The new vessel as dubbed by Gibbs himself  as “The Queen Elizabeth of the Inland Seas.” Menu cover for the night time service between Seattle and Victoria. With her finely raked profile, the streamlined ferry certainly looked more like a small ocean liner than a ferry boat.  Her arrow-like profile, similar to the S. S. United States, gave the sensation that she was moving even when standing still. Her arrow-like profile, similar to the S. S. United States, gave the sensation that she was moving even when standing still. The twin-screw diesel powered vessel, had a service speed of 18 knots, able to carry 100 automobiles, with stateroom accommodations for 200 and a passenger capacity of a 1,000. The Chinook proved to be an immediate success, solidly booked for weeks.  Black Ball was eager to publicize the vessel.  Promotional photos were produced, a film produced, brochures and postcards were printed.  Not since the Kalakala had a new vessel been built for the company, and they wanted to the boat to be profitable. They were not disappointed.  Her accommodations earned her reputation quickly.

The new ship had comfortable lounges, a cocktail bar, dining room and coffee shop. The staterooms had all twin beds with private facilities. Furnishing was very post-war streamlined modern. Unlike the new competing Canadian Pacific “Princess” vessels, the Chinook was a modern statement rather than a throwback to a dowdy 1930s look. Unfortunately, by the time the M.V. Chinook made her debut, storm clouds were churning on the horizon for Black Ball.  Strikes, led by American Communist Harry Bridges, fare issues and pressures from commuters and politicians forced  Peabody into a tight corner. By 1950 it was over.  The state had pushed the sale of the Puget Sound Navigation Company.  Peabody retained the Chinook, Bainbridge, Malahat, Quillayute and the fine old express ferry-steamer, City of Sacramento.  When the State of Washington took over operations in 1951, the Chinook could still be seen departing Colman Dock for trips to Port Angeles and Victoria.

Time was running out for the Seattle portion of the route.  Profits had dropped on the run, and with Peabody’s new venture in Canada, the Chinook was pulled from the Seattle part of the route.  She continued between Port Angeles and Victoria, but by 1954, Peabody had a need for her elsewhere. On May 1, 1955, the Chinook entered the Esquimalt Graving Dock for what PSN reported was an annual refit. However, the work included many structural modifications including the removal of staterooms on the Cabin Deck and most telling, the removal of the Chinook’s bow to allow bow loading. Rumors began to spread that the ferry would not be returning to the Port Angeles-Victoria run. On May 24th, 1955, the company removed all doubt when it announced the transfer of the vessel to Canadian registry and the Chinook would be moved to the Horseshoe Bay-Nanaimo run opposite the Kahloke.

The outcry was swift and loud. Both Victoria and Port Angeles predicted economic ruin without the link between the two cities. With Captain Peabody having already transferred the vessel to
Canadian registry, there was no going back.

For the next five years, the ferry sailed alongside the Kahloke, but the end of the decade was marred by Canadian labor strife. When the Canadian government approached Captain Peabody with a buyout proposal, Peabody was agreeable to the sale. Having single-handedly brought modern ferry operations to Canada, Peabody was ready to retire. Black Ball Line became a memory in 1961 when Peabody handed over the entire operation, vessels, terminals, to the newly formed British Columbia Ferries Corporation.