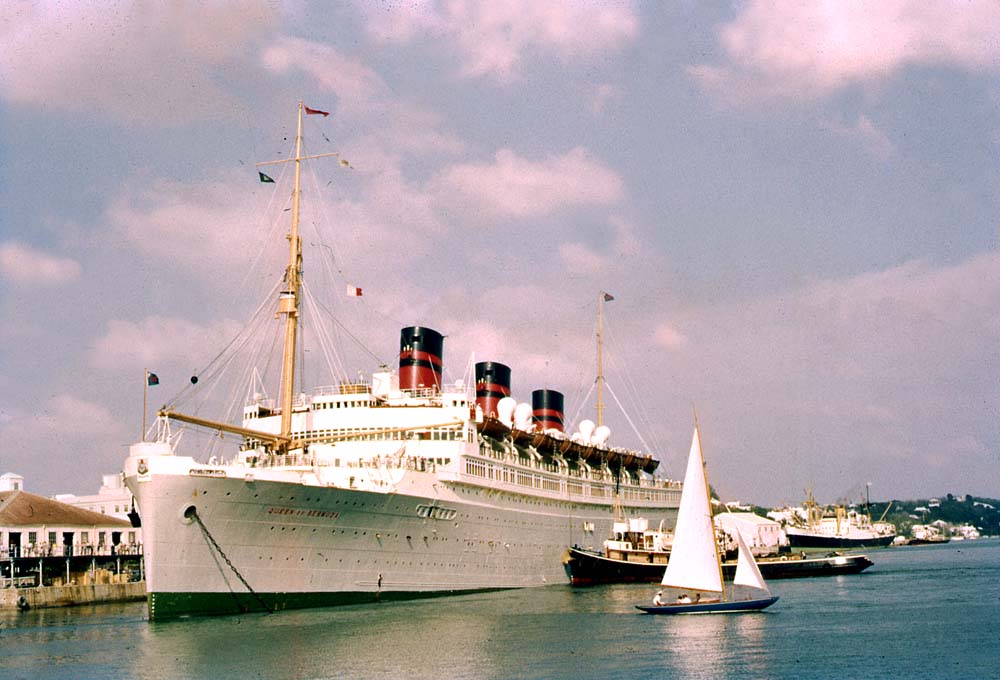 The RMS Queen of Bermuda docked in Hamilton, Bermuda – 1950s. One of the most beautiful cruise ships of all times. The Furness Line vessel was designed for cruising to Bermuda in the style of a great liner and lasted until 1966.

Wonderful nostalgic footage of a leisurely cruise to Bermuda aboard the Furness Lines’  RMS Queen of Bermuda in glorious 16mm home movie color. Music is “Bermuda” from a Furness Lines’ souvenir recording of the ship’s band under the baton of Al Donahue. Enjoy! 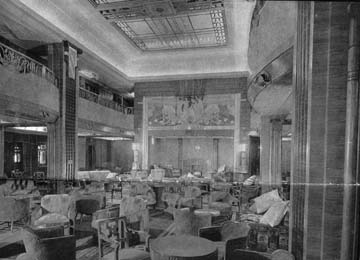 In 1919 Furness Bermuda Line was awarded the mail contract for the New York to Bermuda service.

This service reached its zenith in the years just before the Second World War when Furness Bermuda Line ordered two magnificent luxury liners – the Monarch of Bermuda and the Queen of Bermuda.

RMS Queen of Bermuda sailing from New York in the 1930s. 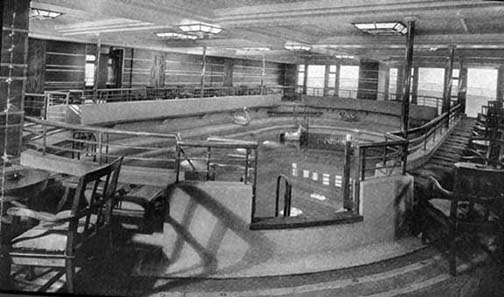 They were both built by Vickers Armstrong Ltd, Walker on Tyne, England, UK.

Shopping aboard the RMS Queen of Bermuda from a promotional film made in the 1950s.

With these two ships the Bermuda run from New York enjoyed the ultimate in luxury and they became known as “the millionaires ships”.

The two sister ships sailed on 3 week cruises from New York to Bermuda for Furness-Bermuda Line.

They were beautifully proportioned vessels with 3 funnels, and they were amongst the elite ships of their day and had private facilities in their cabins. 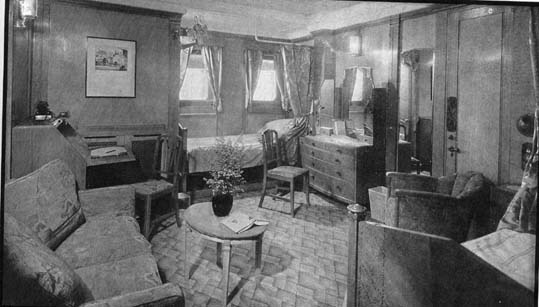 The run between New York and Bermuda took only 40 hours in each direction and that allowed 4 days to be spent on the Island.  The ships were very popular with honeymooners.

This was the luxurious heyday of travel between New York and Bermuda.

Bellboys and young officers aboard the Queen of Bermuda. 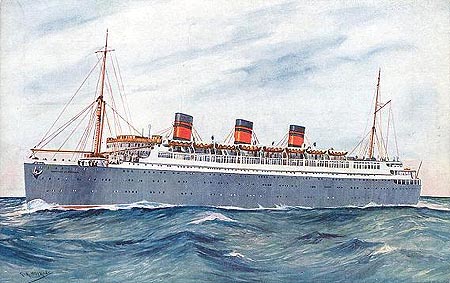 In 1939 the Second World War broke out and the two luxury liners were requisitioned for war duties. The Monarch of Bermuda served as a troopship while the Queen of Bermuda became an Armed Merchant Cruiser and later a troopship. 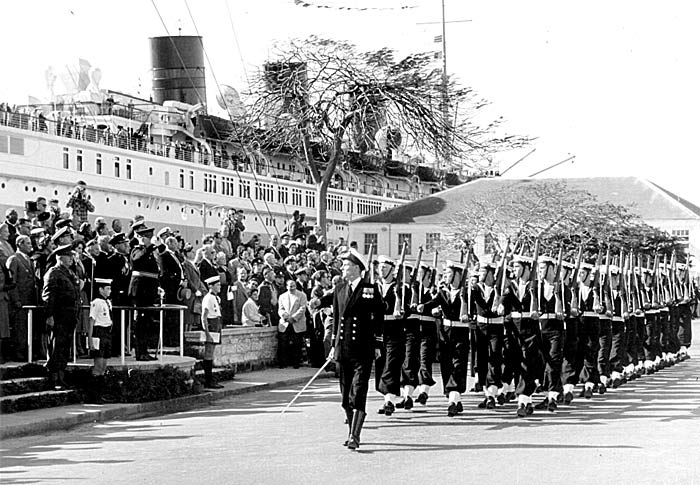 Sadly after the war while being refitted for passenger service the Monarch of Bermuda was gutted by fire and she was salvaged by the Ministry of Transport and converted into an emigrant liner. Renamed New Australia she was operated by Shaw Savill. In 1958 she was sold to Greek Line and renamed Arkadia. Eventually she was retired from service in 1966 and sent to be scrapped at Valencia in Spain. 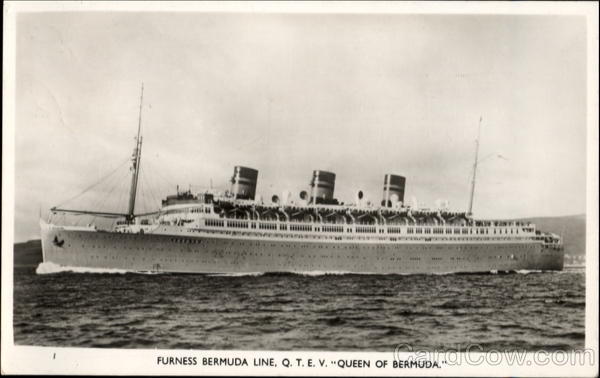 Fortunately the Queen of Bermuda did return to the Bermuda service after the war in 1947. Later in 1961 she was completely modernised and rebuilt with just one funnel. But by this time the heyday of Furness Bermuda Line was over and by 1966 the company decided to withdrawn from the New York to Bermuda run. 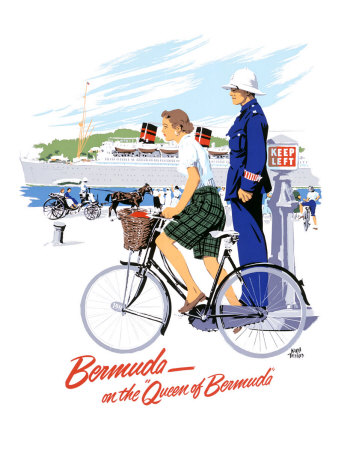 As a result the Queen of Bermuda was retired from service and scrapped at Faslane on the River Clyde. It was the end of a glorious era of luxury travel between New York and Bermuda. 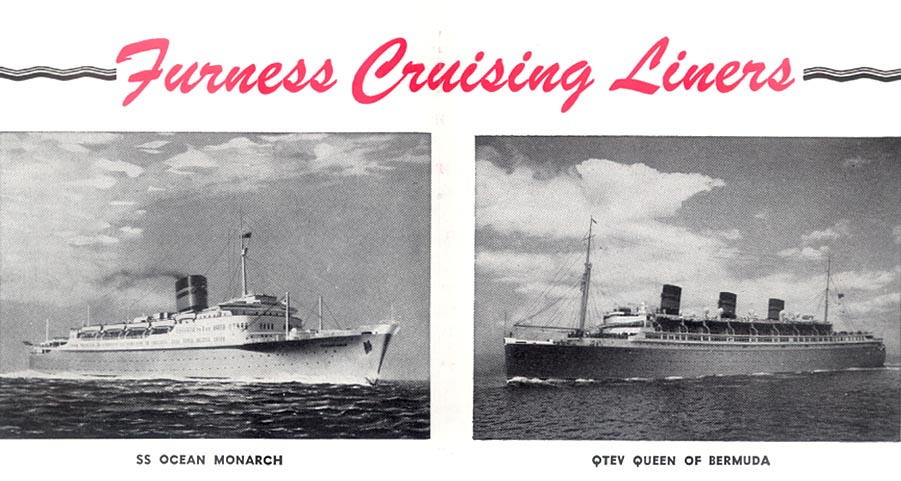