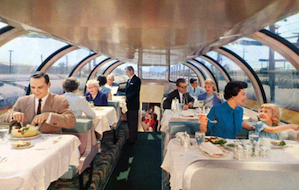 Dining aboard the CITY OF LOS ANGELES - 1960s. www.cruisingthepast.com

Streamliner & Pullman History: The City of Los Angeles was a streamlined passenger train between Chicago, Illinois, and Los Angeles, California via Omaha, Nebraska, and Ogden, Utah. Between Omaha and Los Angeles it ran on the Union Pacific Railroad; east of Omaha it ran on the Chicago and North Western Railway until October 1955 and on the Milwaukee Road thereafter. The train had number 103 westbound and number 104 eastbound. 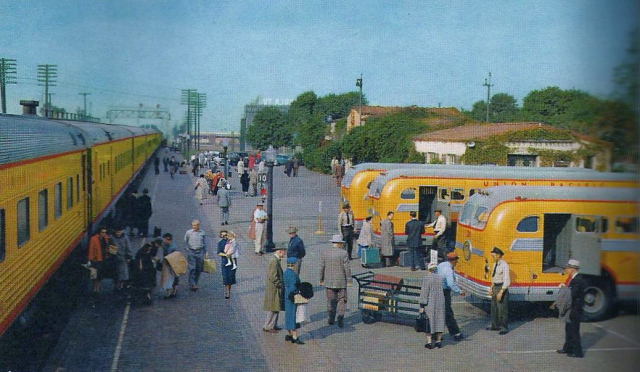 This train was the top-of-the-line for UP, which marketed it as a competitor to the Super Chief, a streamlined passenger train on the Atchison, Topeka and Santa Fe Railway, and the Golden State, a streamlined passenger train jointly operated by the Rock Island and Southern Pacific railroads. As with the City of Los Angeles, many of the train’s cars bore the names of locales in and around its namesake city.

CNW / UP used one of two three-unit sets of EMC E2 locomotives as motive power beginning in 1937. The UP scored a public relations coup in the mid-1950s when the City of Los Angeles was featured in two episodes of the popular television series I Love Lucy. In 1955 the Milwaukee Road assumed the service, replacing the Chicago and North Western between Chicago and Omaha. Actor Ronald Reagan often traveled on this train and even did a full page print ad for it that appeared in the National Geographic magazine. In a cost-cutting move, the City of Los Angeles was combined with the City of San Francisco in 1960.

Video of Union Pacific Streamliners in the 1930s. Scene 1: CITY OF DENVER arriving in Chicago after making the 1,048 mile trip from Denver in 16 hours. Scene 2: E-2 diesels in 1938 pull the CITY OF LOS ANGELES passenger train in Los Angeles.

Passenger service can be traced back to within a few decades of railroading’s first appearance on the American scene in the late 1700s. Passenger travel via train began in the 1830s in eastern markets, reaching midwestern lines in the 1860s. Union Pacific inaugurated its passenger service in July 1866. 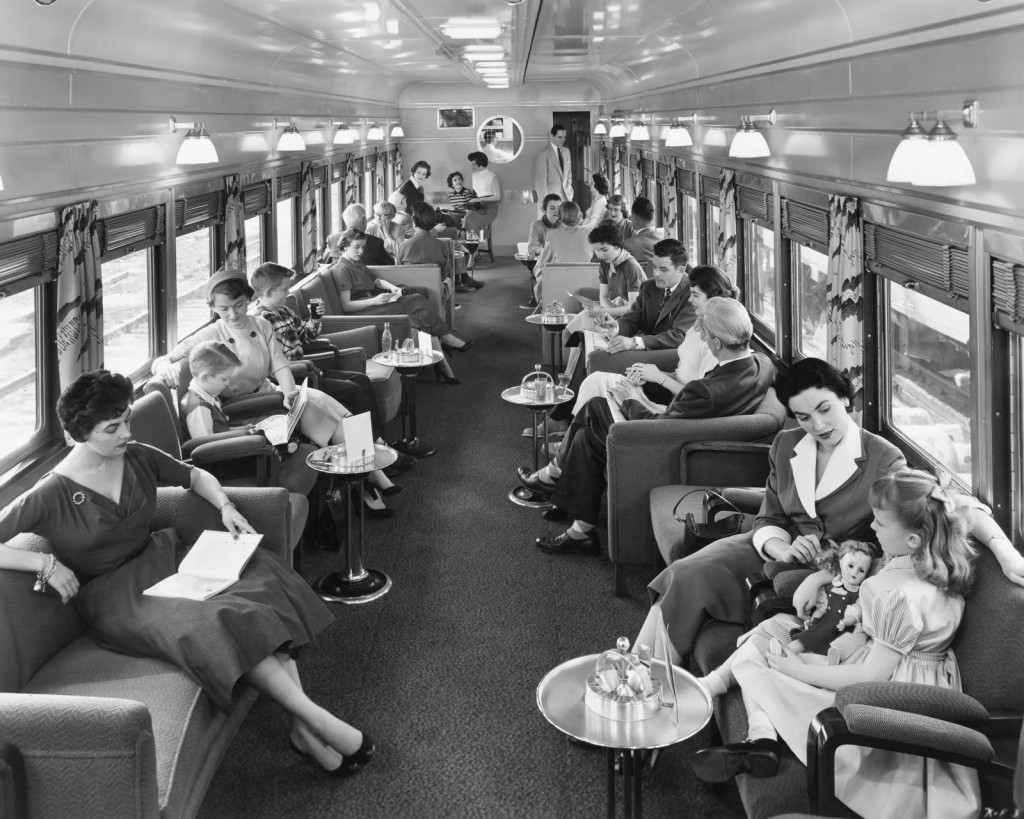 Lounge Car aboard a Union Pacific Streamliner in the 1950s. 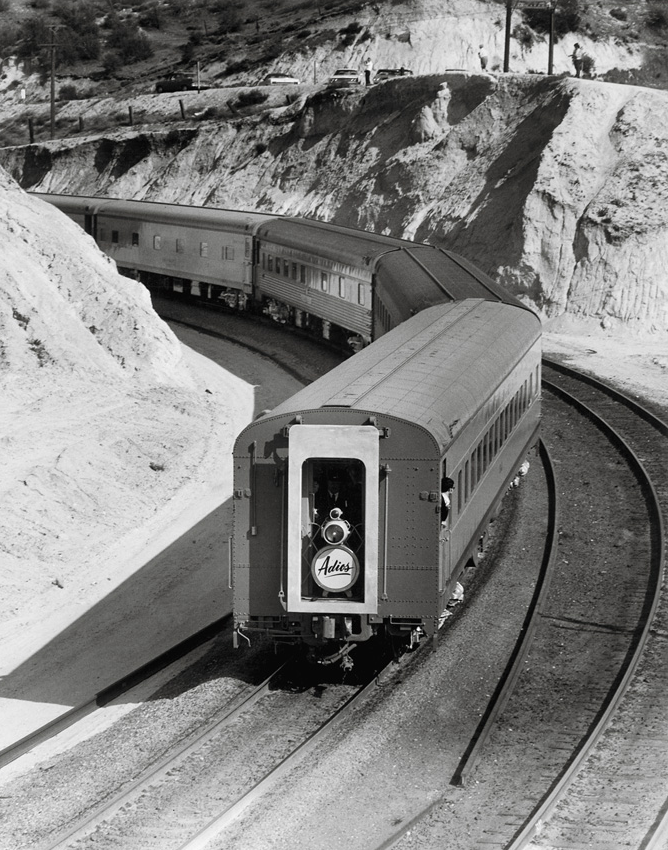 THE CITY OF LOS ANGELES – on final run when Amtrak took over in 1971… Adios to deluxe rail travel.. 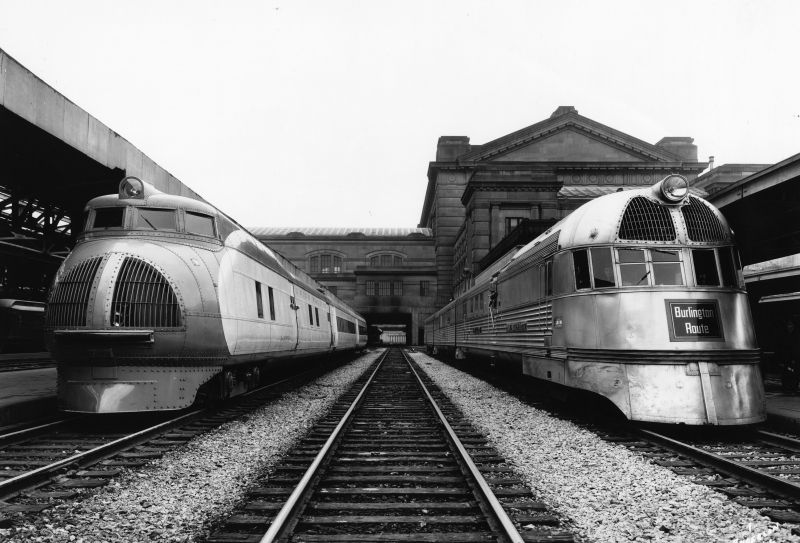 The first passenger trains were undeniably crude; they seldom travelled more than 20 miles per hour and meals were eaten quickly in station dining halls. Wooden benches were the standard seating accommodations and wood stoves furnished heat, while air conditioning was unheard of until the 1930s. 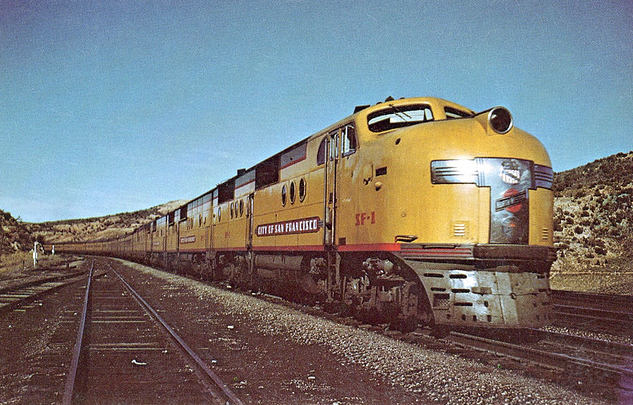 The City of San Francisco

In the beginning, there were even occasional wrecks, until the intricacies of traffic control were figured out. However, improvements and innovations soon began. George Pullman’s famous “hotel” sleeping cars were in service before the golden spike was driven, and dining cars followed soon after. Regular train service from Omaha to San Francisco was launched just five days after the driving of the golden spike on May 10, 1869, and before the turn of the century, innovations in design had produced a number of significant advantages in passenger travel.

One of the finest Union Pacific passenger trains was the Overland Limited. This luxury train, inaugurated in 1890, made the run between Omaha and San Francisco in just 71 hours. In 1921, passenger revenues reached an all time high. However, as the Twenties progressed and the automobile gradually came to be viewed as a necessity rather than a luxury, Union Pacific decided to take some drastic steps to bring ridership back to the rails. 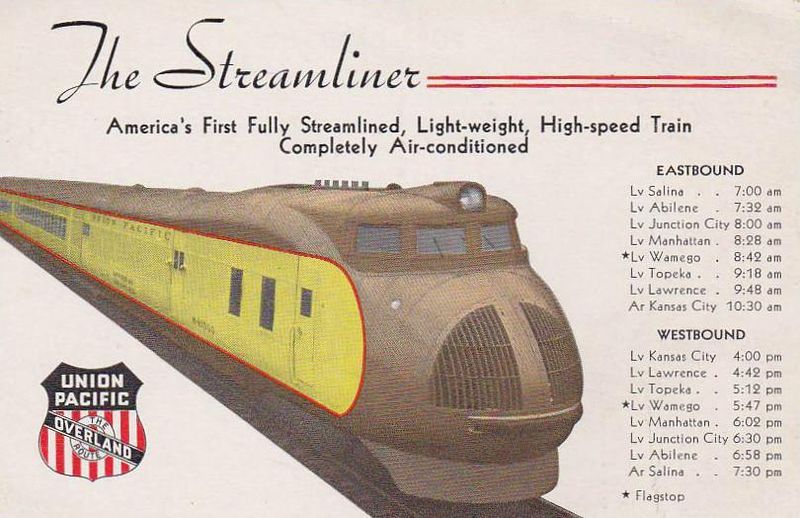 The City of Salina

In the 1930s the introduction of the lightweight Streamliner passenger trains set a new standard for luxurious train travel. The equipment you enjoy today is a remnant of those lightweight passenger trains that began operation in 1934 with Union Pacific’s City of Salina. The Streamliners’ opulent furnishings, impeccable service and total comfort combined to lure customers back to the rail. Air conditioning, reduced noise, and a better ride distinguished these trains from the conventional steam-powered models. Over the next seven years, nine more streamliner sets were added to the passenger fleet.

Additional equipment and enhanced service notwithstanding, 105 years of carrying passengers came to an end for Union Pacific on May 1, 1971. The end of passenger service for UP was not final, however. In 1992, commuter rail services put UP back in the business of hauling passengers once again.