LATEST
Home > ALL POSTS > THE GRAND MANNER OF MATSON… 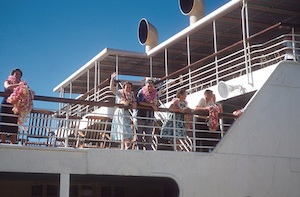 THE GRAND MANNER OF MATSON… The Grand Manner of Matson, the long-awaited White Ships sequel by Canadian author Duncan O’Brien, is a beautifully produced book covering all six of Matson’s most famous liners, from the maiden voyage of the “Malolo” in 1926 to the farewell of the “Mariposa” in 1978.

Brief history of the Matson Lines to Hawaii

Matson built a steamship named Lurline in 1908; one which carried mainly freight yet could hold 51 passengers along with 65 crew. This steamer served Matson for twenty years, including a stint with United States Shipping Board during World War I. Matson died in 1917; his company continued under a board of directors.

Sailing to Hawaii on the SS Lurline in the 1950s…

In 1932, the last of four smart liners designed by William Francis Gibbs and built for the Matson Lines’ Pacific services was launched: the SS Lurline christened on 12 July 1932 in Quincy, Massachusetts by Lurline Matson Roth (who had also christened her father’s 1908 steamship Lurline as a young woman of 18). On 12 January 1933, the SS Lurline left New York City bound for San Francisco via the Panama Canal on her maiden voyage, thence to Sydney and the South Seas, returning to San Francisco on 24 April 1933. She then served on the express San Francisco to Honolulu service with her older sister with whom she shared appearance, the Malolo.

Lurline was half-way from Honolulu to San Francisco on 7 December 1941, when the Japanese bombed Pearl Harbor. She made her destination safely, traveling at maximum speed, and soon returned to Hawaii with her Matson sisters Mariposa and Monterey in a convoy laden with troops and supplies. She spent the war providing similar services, often voyaging to Australia, and once transported Australian Prime Minister John Curtin to America to confer with President Roosevelt. Wartime events put the Lurline at risk. Royal Australian Air Force trainee pilot Arthur Harrison had been put on watch without adequate training. “A straight line of bubbles extending from away out on the starboard side of the ship to across the bow. I had never seen anything quite like it, but it reminded me of bubbles behind a motorboat. I called to the lad on watch on the next gun forward. A few seconds later the ship went into a hard 90 degree turn to port. We RAAF trainees received a severe reprimand from the captain for not reporting the torpedo. Anyway, it was a bad miss.” Her high occupancy rates during the early 1950s caused Matson to also refit her sister ship SS Monterey (renaming her SS Matsonia) and the two liners provided a first class-only service between Hawaii and the American mainland from June 1957 to September 1962, mixed with the occasional Pacific cruise. Serious competition from jet airliners caused passenger loads to fall in the early 1960s and Matsonia was laid up in late 1962.

The Mariposa and the Monterey…

Like fine hotels or private yachts, the Mariposa and Monterey carried only First class guests and promised regal pleasures on an exotic voyage to paradise. The texture of the tropics was charmingly expressed in public rooms and staterooms. The Southern Cross Lounge, Polynesian Club, Outrigger Bar and the Dining Room were all styled in the mood of Polynesia.

They were sold to Pacific Far East Line in 1971 who continued the service with minor route variations. Cruises to Hawaii and later to Alaska and further afield were added to the annual schedule in the 1970’s.

Matson Lines The smart Lurline was legendary on the Hawaii run, offering warm hospitality and pleasant diversions on five day express crossings from San Francisco and Los Angeles to Honolulu. The time spent onboard was as much a part of a Hawaiian holiday as a day at Waikiki Beach. When serious engine problems developed in 1963, sister ship Matsonia replaced her and took her more popular name, remaining in service until 1970.