LATEST
Home > ALL POSTS > THE BRIGHTON BELLE – THE ONLY ALL-ELECTRIC PULLMAN CAR TRAIN IN THE WORLD.

THE BRIGHTON BELLE – THE ONLY ALL-ELECTRIC PULLMAN CAR TRAIN IN THE WORLD. 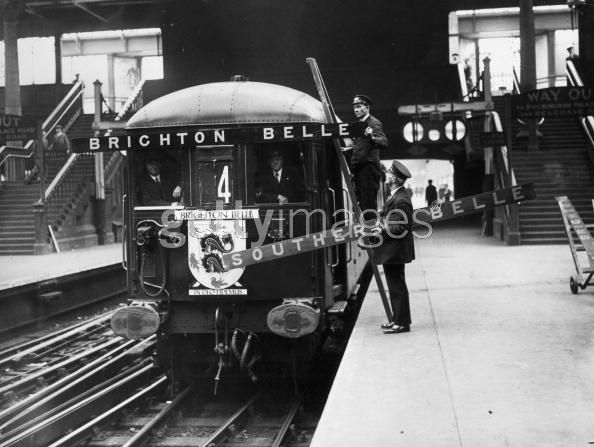 29th June 1934: Staff of the Southern Railway at Victoria station, London changing the name board on the front of a train, the ‘Southern Belle’ is now called the ‘Brighton Belle’. (Photo by E. Dean/Topical Press Agency/Getty Images)

The Brighton Belle represents an important part of British railway heritage, the only all-electric Pullman car train in the world.

Launched by the Southern Railway in 1933, it offered passengers traveling between London and Brighton a unique blend of romance, luxury and personal service.

When the Brighton Belle was withdrawn from service in 1972, it looked like not only the end of a glorious era, but also the permanent loss of a railway icon. 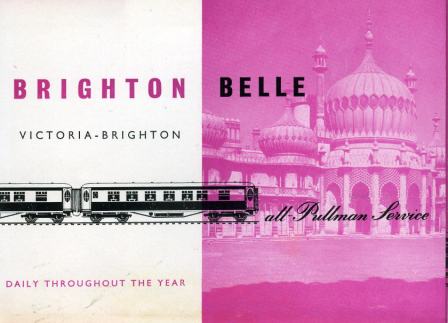 Of course this unique – on hour dining train ride – type of first class dining service today would never exist – mainly because labor costs would be too expensive.  This is true of American trains.  To create a dining car found mid-century, would be so costly that it would be impossible except on special trains – where costs are very high like the European Orient Express.

History of the Brighton Belle Pullman cars were first introduced to Britain in the 1870s by the Midland Railway. George Mortimer Pullman, an American, pioneered the idea of charging a premium fare for travel in luxury cars with at-seat meal service.

At first his cars ran singly or in pairs in normal railway company trains, but in 1899 the London Brighton and South Coast Railway experimented with an all-Pullman summer excursion train, the Brighton Sunday Pullman Limited. I

t proved such a success that it was extended to an all-the-year-round service. A new 7-car train was introduced to the route in 1908 and carried the name Southern Belle.

Other notable steam-hauled Pullman trains operated by the Southern Railway were the White Pullman from 1924 (later renamed the Golden Arrow) and the Bournemouth Belle from 1931.

To fit in with this scheme, the Southern Belle was equipped with three new five-car sets of Pullmans, built by Metropolitan-Cammell at Saltley, Birmingham. Painted in the distinctive Pullman livery of umber and cream and adorned with the Pullman Car Company coat of arms.  The Pullman train sets had driver’s and guard’s compartments at the outer ends and were commonly coupled together as a ten-car train. FIRST CLASS ABOARD THE BRIGHTON BELLE IN LATE 1960S.

The service provided three 60-minute runs in each direction and, apart from a change of name to the Brighton Belle in 1934 and wartime interruptions, continued virtually unchanged for the next thirty-odd years.

Changes began to escalate in the 1960s. As with other trains, for the benefit of track staff the end panels were treated to, first, a yellow warning patch, then an overall yellow face.

The traditional livery was replaced with standard rail blue and grey as the Pullman Car Co was no longer an independent company.

Kippers disappeared from the breakfast menu. The journey time was cut to 55 minutes, provoking complaints of rough riding.

Finally, having outlasted their contemporaries and showing their age, the three sets were withdrawn after April 1972 and replaced with standard Brighton-line trains.

The Brighton Belle was no more.

Many mourned the passing of the Belle and crowds swarmed on the platforms to say goodbye on its last day. Something of profound importance had been lost.

The Belle had personality – a whiff of luxury, an air of excitement, an aura of romance – reinforced by the people who travelled in it, an esoteric community of film stars, politicians, the aristocracy and the rich, the celebrities of the age. When the Brighton Belle was withdrawn, the fifteen cars were sold at auction and dispersed across Britain – although not, as some had feared, to America.

Fourteen are still in existence in various collections: all have been repainted into the traditional colors but many still need extensive restoration inside and out.

There is now a very real chance that future generations will be able to experience this wonderfully evocative train following the launch by the Transport Trust of the Bring Back the Brighton Belle campaign.

The objective is to restore at least 3 cars to an operational train set.

This campaign will be the beacon to fill a gap in our transport heritage by creating a working home for electric multiple-unit trains.

The cars will be refurbished one by one as funds permit.

The Belle is poised to be reborn, initially as a 3-car set capable of being propelled by, for example, a class 73 electro-diesel locomotive.

It is hoped one day to gather two more trailers and fit electric motors again so that the Belle may run once more as a self-contained train into the historic station at Brighton.