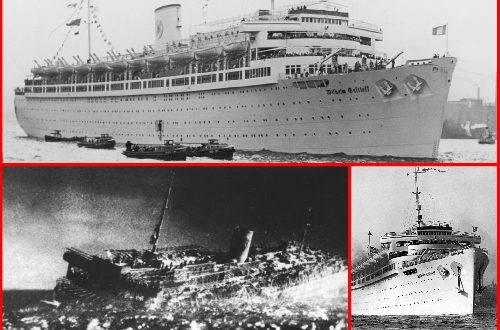 MV Wilhelm Gustloff was a German transport ship that was sunk on January 30, 1945, by Soviet submarine S-13 in the Baltic Sea. The former cruise liner was evacuating German civilian refugees from East Prussia, Lithuania, Latvia, Poland, Estonia, and military personnel from Gotenhafen (Gdynia) as the Red Army advanced. By one estimate, 9,400 people died, including over 1000 children, which makes it the largest loss of life in a single ship sinking in history. More than the RMS Titanic and RMS Lusitania combined! 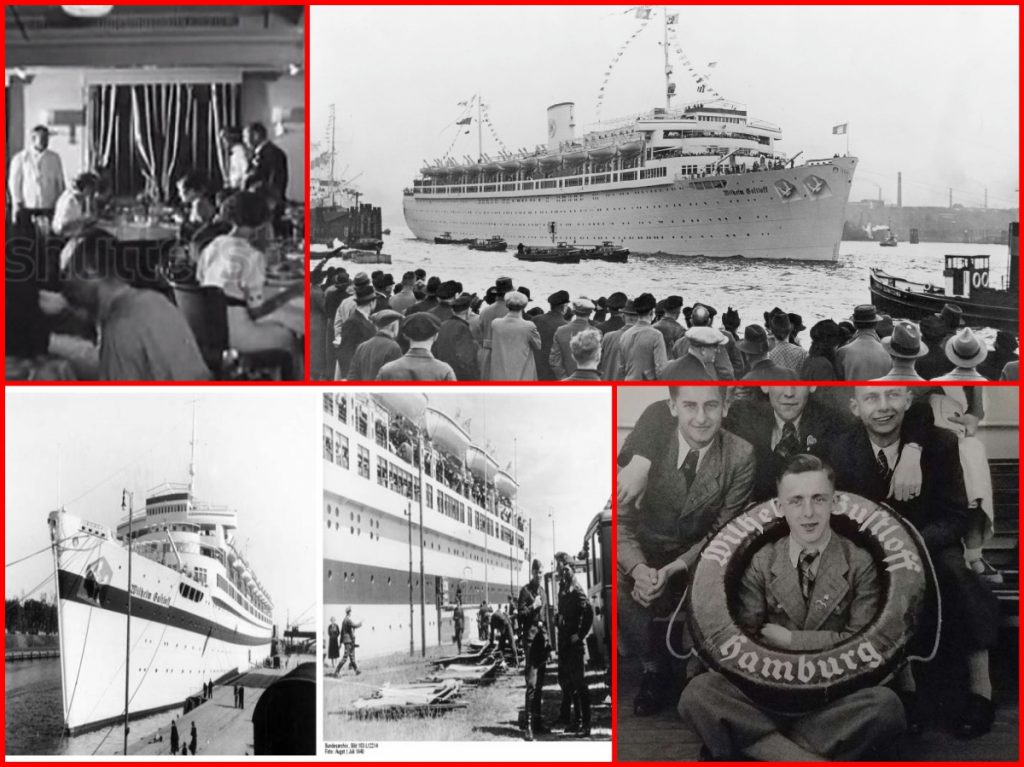 The Wilhelm Gustloff as a cruise ship.

Built as a cruise ship for the Nazi Kraft Durch Freude (Strength Through Joy) organization in 1937, she had been requisitioned by the Kriegsmarine (German navy) in 1939. She served as a hospital ship in 1939 and 1940. Then she was assigned as a floating barracks for naval personnel in Gdynia (Gotenhafen) before being armed and put into service to transport evacuees in 1945.

The ship left Danzig (Gda?sk) at 12:30 pm on January 30, 1945, accompanied by the passenger liner Hansa, also filled with civilians and military personnel, and two torpedo boats. Hansa and one torpedo boat developed mechanical problems and could not continue, leaving Wilhelm Gustloff with one torpedo boat escort, Löwe. 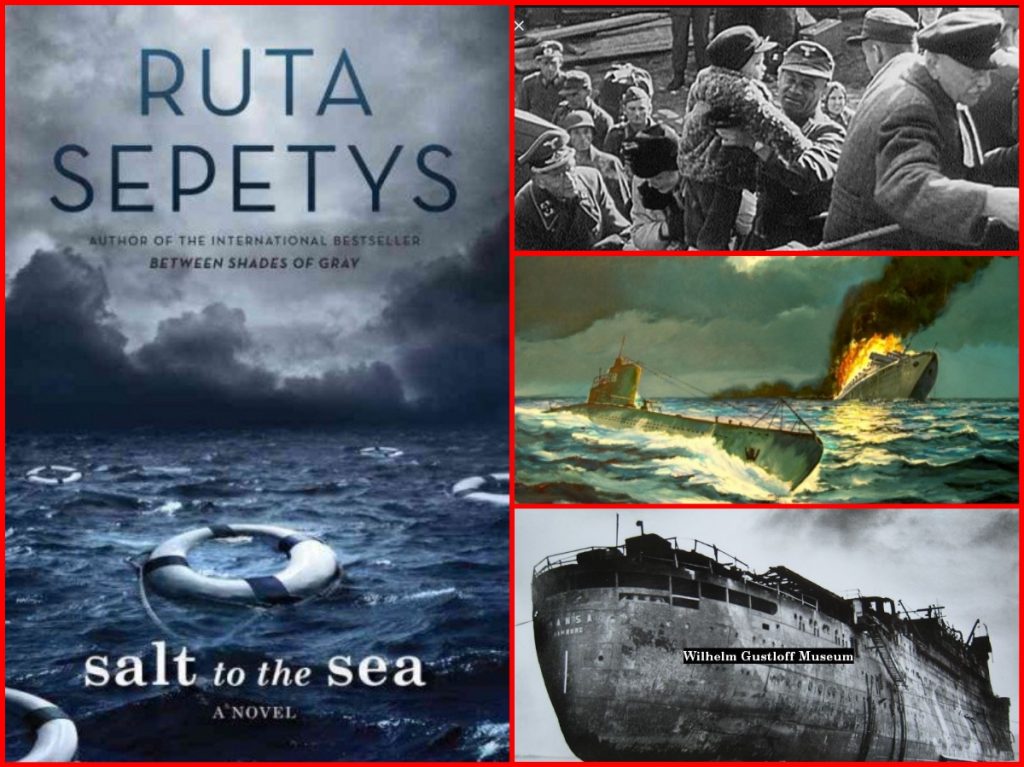 Ruta Sepetys’ novel Salt to the Sea is great reading on the disaster; Children being boarded; Submarine attack of the ship; the wreckage.

The ship had four captains (Wilhelm Gustloff‘s captain, two merchant marine captains, and the captain of the U-Boat complement housed on the vessel) on board, and they disagreed on the best course of action to guard against submarine attacks.

Fitted with anti-aircraft guns, the Germans did not mark her as a hospital ship, no notification of her operating in a hospital capacity was given. Since she was transporting token numbers of military personnel, she did not have any protection as a hospital ship under international accords. 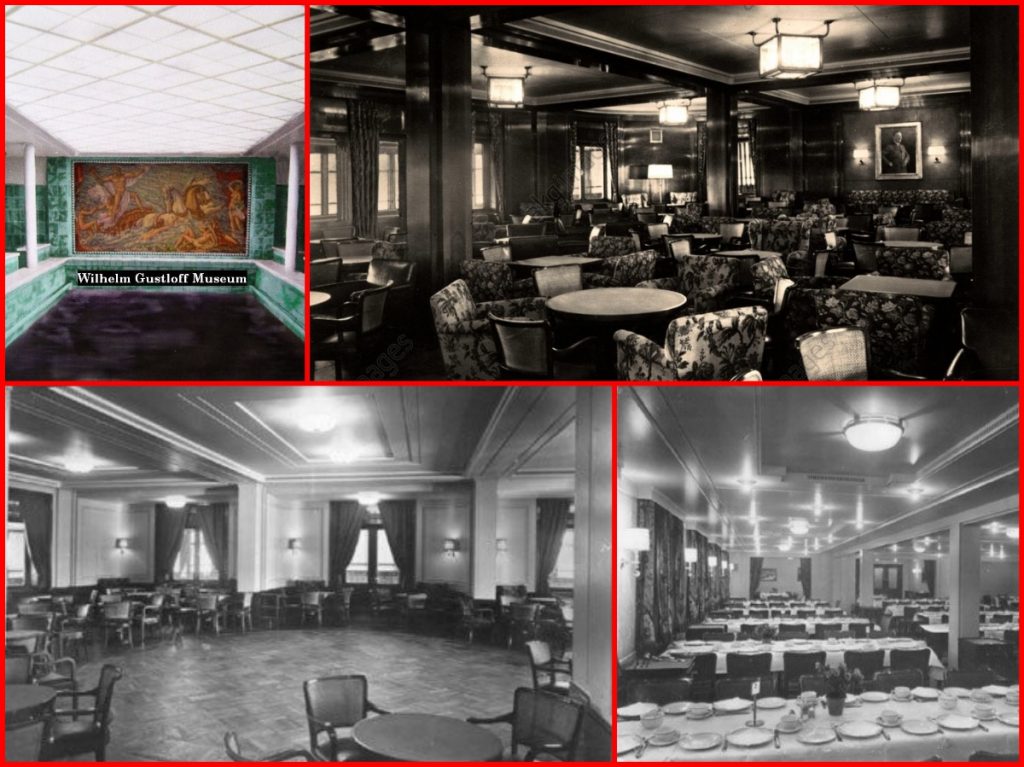 Many ask why the Gustloff story isn’t more well-known outside Germany.

German historians and academics have said that they feel it’s inappropriate to ever position themselves as victims considering the atrocities that they committed during the war. So that was one reason the German regime haven’t talked about it.
After the event happened, the Germans didn’t want people to know about it because they felt it would affect morale, and so they tried to sort of keeping it under wraps. Survivors themselves, in their memoirs, many have said, “People truly looked at me as if I was making up a story. They didn’t believe that something the magnitude of the Gustloff could ever be kept a secret like that.”