A promotional film made in 1935 by the New York Central Lines. Features a journey on the 20th Century Limited, once America’s premier train.

The New York-Chicago market was the premier intercity passenger service for Eastern railroading and the New York Central’s 20th Century Limited competed with rival Pennsylvania Railroad and its Broadway Limited for top honors (although based from traffic figures the 20th Century Limited did have an edge over the Broadway). While it will likely always be argued which train was the most successful what cannot be argued is their distinctive different styles with the20th Century Limited catering to business travelers and “new money” with its modernistic cool, sleek designs and colors while the Broadway Limited featured light, airy, and cheery accents and accommodated more to the older crowd. Ultimately, the rapidly declining interest in rail travel by the public through the 1950s forced the NYC to give up on its vaunted train and it made its final run in 1967. 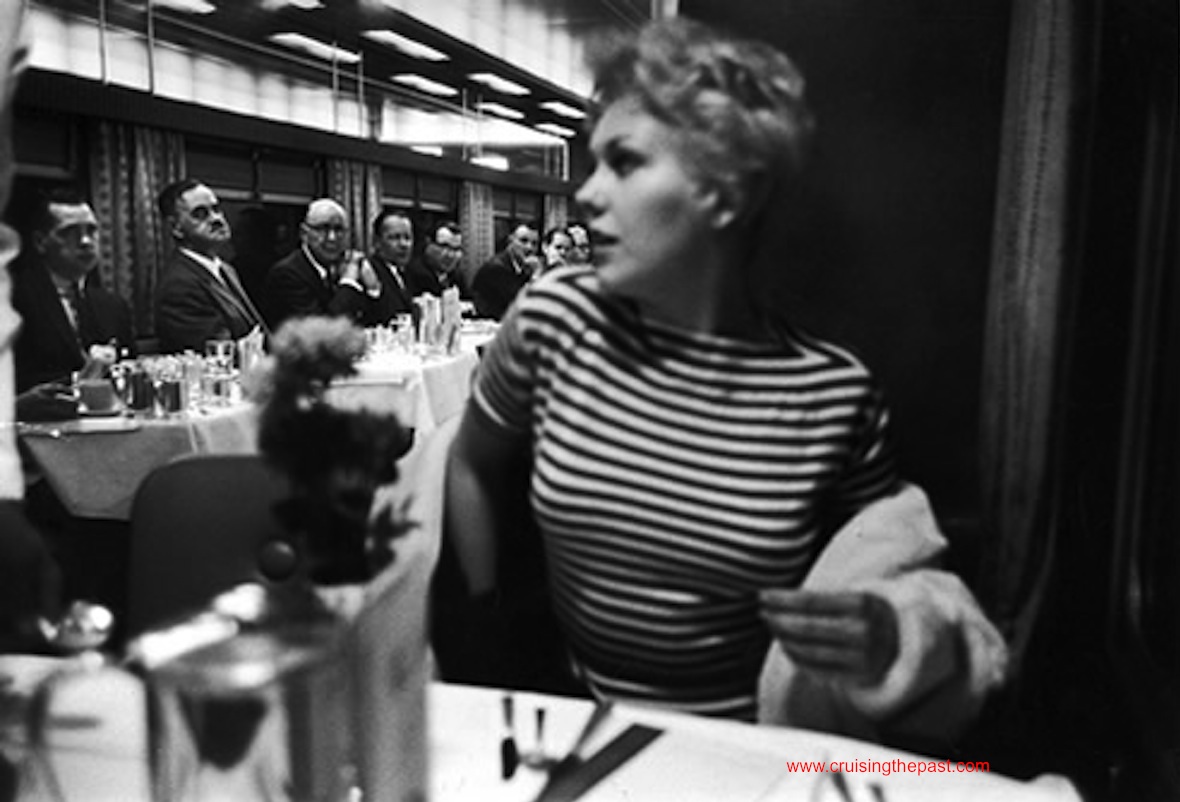 Movie-star Kim Novak in the dining car on the New York bound 20th Century Ltd in 1956.  Packed with businessmen, all eyes are on the beautiful celebrity.

The 20th Century Limited had its beginnings dating back to 1902 when the train began operating between New York and Chicago (the Pennsy began operating a plush passenger train between the two cities in 1902 as well but until 1912 it was known as thePennsylvania Special). For the first thirty years the train, including its rival theBroadway Limited was quite conservative and changed little aesthetically, using standard heavyweight passenger equipment and traditional steam locomotives. However, when the streamliner craze began to take root in the 1930s that all changed.  The PRR and NYC were constantly watching each other to make sure that neither upstaged the other. In the case of streamlining it was the Central which got things started.

In 1936 the NYC experimented and custom streamlined its Mercury which operated between Detroit and Cleveland. That same year, rather pleased with the results of the Mercury, the Central began to seriously consider also streamlining its flagship. With no streamlined train yet of it’s on, after hearing of this the PRR approached the Central wondering if the latter would be interested in a joint effort of streamlining their flagships, which the NYC agreed to.  The builder of their trains was the industry standard of the day, the Pullman Company (of which the Pullman-Standard division built the actual equipment). What’s interesting is that both trains, from a blueprint standpoint were virtually identical as Pullman was well known for standardization as a cost savings tool (today, the practice is widespread). 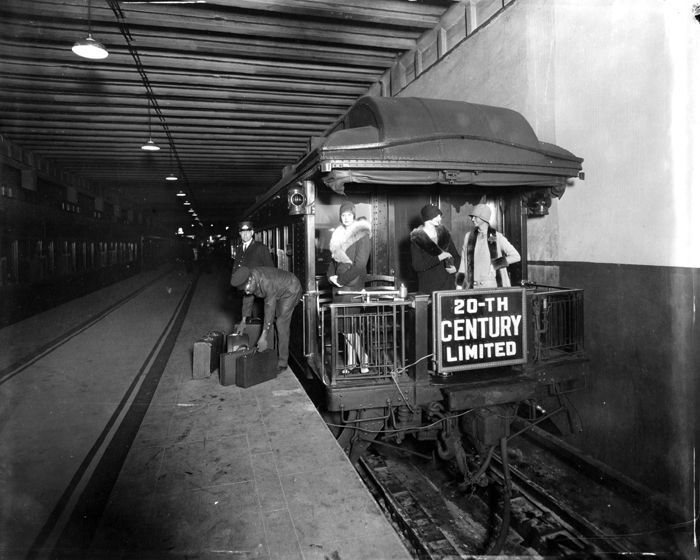 The 1930s 20th Century Limited ready to depart from Grand Central Station.  A “red carpet” was rolled out on departure for the deluxe Pullman passengers.

However, from an aesthetic standpoint the two trains could not have been more different inside and out after designers were finished adding their touches.  With its order of 62 cars the Central set to designing the new streamlined 20th Century Limited inside and out (all 62 cars were used exclusively for the flagship and a typical train included, in order, a mail-baggage car, dormitory-buffet-lounge, five sleepers, two diners, two additional sleepers, and finally a sleeper-lounge observation). To accomplish this the railroad hired distinguished industrial designer Henry Dreyfuss. What Dreyfuss created has been argued as the most beautiful and endearing passenger train worldwide of all time. Whether this is the case or not the train was certainly quite stunning.

To create Central’s flagship Dreyfuss used a process of keeping elements in their basic form when designing different aspects of the train (a concept known as “cleanlining”). Similarly Dreyfuss kept the theme of New York City and urban settings throughout the train and used tones of light and gunmetal gray for the interior and exterior (which was especially stunning inside the train matched against the urban theme). For instance, the diners served double duty. During the day they were used for general fine dining, serving exceptional meals that rivaled the most exquisiterestaurants of the day. However, after the final evening meal was served the white tablecloth linens would be replaced with rust-red linens and the car would become a nightclub known as “Café Century.” Dreyfuss also broke up the dining cars to make passengers feel less like they were in railroad cars and more as if they were in an actual restaurant using glass wall partitions.

Perhaps Dreyfuss’ crowning achievement with the train was the sleeper-observation. Here he used urban murals, soft lighting, the train’s ubiquitous gunmetal gray colors, and touches of partitioning to group passengers together in seating of twos or threes (which featured blue leather upholstery). Coupled with Art Deco artistry and the car was something to behold. As Loewy had done with the Broadway, in the 20th Century Limited Dreyfuss, near the back of the car, partitioned the observation sectioning off the extreme end of the car (by way of a large urban mural and a rounded loveseat with table) where it featured seating facing towards the windows so passengers could watch the landscape retreating away from them.

Unlike the Pennsylvania, which never bothered to match its locomotives with the rest of train, Dreyfuss and the Central kept everything linear using tones of gray for the livery. The locomotive, a streamlined Hudson became one of the most endearing streamlined steam designs ever conceived. The locomotive featured matching colors, of course, and Dreyfuss gave it subtle, yet, unmistakable sheathing whereby the running gear was exposed for everyone to witness and take in the power of the locomotive in motion yet with elegant curves and angles to make it appear in motion, even when it wasn’t!

The signature trait of the steamer was its bullet nose and distinctive protruding fin, which wrapped vertically all of the way up the nose and was given a flushed finish all of the way back to the cab of the locomotive. All in all, everything from the leading Hudson to the sleeper observation, inside and out, exuded speed, elegance, and royalty. The 20th Century Limited was built for style and stardom (the train conveyed the New York lifestyle) and it tailored perfectly to young executives and “new money.” So popular was the train that the Central often had to run to trains, one in each direction.

Both the PRR and NYC misread the boom in WWII traffic and purchased millions in upgrades for its passenger fleet and as rail travel began its slow recession in the 1950s both likewise lost millions on the gamble. While the Central purchased more in upgrades than the Pennsy it was also the first to call it quits with its flagship. In 1967, the same year that the PRR dropped “All Pullman” status on its Broadway Limited the NYC discontinued its20th Century Limited, an ominous sign of just how derelict the passenger rail market was by that time. While arguments will persist over which train, the 20th Century Limited or Broadway Limited, was most regal both reigned supreme in the east. Each train’s renowned status can be measured purely on how well it is remembered where after decades since each were operated by their original creator they continue to talked and written about.