NEWS: New TITANIC BOARD GAME has docked at Walmart and Target! 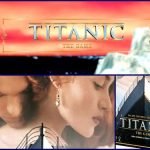 The new RMS TITANIC game is based on James Cameron’s massively successful 1997 movie Titanic, catapulting its stars Leonardo DiCaprio and Kate Winslet into Hollywood super-stardom. Spin Master Games has used the 1997 movie Titanic for its inspiration for the game, pulling the characters that Cameron used in the movie ... END_OF_DOCUMENT_TOKEN_TO_BE_REPLACED