Ferry Building and the gateway to San Francisco 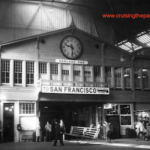 Southern Pacific’s OAKLAND PIER in the 1950s was the gateway to San Francisco. The Oakland Long Wharf, later known as the Oakland Pier or the SP Mole was a massive railroad wharf and ferry pier in Oakland, California. It was located at the foot of Seventh Street. Ferry approaching San ... END_OF_DOCUMENT_TOKEN_TO_BE_REPLACED