Southern Pacific’s Oakland Mole was the gateway to San Francisco 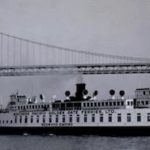 The Oakland Long Wharf, later known as the Oakland Pier or the SP Mole was a massive railroad wharf and ferry pier in Oakland, California located at the foot of Seventh Street. Southern Pacific and the Western Pacific trains arrived and departed from the SP Mole in Oakland. Passengers then went ... END_OF_DOCUMENT_TOKEN_TO_BE_REPLACED

Cruise Ship History: When going by ship from San Francisco to Portland was faster than the train and cost $38.40 round-trip first class.

The Great Northern Pacific Steamship Company was formed by James Hill on September 30, 1914. The line was to compliment the passenger train service on the Astoria Line and compete with the Southern Pacific trains to San Francisco. The company operated two ships, the S.S. Great Northern and S.S. Northern ... END_OF_DOCUMENT_TOKEN_TO_BE_REPLACED