Cruising on the SS Yale and the SS Harvard between San Francisco and Los Angeles during the “Roaring Twenties”! 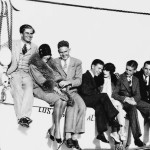 The SS Yale and SS Harvard became known as “white Flyers of the Pacific”! The sister ships each made four sailings a week, carrying 565 First Class passengers at an average speed of 23 knots between the two major California cities. The fast coastal ships provided an overnight cruise on the ... END_OF_DOCUMENT_TOKEN_TO_BE_REPLACED