Hitchcock’s Strangers On A Train – The Congressional Limited – Trains in the Movies! 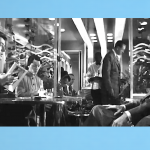 Pennsylvania’s express train between New York and Washington D.C. was featured in Alfred  Hitchcock’s Strangers on a Train. The 1951 American psychological thriller film noir was based on the 1950 novel Strangers on a Train by Patricia Highsmith. Director Producer Alfred Hitchcock shot the hit movie in the autumn of ... END_OF_DOCUMENT_TOKEN_TO_BE_REPLACED