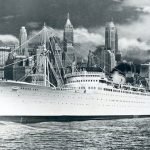 Arosa Line was the trade name for Compañia Internacional Transportadora. The steamship line bought older ships, sailing Trans-Atlantic and on winter cruises out of New York. Thousands of emigrants came from Europe to Canada and the USA on their four ships. In 1949, the shipowner Rizzi had bought his first ... END_OF_DOCUMENT_TOKEN_TO_BE_REPLACED