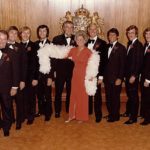 Swedish American Line’s (SAL) trans-Atlantic route played an important part in the 20th-century for emigration from Scandinavia to North America, as well as for business and recreational travel. The company and its ships were the pride of the nation, and the youngest of the liners were always the flagship of ... END_OF_DOCUMENT_TOKEN_TO_BE_REPLACED

MS KUNGSHOLM on Carribean Cruise – by 1941, with the war in Europe, most liners were not crossing the Atlantic. For the following informain we wish to thank Lars Hemingstam and his excellent website on the Swedish American Line – click here to visit. “The young man—his name was Ray ... END_OF_DOCUMENT_TOKEN_TO_BE_REPLACED