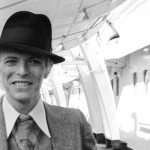 David Bowie (8 January 1947 – 10 January 2016), who starred in the film The Man Who Fell to Earth, had a long-standing fear of flying. Bowie sailed aboard Cunard’s QE 2, the Italian Line’s Leonardo da Vinci, P&O-Orient Line’s Oronsay and Canberra along with many other ships.   So while ... END_OF_DOCUMENT_TOKEN_TO_BE_REPLACED