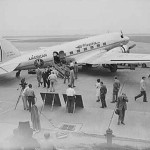 In the late twenties and early thirties, American Airways was created through the acquisition of dozens of smaller airlines throughout the United States. Great video of American Airlines in the 1930s… Like most airlines at the time the company profited by carrying United States mail. In 1934 American Airways Company ... END_OF_DOCUMENT_TOKEN_TO_BE_REPLACED

KLM – THE OLDEST AIRLINE IN THE WORLD GOES WITH BIOFUEL

CRUISING THE PAST: KLM – THE OLDEST AIRLINE IN THE WORLD GOES WITH BIO-FUEL. Dutch airline company KLM inaugurates a biofuel flight on one of its passenger carrying 747’s – a combination of 50% biofuel and 50% jet fuel. The biofuel being used in this KLM flight will be made ... END_OF_DOCUMENT_TOKEN_TO_BE_REPLACED