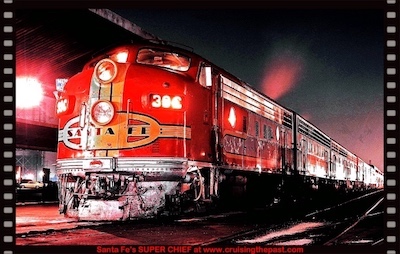 From the late 1930s to the 1950s, Hollywood adopted the Super Chief as the primary mode of travel as well as the subject of novels and motion pictures. Drawing Room on the Super Chief The SUPER CHIEF in Pasadena, California after arriving from Chicago. Lounge on the Super Chief. Super Chief dining car at the end of the 1930s… The total load for all four sections in operation at the same time was about 500 passengers. It was one of fastest trains in the world. Onboard crews included train engineers, conductors, and brakemen, Pullman conductors, Pullman porters, dining car stewards, waiters, cooks, bartenders, lounge attendants, along with cleaning crews at both ends of the line and maintenance crews en route. At times, during the history of the train, there were barbers, maids, and valets.