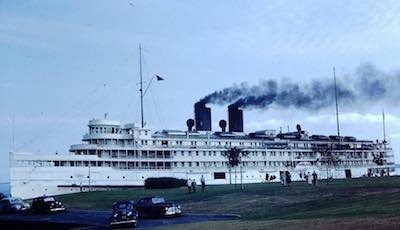 SS CITY OF CLEVELAND on a Labor Day Cruise in 1947

The SS City of Cleveland was a night boat operated by the Detroit and Cleveland Navigation Company, often abbreviated as D&C, was a passenger shipping company on the Great Lakes. The SS City of Cleveland III maiden voyage for the season.

The SS City of Cleveland III was a grand lake ship and a First Lady of the Lakes.  The City of Cleveland III had very ornate public rooms and spacious accommodations.

The ship offered comfortable staterooms and excellent meals, with all the elements of cruising including dancing, deck games, and leisurely activities. The C & D Co.  main route was between Detroit, Michigan, and Cleveland, Ohio.

Routes also lead to Buffalo, New York with the purchase of the Detroit and Buffalo Steamship Company in 1909.

The SS City of Cleveland.

Charters and day-trips were also offered. Most scheduled sailings were overnight sailings, landing in the morning after departure.

Each ship was painted with a black hull and white superstructure and white lettering. By 1949, the ships wore all-white paint with blue lettering.

The popular line operated from 1868 to 1951 and is often referred to as the owner of many of the Great Lakes’ best ‘Floating Palaces’ and ‘Honeymoon’ ships.