SOS SS UNITED STATES – IS THE FAMED LINER HEADING TO THE SCRAP YARDS? The SS United States sits indefinitely at a pier in Philadelphia, but she was designed to move fast: Her knifelike prow could cut through the ocean at 44 knots. Inset: The luxury liner crossing the Atlantic in the 1960s.

SOS FOR THE SS UNITED STATES – PLEASE HELP SAVE HER! Will the famed liner survive 2010? Walt Disney signing an autograph for a young fan aboard the SS United States during a 1950s crossing from New York to Europe.  Both Disney and the boy are wearing party hats – it was probably Captain’s night aboard the famous vessel.  The SS United States held the trans-Atlantic speed record. Philadelphia lunching Ikea shoppers have a view of the SS United States, at Pier 82 since 1996.

Bill Clinton was in his first term as president when the peeling hulk of the SS United States was towed up the Delaware River for temporary moorage. The massive ocean liner has now idled in the shadow of the Walt Whitman Bridge for so long that its 12-story stacks are virtually part of Philadelphia’s skyline, hardly noticed by the thousands who drive overhead each day.

But the once-grand ship could soon slip away as quietly as it arrived. The glamour and speed of the SS United States attracted celebrity passengers, including Jackie Gleason (top left) and John Wayne (top right). Above: The first-class ballroom, which was auctioned with the rest of the interior fittings in 1984. (Jackie Gleason and John Wayne photographs by Big U Photos. Interior photograph by Mark Perry Collection)

Its owner, Star Cruises of Hong Kong, has put the vessel up for sale. Though the United States was the world’s fastest, and arguably most luxurious, liner when it made its maiden voyage in 1952, career prospects for middle-age ocean liners aren’t particularly bright these days.

“Scrap” gets mentioned a lot. 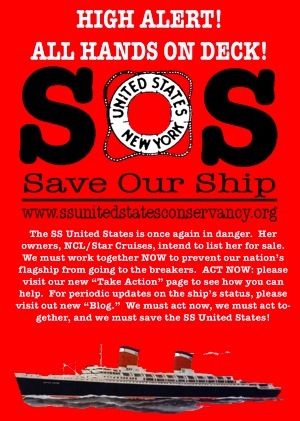