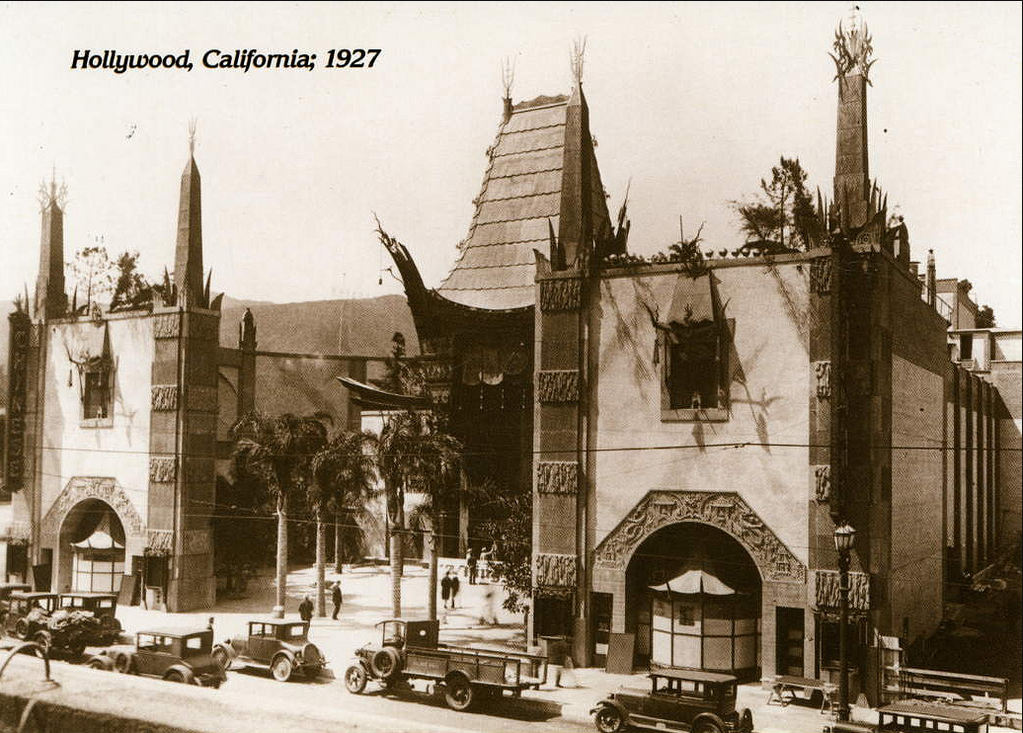 SOCIAL HISTORY: After his success with the Egyptian Theatre, Sid Grauman turned to Charles E. Toberman to secure a long term lease on property at 6925 Hollywood Blvd. Toberman contracted the architectural firm of Meyer & Holler (who had also designed the Egyptian) to design a “palace type theatre” of Chinese design. Grauman’s Chinese Theatre was financed by Grauman, who owned a one-third interest, and his partners: Mary Pickford, Douglas Fairbanks, and Howard Schenck. The principal architect of the Chinese Theatre was Raymond M. Kennedy, of Meyer and Holler.

During construction, Grauman hired Jean Klossner to formulate an extremely hard concrete for the forecourt of the theatre. Klossner later became known as “Mr. Footprint,” performing the footprint ceremonies from 1927 through 1957. 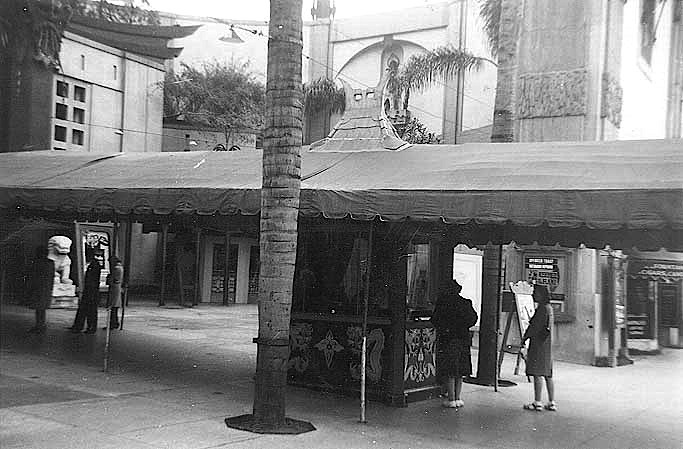 There are many stories regarding the origins of the footprints. The theater’s official account in its books and souvenir programs credit Norma Talmadge as having inspired the tradition when she accidentally stepped into the wet concrete. However, in a short interview during the September 13, 1937, Lux Radio Theatre broadcast of a radio adaptation of A Star Is Born Grauman related another version of how he got the idea to put hand and footprints in the concrete. He said it was: “pure accident. I walked right into it. While we were building the theatre, I accidentally happened to step in some soft concrete. And there it was. So, I went to Mary Pickford immediately. Mary put her foot into it.” Still another account by Jean Klossner (the construction foreman at the time) recounts that Klossner autographed his work next to the right-hand poster kiosk and that he and Grauman developed the idea then and there. His autograph and hand-print, dated 1927, remain today. The theater’s third founding partner, Douglas Fairbanks, was the second celebrity, after Talmadge, to be immortalized in the concrete. 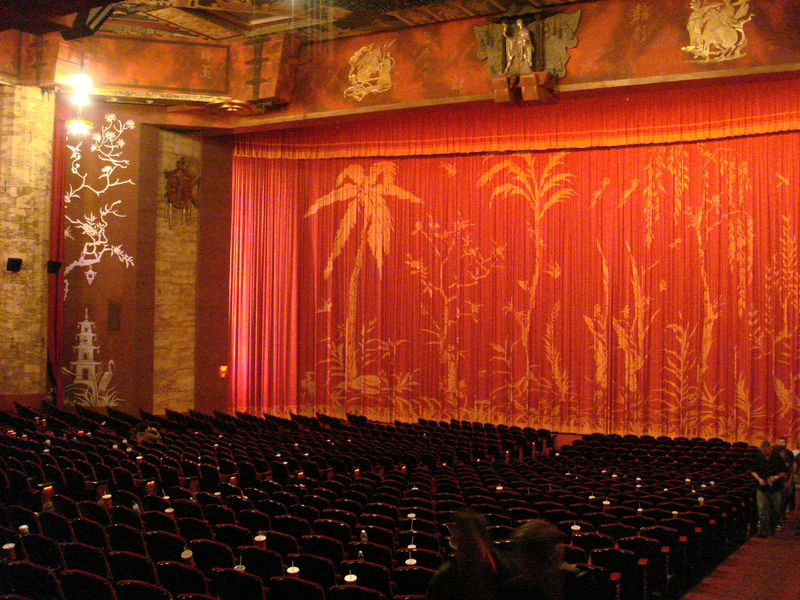 Sid Grauman sold his share to William Fox’s Fox Theatres chain in 1929, but remained as the theater’s Managing Director until his death in 1950. Charles Skouras bought the Chinese Theatre which became part of a chain of theatres for his company known as Fox West Coast Theatres. John Tartaglia (also see artist of Saint Sophia (Los Angeles) became the Head Interior Decorator of Grauman’s Chinese Theatre as well as the chain of theatres, then owned by Fox West Coast Theatres, in 1952. He would later carry on the work of Jean Klossner, by recommendation of J. Walter Bantau, for the Hollywood Footprint Ceremonies. John performed his first ceremony as a Master Mason for Jean Simmons in 1953, for the first premiere in Cinemascope of “The Robe”. Although Jean’s replacement was initially thought to be a temporary job for John Tartaglia, his dedication to the job would last as a 35-year career in which he last performed as the Master Mason/Cement Artist in honor of Eddie Murphy in May 1987 – thereby leaving behind one of the greatest legacies in Hollywood.

The Chinese Theatre was declared a historic and cultural landmark in 1968, and has undergone various restoration projects in the years since then. In 1973 it was purchased by Ted Mann, owner of the Mann Theatres chain, and husband of actress Rhonda Fleming. From then until 2001 it was known as Mann’s Chinese Theatre. In the wake of Mann’s bankruptcy, the theatre, along with the other Mann properties, were sold in 2000 to a partnership of Warner Bros. and Paramount Pictures, who also acquired the Mann brand name.

In 2002 the original name was restored to the cinema palace, although the other theatres in the attached Hollywood and Highland mall retain and continue to operate under the name Mann’s Chinese 6 Theatre.

In 2008, the land the theatre sits on was sold to the CIM Group for an undisclosed price. Mann Theatres continues to have a long-term lease on the venue for movie premieres and will continue to operate it as a film house. The land was sold to CIM by the Damon Runyon Cancer Research Foundation of New York and Barlow Respiratory Hospital of Los Angeles. CIM Group also owns the Hollywood and Highland retail mall next door to the Chinese Theatre, as well as numerous other residential and commercial properties in Hollywood.

On May 27, 2011 both Grauman’s Chinese and the adjacent Mann Chinese 6 were purchased by nightclub owner/producer Elie Samaha and producer Donald Kushner as Chinese Theatres, LLC.

The exterior of the theater is meant to resemble a giant, red Chinese pagoda. The architecture features a huge Chinese dragon across the front, two Authentic Chinese Ming Heavens dogs guard the main entrance, and the silhouettes of tiny dragons up and down the sides of the copper roof. To the dismay of many fans of historic architecture, the free-standing ticket booth was removed (which was not original to the theatre, but rather installed in the 1930s), along with the left and right neon marquees—but their absence brings the theatre back closer to its original state. The auditorium has recently been completely restored along with much of the exterior, however, the wear and tear on the physical structure over the years has caused some of the external décor to be removed, rather than repaired.

In 1944, 1945, and 1946 the Academy Awards ceremonies were held at the Chinese Theatre; they are now held at the adjacent Kodak Theatre.

Grauman’s Chinese Theatre continues to serve the public as a first-run movie theater. Many Hollywood films have had their premieres at the Chinese Theatre throughout its history. 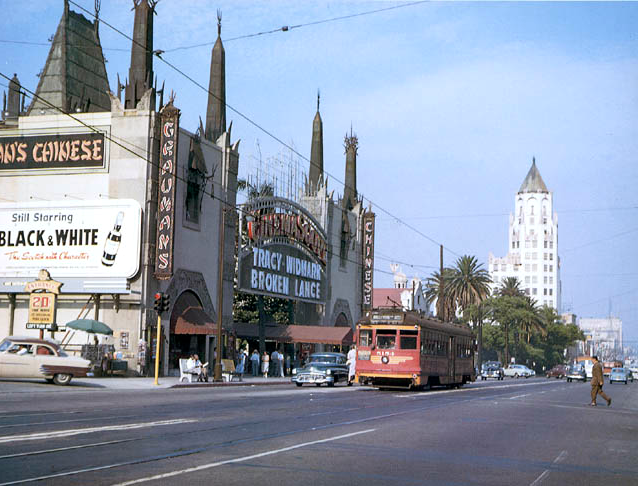 Today its premieres are attended by celebrities and large throngs of fans as they have been since 1927.