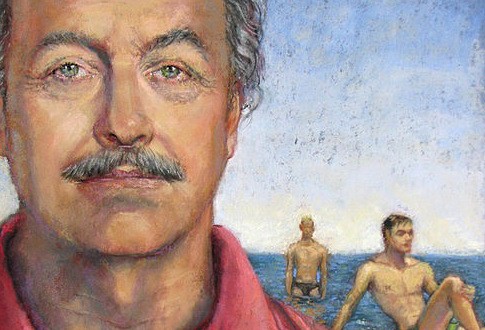 Juan Bastos and portrait of Rose… Many of Bastos’ paintings conjure up an earlier epoch, a more gracious and leisurely age, when people embarked on grand tours, collecting bibelots along the way and having their likenesses rendered by the leading painters of the day.

Portraiture is on the rise.

The sophistication and formality of earlier masters has lately cropped up in the works of leading contemporary portrait painters such as Bastos. His skills, and those of his peers, are feverishly sought after by clients who just a few years ago would no sooner have commissioned a portrait than they would stay home on New Year’s Eve.

During most of postwar art history, portraiture of prominent subjects, and especially commissioned portraits, were associated with fawning, sentimentalized images of children clutching flowers, crusty dowagers and overfed captains of industry. But the genre, once the art world’s fallen woman, has dusted itself off and reclaimed its respectability.

Now everyone from Joan Rivers to Madonna to Donna Karen wants to be immortalized in oil. (Penelope – The Annunciation by Bastos)

Penelope Weld, a New York social figure was quoted in the NY Times saying: “Most of these people don’t have famous ancestors or family portraits — but you’ve got to start somewhere.” Ms. Weld commissioned a portrait of herself by Bastos. He captures people’s sense of history. They want to connect with the century they’re in.

For some people, sitting for a portrait is an act of self-expression, something like having a couture dress designed or a room lavishly redecorated. For others, however, a sitting can be more profound. Ms. Weld, who elected to pose in the attitude of the Annunciation, said the painting, which hangs behind a curtain in her Upper West Side living room, meant for her eyes only, was symbolic, intended to celebrate the fact that she was receptive to her own creative impulses.