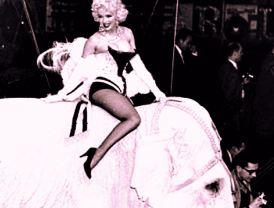 New York opening with Marilyn Monroe riding a pink elephant in the 1950s.

John Ringling North knew that every season was vital to the circus to open its season at New York’s Madison Square Gardens, not only because of the big box office but because of the national media attention. Opening night would always benefit a charity with stars such as Marylyn Monroe, Marlena Dietrich or even Hopalong Cassidy as guest headliners. Critics ballyhooed each season with praise. John Ringling North with senior management at the circus opening.

Showered with praise and celebrity, North was the Circus King of Manhattan. He stayed at the old Ritz Car or Waldorf Astoria. He was a nocturnal creature his suites would be masked to keep out the sunlight since he would arise in the late afternoon. Chauffeured around in his Cadillac limousine, he would make calls and handle business for the large circus operation. From the AP: New York – Martine Carroll, the French actress who arrived in New York on the S.S. America, learns something about New York nightlife as she sits in El Morocco with John Ringling North of the Ringling Bros. Barnum & Bailey Circus. Broadway gossips link their names romantically. Mrs. John Ringling North on the terrace of her home in Sarasota, Florida in 1942.

North’s only marriage was in 1940 to another beautiful French actress Germaine Aussey. They were divorced three years later. John liked New York, but he loved traveling with the show and was the lynchpin to keeping it moving.

They were not only drawn to North, but the circus pandemonium and hullabaloo, something all of them knew from childhood. A late supper and a night on the town were far more exciting than sitting in a stuffy box at the Met watching the fat lady sing. North sailing on the French Line’s Ile de France from New York to Europe in the 1950s to scout for new acts.

In the years he led the circus, North would pack his steamer trunks each summer and cross the pond on trans-Atlantic liners, he didn’t like to fly, heading for the theaters, nightclubs, village fairs and circuses of Europe looking for performers with new acts to add to his show. A troupe of Ringling Bros. elephants and a zebra, having arrived in the Bronx by circus train, head through Manhattan to Madison Square Garden in the early 1950s. There were over a thousand animals with the circus.

In the early 1960’s, John and Henry, who had purchased their father’s ancestral home in County Galway, became Irish citizens. They were both spending much more time in Europe, and both were slowly becoming ex-pats.

Both knew the circus was a terribly demanding mistress, whose service precludes her people’s living a normal life. Both felt they should live as other people do, for a while at least. The Circus is sold.

The heirs of the Ringling brothers decided to sell the circus in 1967, ending more than 80 years of family control. The buyers were two brothers successful in show business, Irvin, and Israel Feld. Brokered by Richard Blum, the San Francisco investment banker husband of U.S. Senator from California Dianne Feinstein was able to secure the backing of Judge Roy N. Hofheinz owner of the Houston Astrodome where the circus had recently played to capacity audiences.

True to the showman’s form, North consummated the sale in the Colosseum, site of the spectaculars of ancient Rome where emperors kept the people happy with circuses and gladiatorial contests. A Ringling Bros. elephant and a zebra, having arrived in the Bronx by circus train, head through Manhattan to Madison Square Garden in the early 1950s. There were over a thousand animals with the circus.

The late C. P. “Chappie” Fox, longtime director of the Circus World Museum in Baraboo, Wis., and undoubtedly the world’s number one circus fan was asked in a 1972 TV interview about the importance of the circus. Chappie said, “I believe that it’s important to mankind because the circus is the oldest form of entertainment known to man. It has withstood all the upheavals of history and still comes out as a great entertainment. No catastrophe has ever ruined it.”