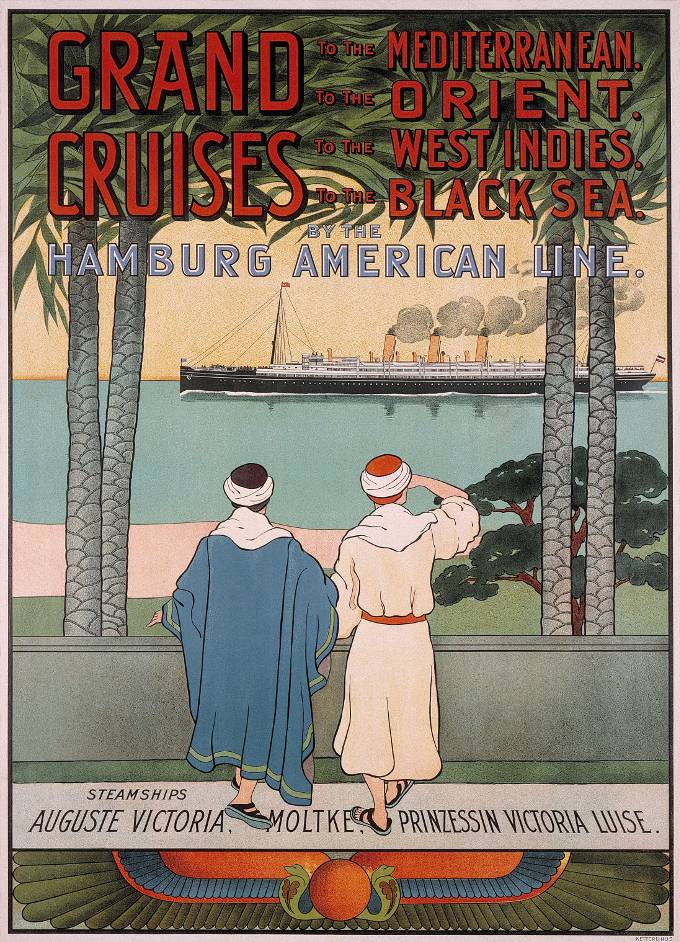 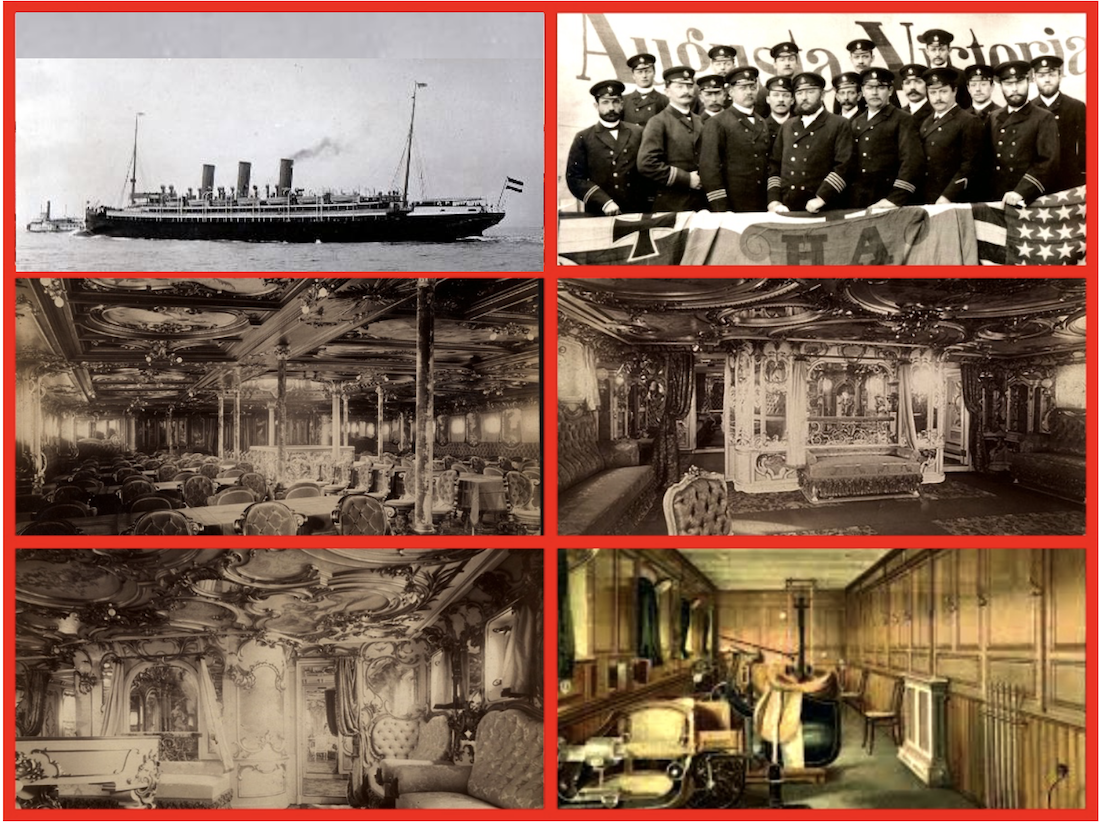 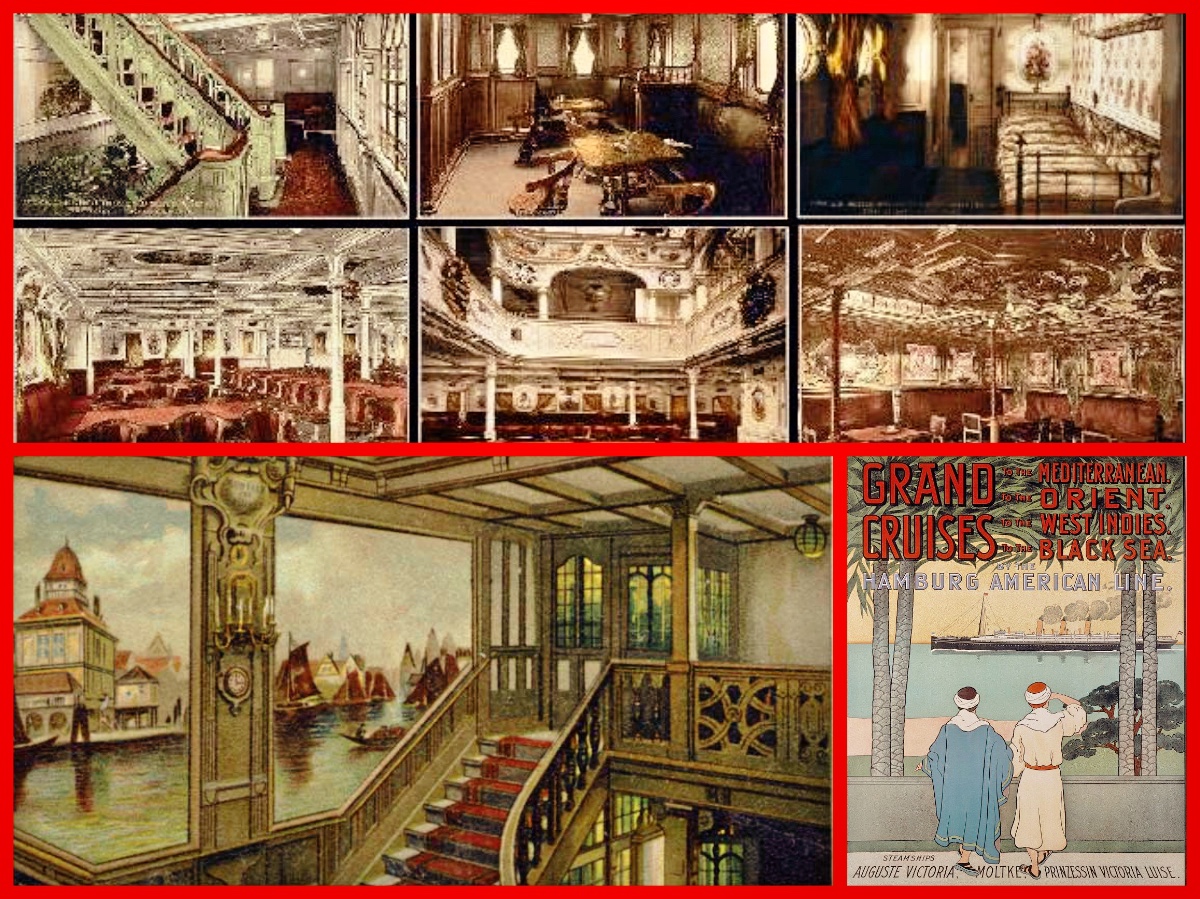 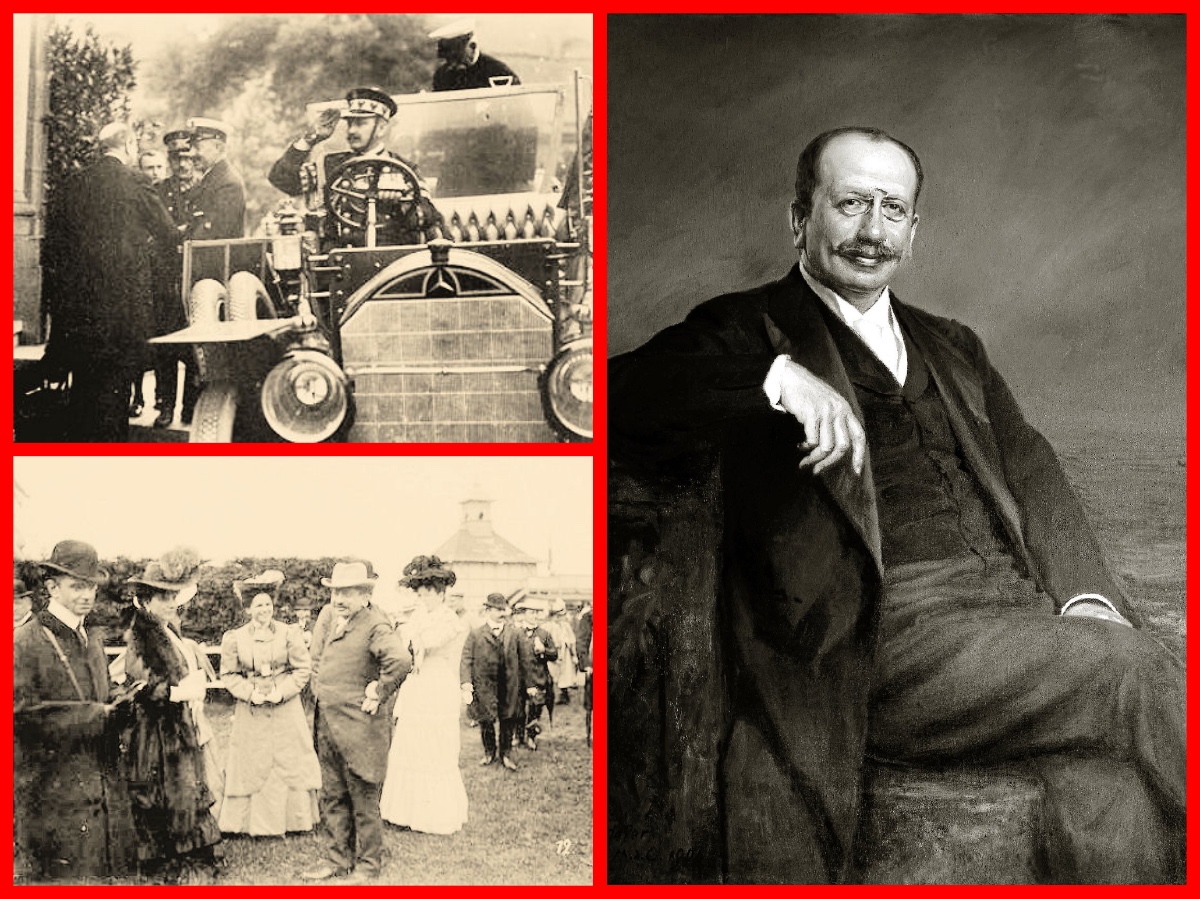 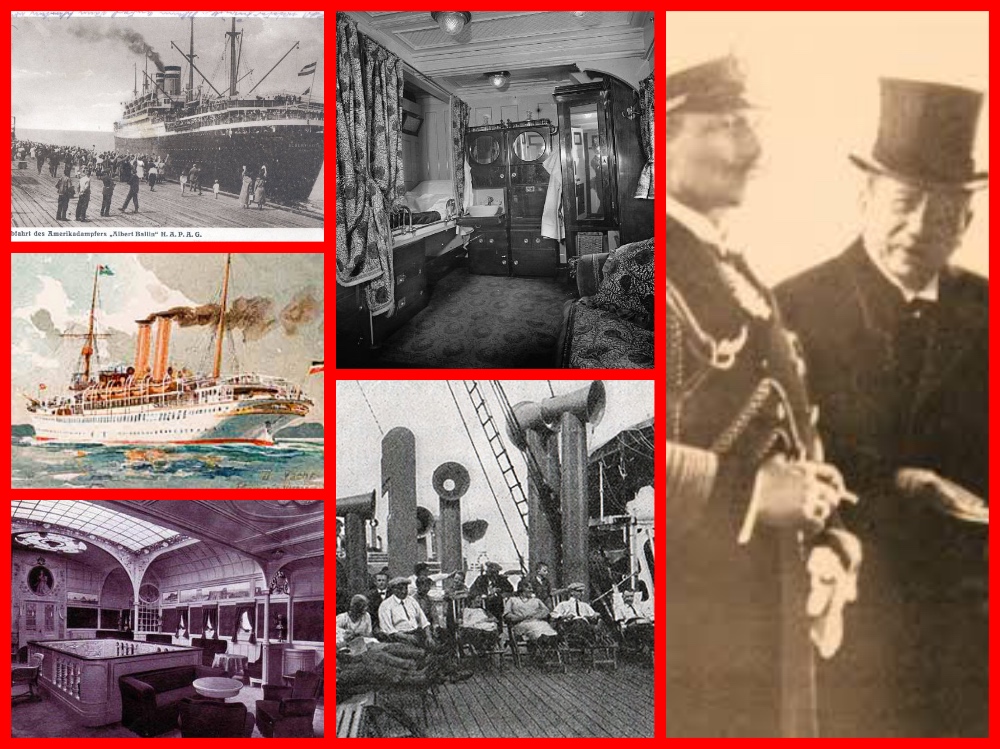 Onboard the Hapag liners and Albert Ballin with the Kaiser.

From Steerage to Luxury

Although Ballin came from a humble background and had achieved his initial success by catering to steerage passengers (Zwischendeckpassagiere), the next stage of his business rise would come from his revolutionary view that a sea voyage should be more a pleasure cruise than a test of one’s endurance. 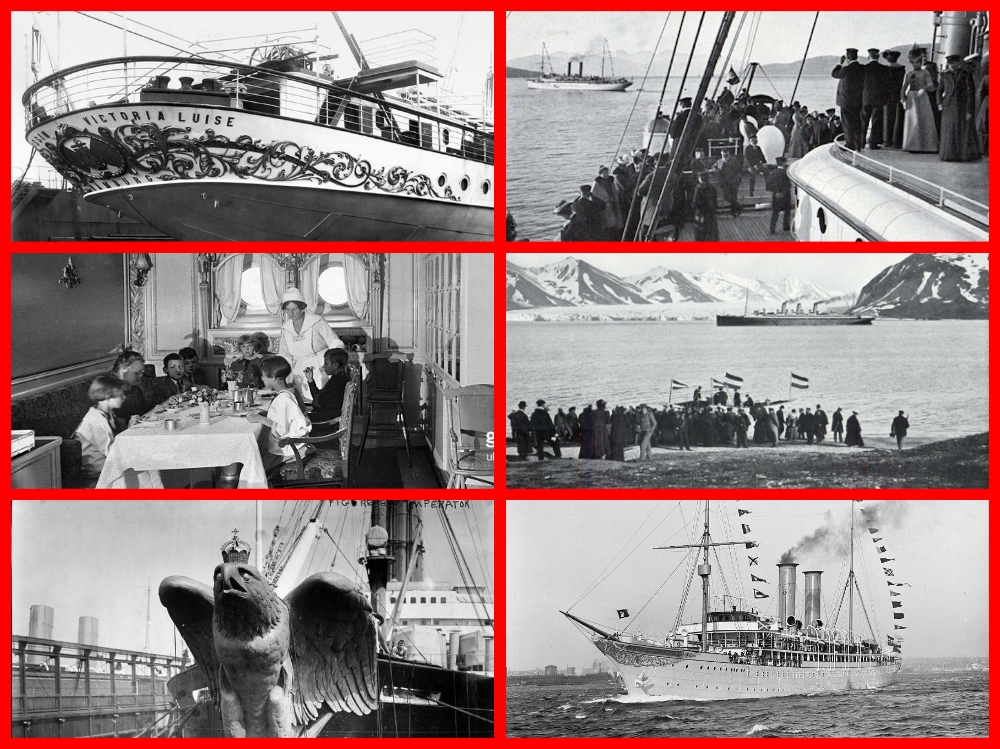 The Victoria Luis, on board the Albert Ballen and other Hapag liners. 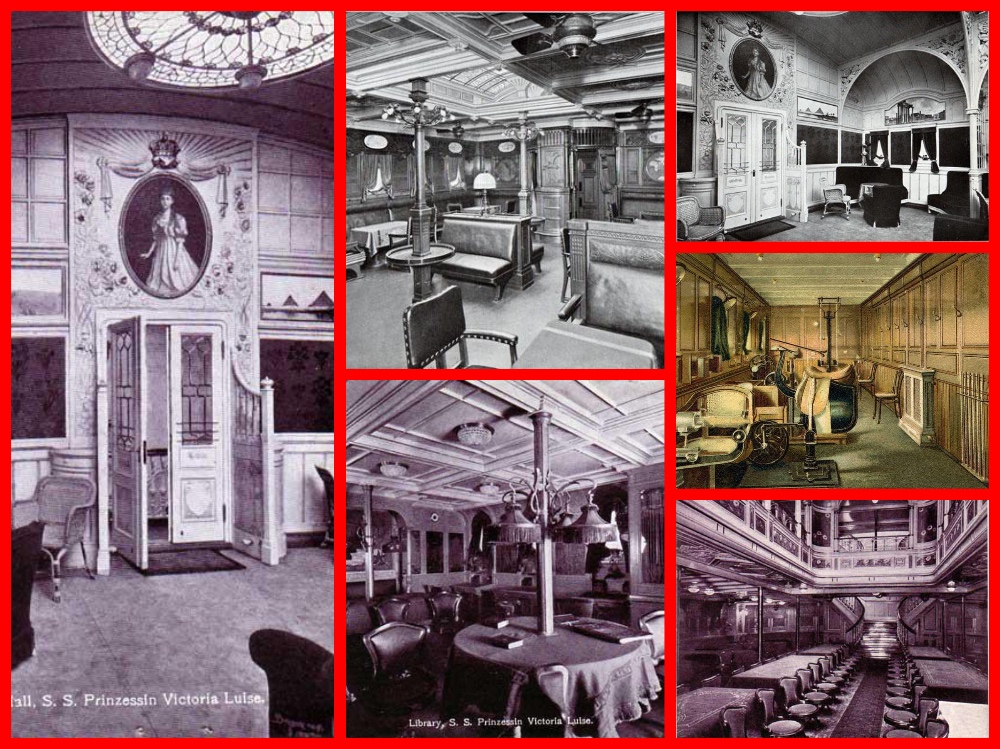 Onboard the Victoria Luise. 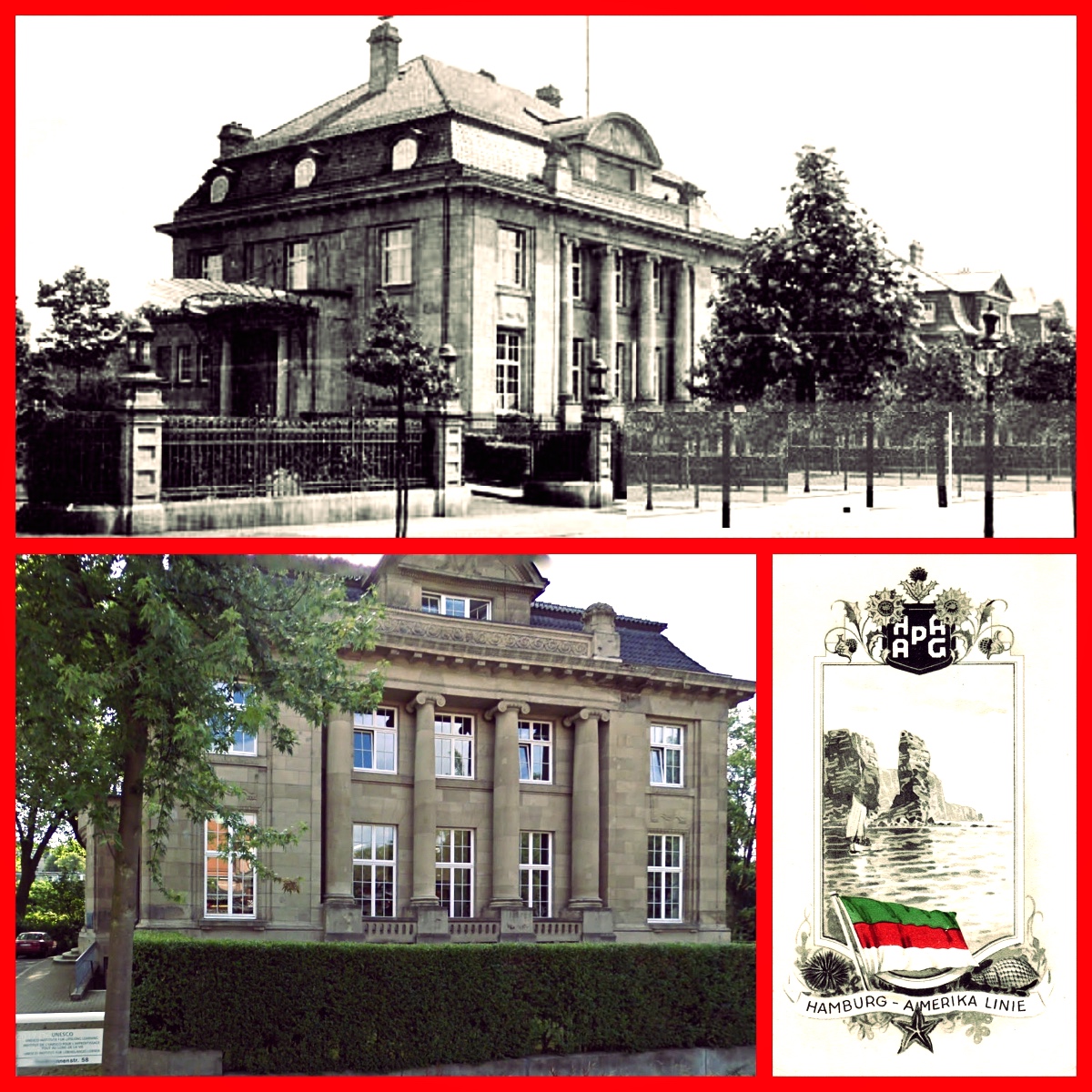 Albert Ballin’s Villa in Hamburg. The Kaiser was a frequent guest. 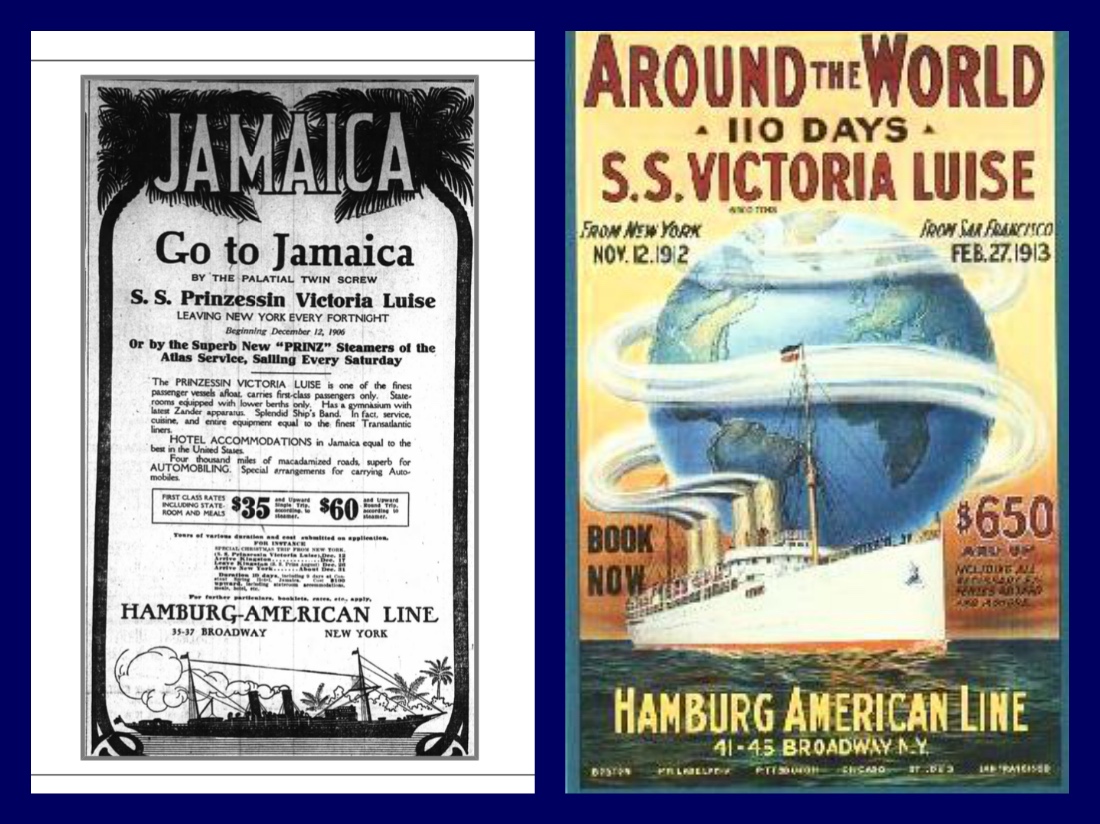 With the success of the world’s first pleasure cruise on the Augusta Victoria, Ballin offered other cruises during the off-season winter months. He then built the first ships exclusively for cruising. 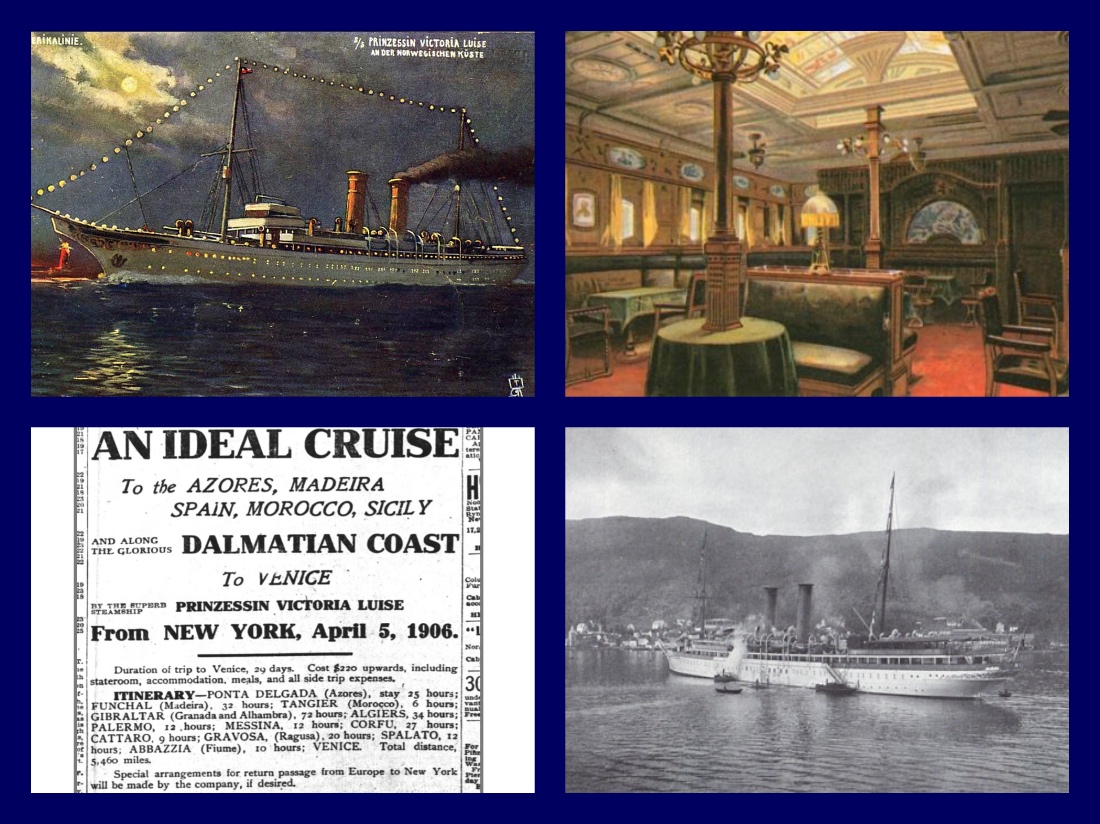 Ballin and the Kaiser 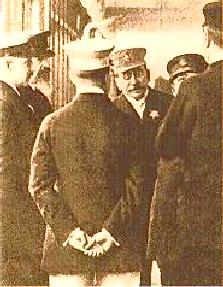 (Left: Ballin greeting the Kaiser.) As a Jew in Hamburg and German society, Ballin was subject to the anti-Semitic prejudices of the time. However, because of his important position with Hapag, not even Kaiser Wilhelm II (1859-1941) could ignore him. In fact, he often met with the Jewish shipowner to discuss the political and financial aspects of Germany’s seafaring industry.

The Kaiser was such a frequent guest at Ballin’s Hamburg villa, that it was known a bit scornfully as “Klein Potsdam” or “Little Potsdam.” (Potsdam is the site of the Prussian royal palaces, just south of Berlin.)

Some sources claim that Ballin was the only non-converted Jew with whom the Kaiser had a personal relationship. Although they were never close friends, they had a cordial relationship,

even though it was hardly a secret that the emperor and empress had low regard for Jews.

Unlike the emperor, the empress (Kaiserin) refused to set foot in Ballin’s home. But over the years Ballin often had the Kaiser’s ear, and it was not until the “Kaiser’s Jew” vigorously opposed the war, that he lost all favor with Wilhelm. 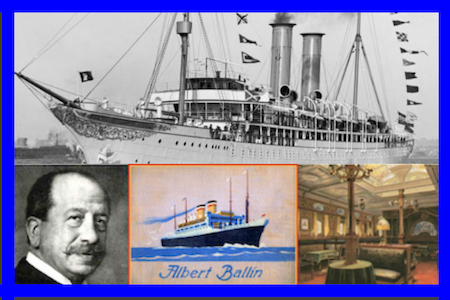 We can gain a better understanding of Ballin’s attitude about his position as a Jew in Hamburg from this biographical excerpt:

“…[Hamburg] has had a lack of capable people, at least at times. The repeated observance of this fact and finding that the citizens of Hamburg frequently lacked what Bismarck, in speaking of Germans in general, called the missing “dash of champagne in the blood” once caused Ballin to remark: “I see quite clearly what this city lacks; this city lacks 10,000 Jews. I do not, by any means, shut my eyes to the unpleasant traits of the Jews, but I still must say that for Hamburg’s development 10,000 more of them would be a blessing.” [This comment is] further testimony of Ballin’s unprejudiced point of view concerning the Jews. Although not at all orthodox, rather indifferent in his religious views, he was much too proud to deny his heritage or his religion or to change [his faith], much less “improve” his name. Of someone who had done so, he said, with bitter scorn: “He insults his father.”

– From Albert Ballin by Bernhard Huldermann. 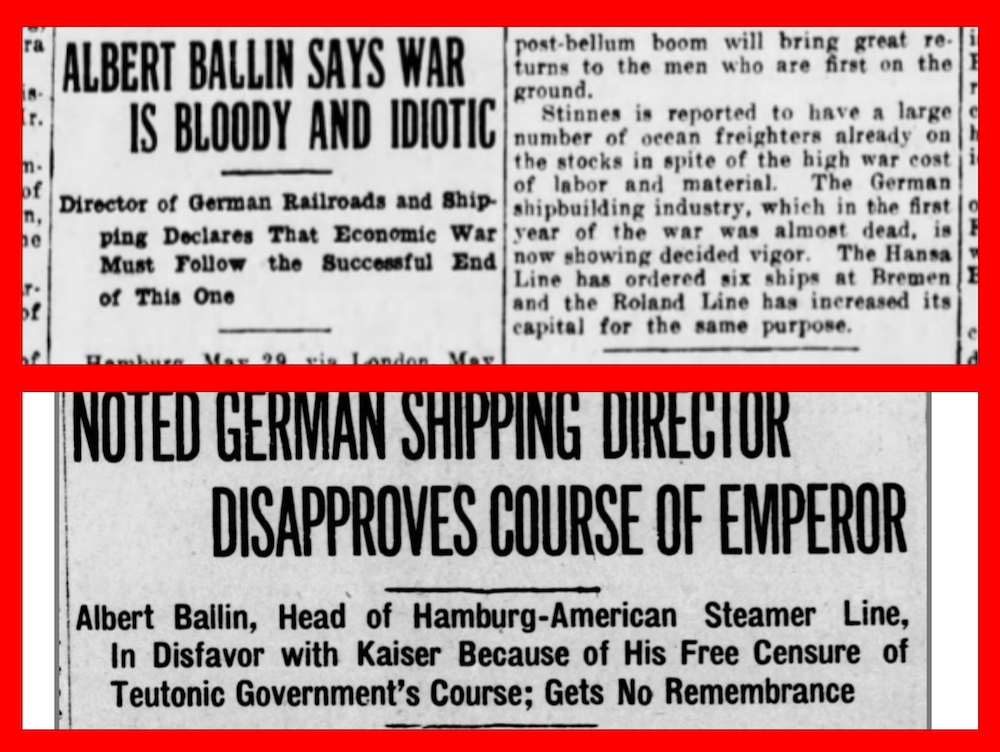 Albert Ballin in the news. He was covered extensively in American newspapers.

Before his own suicide in 1918, Albert Ballin’s older brother, Joseph, had taken his own life rather dramatically almost exactly 11 years earlier. The New York Times and other American newspapers carried the story, dated November 13, 1907: “J. Ballin, a stockbroker and a brother of Albert Ballin, …committed suicide with a revolver this afternoon in a lavatory at the local Bourse [in Hamburg].” No reason was known.

Nor do we know exactly why Albert Ballin ended his own life. But a combination of factors came together in 1918 that probably overwhelmed the shipping magnate. A war he had been against from the start was coming to a very bad end for Germany. The Kaiser, who had once been his confidant, refused to speak to him anymore and was about to abdicate his throne. Ballin was now considered a pacifist traitor by his government and many Germans. The war had destroyed Hapag, and it would be years before it could even partially recover. 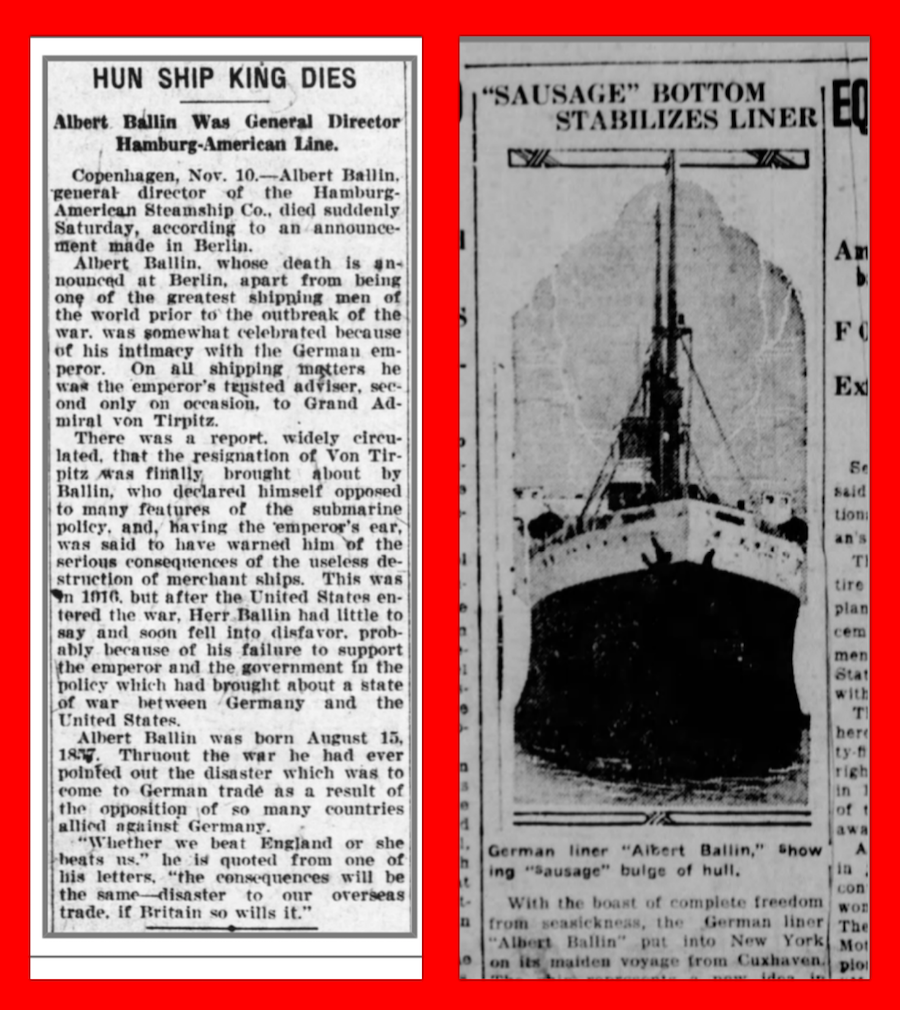 Albert Ballin dies; The SS Albert Ballin was one of the first stabilized ships. The Nazis changed the name of the ship and eradicated all references to Ballin.

If he could have seen 15 years into the future, when the Nazis came into power in 1932, he would have been even more depressed. As a Jew, he would have faced a very uncertain fate. Even in death, the Nazis tried to erase his name by changing the name of anything that had “Ballin” on it, including a ship and a street. It would be 1947 before his name would be restored in Germany.

Even without knowing that, the 61-year-old Ballin probably decided that his life’s work had come to nothing. For whatever reason, on the night of November 9, 1918, he took an overdose of sleeping pills, went to bed and never woke up.

Although Ballin’s death went largely unreported in Germany, it made headlines in the foreign press. However, the cause of death was reported as an “apoplectic stroke,” probably a cover story put out by Hapag to protect Ballin’s family. 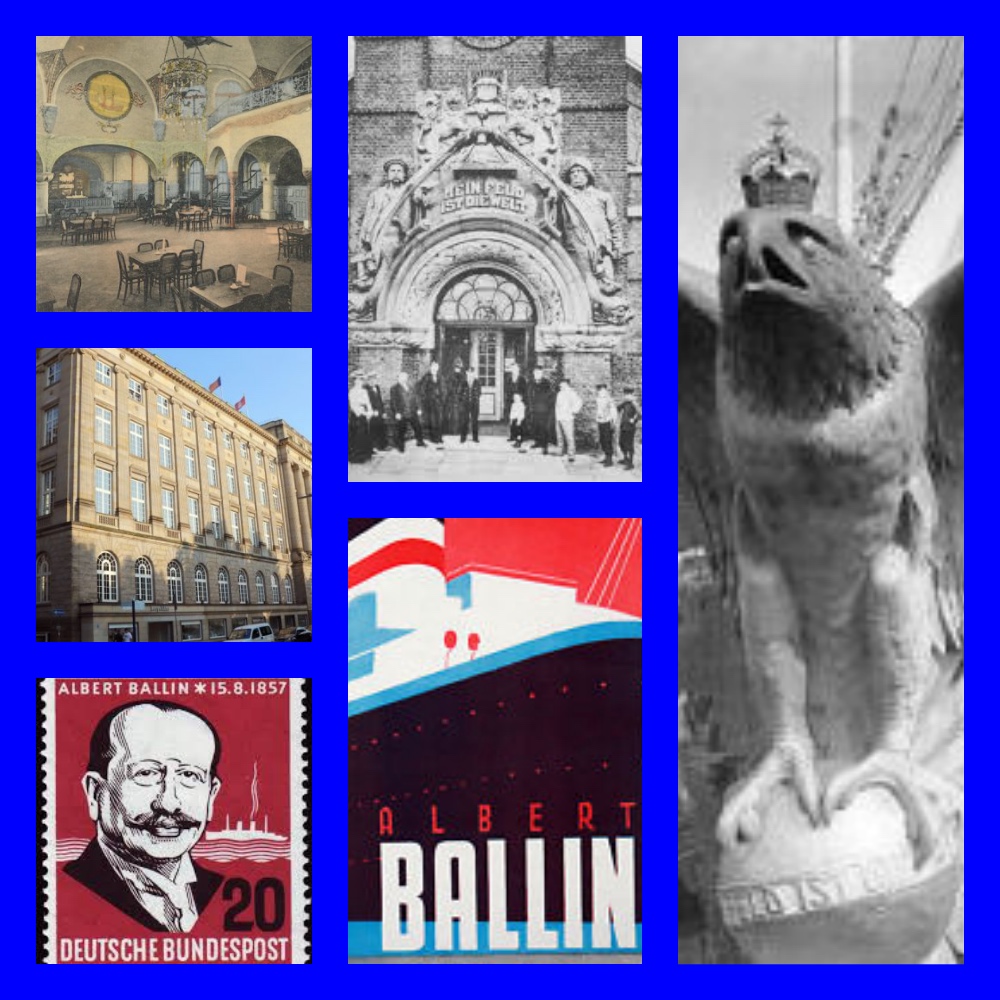 Albert Ballin’s and Hapag’s slogan was “Mein Feld ist die Welt” – which roughly translates as “The world is my oyster.” Although it may have colonialist or imperialist overtones, the saying truly reflected the worldwide coverage that the Hamburg-Amerika Linie had at its peak under Ballin. In the year before the First World War broke out, Hapag had 73 shipping routes between ports and countries all over the globe and a fleet of 175 steamships, including the three largest ocean liners in the world at that time. 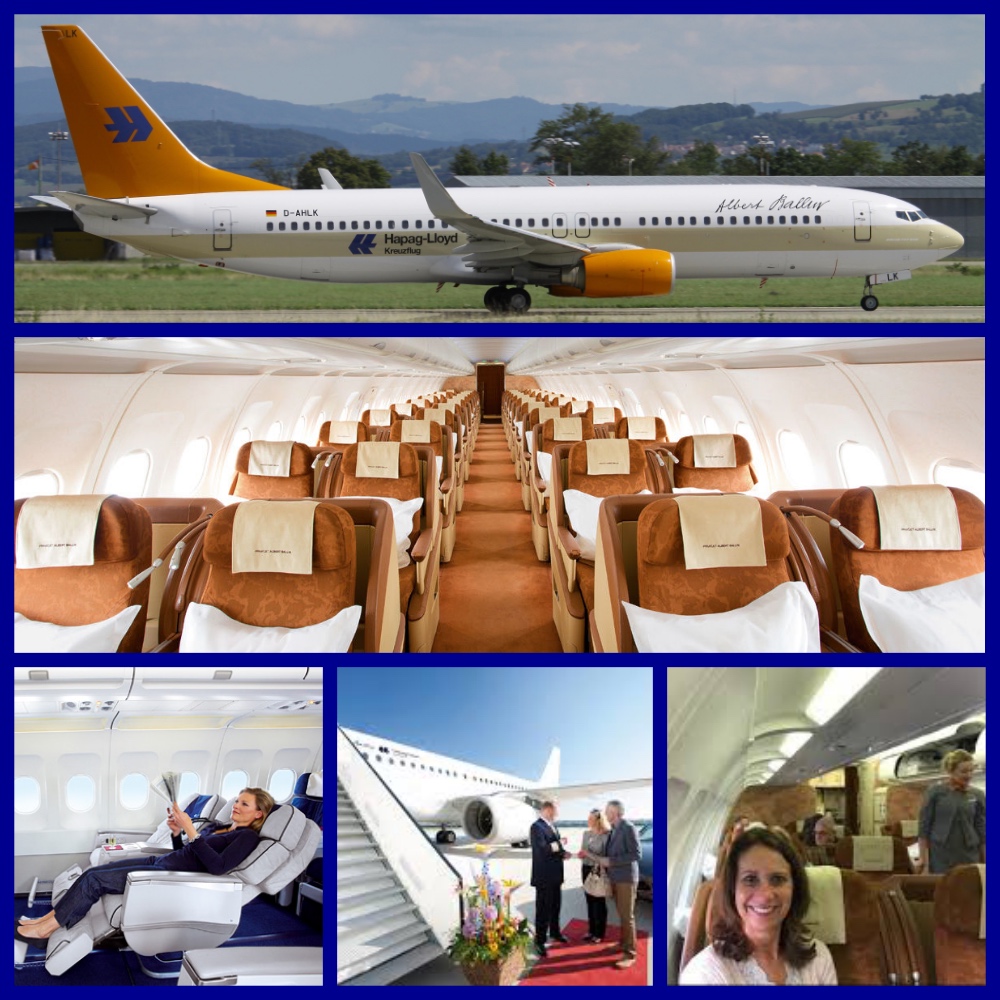