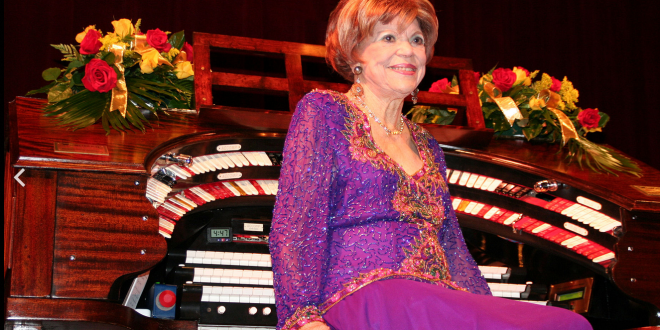 Rosa Rio, 103, at the Tampa Theatre Wurlitzer following her performance for the silent film "Beyond the Rocks" at the ATOS National Convention in May 2006.

Be sure to click on the You Tube Video arrow above – to see Rosa Rio (at 103 years old) playing the Wurlitzer Organ.

This is a two minute excerpt of Rosa playing the Wurlitzer at the Tampa Theatre in 2005. She was a 103 years old.  Rosa is playing: ‘Everything’s Coming Up Roses’ is a song from the 1959 Broadway musical Gypsy: A Musical Fable, with lyrics by Stephen Sondheim and music by Jule Styne. It was most famously sung by Ethel Merman. It is notable for its ironic placement in the show, as well its unusual use of musical triplets in the melody. At a spry 107, Rosa Rio is a testament to the will of spirit. Her extraordinarily positive, motivated and determined attitude has allowed her to seamlessly adapt to changes in the entertainment industry (silents, talkies, radio, tv, and now, back to silents). Since 1996, Rosa has performed for over 30 silent film presentations for full houses at the Tampa Theatre’s 1,400-pipe Mighty Wurlitzer Theatre Organ.

Rosa Rio was picking out melodies on the piano when four years old, & chording melodies at six. She had to wait until eight before a teacher would begin giving her music lessons, but was already adept at improvisation. When nine years old, she was asked to play piano accompaniment for a silent movie in a theatre, with the instructions “play loud & don’t stop.”

Her father removed her from the bench with an admonition that “The theatre is no place for a girl.”

This girl had a different idea about that, though.

Her parents enrolled Rosa at Oberlin College in Ohio, to prepare her for a career as a music teacher. While visiting an aunt in Cleveland, she for the first time saw a theatre organ rising from the pit & was enthralled. She then knew what she wanted to do. The Eastman School of Music in Rochester, New York, established by Eastman Kodak magnate George Eastman, maintained “a department for special instruction in the art of motion picture accompaniment”. Rosa Rio enrolled there, & was a student of organist John Hammond. Later, Rosa Rio & John Hammond would marry.

After completing her instruction at the Eastman School of Music, Rosa Rio took her first job as theatre organ accompanist at a theatre in Syracuse, New York. Next, she moved to New Orleans, studied piano with Vit Lubowski, & began her tenure with the Saenger theatres. She held the house organist position at Saenger’s Strand in New Orleans, was a feature organist at the New Orleans Saenger Theatre, & toured all the Saenger houses.

Afterwards, she took a position at the Paramount theatre in Scranton, Pennsylvania, & in 1933 became the house organist at the Brooklyn Fox Theatre, playing the second-largest theatre organ built by Wurlitzer. When the Fox organ was retired, she played at the RKO Albee, Brooklyn Paramount, RKO Patio theatres, & the Crown Theatre in New London, Connecticut.

As the heyday of the theatre organ waned, Rosa Rio also worked as an accompanist & vocal coach for singers of operatic & popular music. One longtime friend, Mary Martin, got her big break at an audition accompanied by Rosa Rio: Mary Martin sang “My Heart Belongs to Daddy” for Cole Porter, & was cast in the Musical “Leave It To Me”.

But while live accompaniment of films diminished, radio was burgeoning with opportunities. Radio drama utilized live accompaniment, there were fills & themes to play in newscasts, & entire programs of live music.

Rosa Rio was engaged to perform as a staff organist for the NBC radio network, & landed a staff assignment on New York ABC station WJZ. With just 60 seconds between shows, Rosa Rio races between studios at NBC in 1942. In 1960, having remarried, Rosa Rio moved to a new home in Connecticut. The house was outfitted with a large music room & recording facilities, and it was the new base from which Rosa Rio continued to play, teach, publish musical arrangements, & record. She continued to make excursions to conduct theatre organ workshops & accompany films, & to play concerts, occasional radio shows at stations in Ansonia & New Haven, & even a command performance for Dag Hammerskjold at the United Nations.

Many people know her work through her excellent accompaniment of a large number of silent films originally released for home viewing on videotape.

Her philosophy was play loud, and don’t stop.