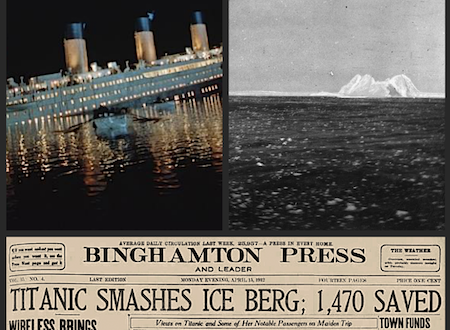 The album belonged to Louis M Ogden, a New York socialite aboard the RMS Carpathia – the ship that rescued survivors of the Titanic.

The “Unsinkable” Molly Brown comes to the rescue

The Carpathia arrived at the tragic scene where the Titanic had struck an iceberg at dawn.  The Titanic was gone, but the Carpathia found surviving passengers and crew having waited out the night in lifeboats. Ogden, a lawyer, had bought a new camera for the trip, which was still a rare thing to own unless you were wealthy.
He took pictures of the rescue – showing lifeboats approaching the ship and being brought on deck –  including lifeboat no. 6, which had the now famous Margaret Brown on board. Archibald Gracie IV, a direct descendant of the Archibald Gracie who built Gracie Mansion, the New York City Mayor’s official residence, survived the sinking by climbing on top of an overturned lifeboat.

Mr. Ogden’s scrapbook includes 500 pictures with notations from his trips to Algiers, the Sahara, Spain, Italy, Argentina, Gibralter, Switzerland, Greece and Austria with his wife in 1911 and 1912. Top: Left – Photo of the iceberg that sank the Titanic according to Ogden; Right – Photo of an iceberg near rescue site; Lower:  Left – The Ogden’s with the Carpathia captain; Right – Titanic lifeboat being hauled on board the Carpathia.

But the focus for the collector who bought the album will be the photos that show the Carpathia rescue.

While living in Florida Mrs. Ogden gifted a book about the Titanic to her ophthalmologist, which she annotated, and which he later shared with the Ocean Liner Museum.