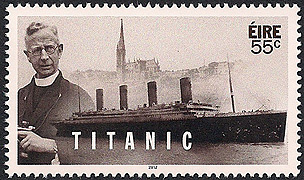 The Bishop had another surprise up his sleeve when in early 1912 he presented Frank with a first class ticket for the Maiden Voyage of the Titanic to bring him as far as Cobh. So it was that on the morning of the 12th.April 1912 he arrived at Waterloo Station in London to catch the Titanic Special. He immediately started taking photographs, first recording the train journey and then life aboard the Titanic on the initial section of the voyage. Having made friends with a wealthy American family he was offered a ticket for the remaining part of the journey and no doubt excitedly telegraphed a request for permission to go on to New York, to which he received the terse response “Get Off That Ship——Provincial!”  That telegram not only saved Frank’s life but also meant that this unique record of the voyage was saved for posterity and guaranteed overnight fame for Frank Browne SJ. He knew the value of what he had captured. In the Spring of 1913, he contacted the White Star Line’s advertising department to seek permission to use photographs and further materials in his lectures on Titanic. The reply he received is astonishing. “We shall be glad to obtain photographs of the illustrations to which you allude in the Olympic booklet but shall appreciate it if in any lectures you deliver you will abstain from any reference to the Titanic as you will easily understand we do not wish the memory of this calamity to be perpetuated.” As it transpired, a good story could not be kept down and Father Browne’s pictures were central to its telling over the last century. Browne disembarked. An enthusiastic amateur photographer (who had received his first camera from the same uncle who later bought him his ticket for the Titanic trip), he brought with him the only photos of theTitanic at sea that would survive the shipwreck.

After his near miss, throughout his life as a clergyman, Browne delivered Titanic-themed talks and continued to snap away. His photographs were lost after his death in 1960 and rediscovered by a different priest, Eddie O’Donnell, 25 years later. Among the 42,000-odd negatives, there were more than 1,000 images of the Titanic. O’Donnell edited the images for a book, Father Browne’s Titanic Album, which has been re-released in honor of the shipwreck’s centenary.

Although the camera was his hobby rather than his calling, Browne’s photographs of the Titanic are valuable for more than their content. He is now considered a serious photographer and his work is in the collection of the Irish Picture Library.

And Victoria Bridgeman, CEO of Bridgeman Art Library, the firm that represents the images for licensing purposes, notes that the images are also valuable as embodiments of the age in which they were taken. “They have a fantastic of-the-moment archival quality to them,” she says. “It’s always so exciting when you find something that is totally of its time.”

The photographs, which were used as references during the set design process for the film Titanic, capture both the minutiae of life on an ocean liner—in an exercise room put to good use, in a child at play, in passengers moving over a gangplank—and the grand scale of the ship itself.

“There’s something particularly moving about the collection,” says Bridgeman, recalling how close the images—and their creator—came to going down with the ship, “especially from the perspective of the man who took them.”