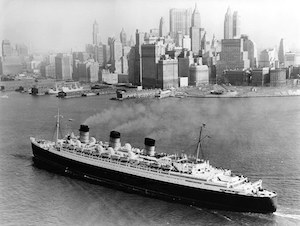 The floating palace for the rich and famous: Vintage photos reveal glamor on board the Queen Mary during her maiden voyage. Today, the historic ship is permanently moored as a tourist attraction with a museum, hotel, cafes, and restaurants. First Class passengers had a number of elegant dining options, including the veranda grill where they were entertained by a pianist

The historic Queen Mary transported Allied soldiers during World War Two and returned to passenger service until it was retired in 1967 as profits dropped and the jet age took off.

Today, the historic ship is permanently moored in Long Beach, California, where it has been preserved as a tourist attraction with a museum, hotel, restaurants and an exhibition containing some of Princess Diana’s belongings.