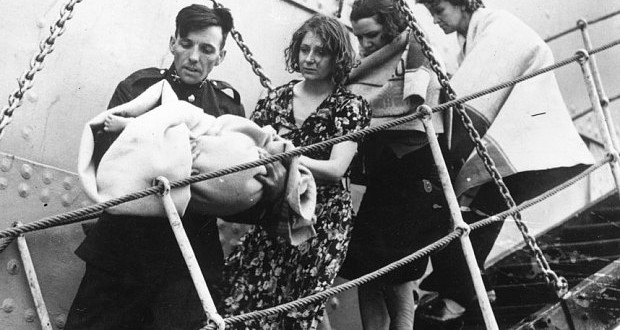 The German U Boat U-30 had been at sea for several days, under strict orders to avoid contact or discovery. On September 3rd 1939 she received notification that Germany was now at war with Great Britain.

World War II marked the end of the British Empire.  This is great newsreel footage from You Tube.

The U boat’s commander was Lieutenant Fritz-Julius Lemp. He had been in command for almost a year, therefore was not unaware of the “rules”. According to Admiral Doenitz at his trial at Nurenberg, Lemp had been under orders, when notified of the outbreak of hostilities, to keep a lookout for Armed Merchant Cruisers. Doenitz is not specific as to why this should be a priority at the outbreak of war. Germany had invaded Poland on 1st September 1939 and on 3rd September 1939, at 1115 hrs, Britain declared war on Germany.

The Anchor-Donaldson Liner RMS Athenia, on charter to Cunard, had already left Glasgow on the 1st September and was heading for Montreal with 1100 passengers, more than 300 of which were American.

Many were women and children. On the evening of September 3rd, she was sighted by the U-30 about 250 miles northwest of Inishtrahull, Northern Ireland. She was running without lights.

Before sailing all German U boats had been issued with strict orders to operate within the Prize Rules, international laws governing the conduct of war at sea. Ten hours after war had been declared between Britain and Germany this telegram – an S.O.S following a torpedo strike – reported the first attack

This was known as the Hague convention. Merchant ships were to be stopped and searched, if they were found to be carrying enemy cargo, they could be sunk. The motor yacht Southern Cross collected a number of survivors before transferring them to the freighter  City of Flint.  The Southern Cross was owned by the Swedish industrialist Axel Leonard Wenner-Gren who purchased the yacht from Howard Hughes.

This was only after the crew had been seen safely into lifeboats. U-30 had received this signal. Upon sighting the ship, Lemp decided there and then that she was an Armed Merchant Cruiser and shadowed her, watching her zig-zig pattern and course and speed. Lemp attacked the Athenia without warning. He fired two torpedoes, one of which exploded amidships, ripping open the bulkhead between the engine room and the boiler room.

As soon as he had fired the two torpedoes he dived if a torpedo should come back on him. One did misfire. As he came back up to the surface he saw the Athenia starting to list and fired a third torpedo.

Perhaps this torpedo being fired caused some of the survivors, in their panic, to imagine that they had been “fired upon”, as this was stated at the inquiry.

Lemp was by now close enough to see her silhouette. Something troubled him, as the radio operator, Hogel, later recalled that he had heard the distress call.

“I realized it could not be a troop transport but had passengers on board. I knew her name from the call sign – Athenia. Then the commander came to the radio room and asked for the Lloyds Register which listed all sea vessels and the various types. His fingers came to rest on the Athenia. He was, of course, shocked”. An apparent clear insight into what had gone through Lemps mind and his reaction.

Soon afterwards the U-30 intercepted a plain language transmission from the ship identifying itself as the Athenia.

Now that the Athenia had been transmitting, there was little need for Lemp to conceal his location, but he failed to radio back to base with his report, instead choosing to remain silent.

Lemp knew full well the enormity of his blunder and of the consequences to Germany.

The ship sank with the loss of 112 passengers and crew.

However, despite the fact that Lemp had murdered 28 US citizens, within hours Roosevelt had announced that his Government was preparing “a declaration of American neutrality”. Visit Mike Kemble’s excellent site for more information on the Athenia. Many of the images are from his account of the sinking. Kemble is an authority on maritime history during World War II. 6th September 1939: A survivor from the ‘Athenia’ talking to journalists after coming ashore at Galway, from the Norwegian tanker, ‘Knote Nelson’, which rescued the survivors. The British ship, ‘Athenia’, was torpedoed by a German submarine, the first attack of its kind.

The significance was not lost on Hitler. The first thing was to deny everything. According to Josef Goebbels, the Nazi Minister of Propaganda, it was in fact a torpedo from a British submarine that had hit the Athenia. Later he added that it was all a dirty trick by Winston Churchill to discredit Germany and to pull the United States into the war. Hitler was furious and imposed severe restrictions on all U-Boat operations. Admiral Doenitz, commander of the U-Boat arm, was to be frustrated by these restrictions for many months.

The next step which Hitler undertook was to send out an immediate order to the Kriegsmarine:

“The Fuhrer has forbidden attacks on passenger ships sailing independently or in convoy”.

The U-30, a Type VIIA U-boat seen here in this pre-war photo. When the war started, the numerals were removed from the conning tower to keep the enemy guessing. To retain their individualty, U-boat insignias were very popular.

No amount of official denials could convince the outside world that the loss of the SS Athenia was anything but a return to “German Barbarism”, as the unrestricted submarine warfare of the First World War had been termed. Such moral limitations on submarine operations were not entirely logical. For a submarine, stealth is its most effective weapon. The Hague Convention agreements requiring submarines to surface and warn surface vessels, allowing crews to launch boats before attacking, were unrealistic. The British reaction was to immediately implement the convoy system and ordered all shipping to comply.

After the Athenia affair, U-30 had been damaged as a result of a brawl with two British destroyers after the sinking of the freighter Fanad Head, Lemp limped back to Wilhelmshaven with his command, arriving there on the 27th. of September. He now took off for Berlin to report to Grossadmiral Kar Donitz and own up to his mistake. The Germans went to great lengths to cover up this event, even to falsifying Lemp’s war diary, and removing the page that reported his action against Athenia.

At the Nuremberg Trial, Donitz had to face accusations about hushing up this attack, which in fact killed 118 passengers and crew members.

This was a sorry affair in the annals of the U-Boat war, committed in the first few hours on the very first day of WW2, on the 3rd. of September 1939.