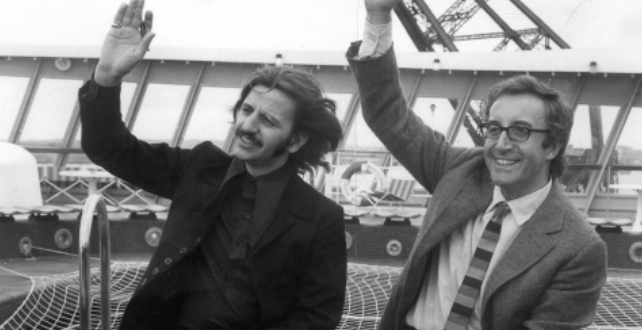 The familiar faces of Beatle Ringo Starr and actor Peter Sellers caused quite a stir at Southampton Docks almost fifty years ago, back in May 1969, when the pair were among 570 passengers boarding the second voyage of the QE2 at Southampton.

The pair were going to the United States to complete a new Commonwealth United film called “The Magic Christian,” the screen version of Terry Southern’s novel. “The Magic Christian” was described in the Echo reports of the time as a “deeply rational satire teaming with way-out ideas about modern materialistic times”.

Clutching a bag marked with the words: “Sink the Magic Christian”, an excited Ringo told the Echo that his trip to New York on the QE2 was his first sea voyage since he served in the Merchant Navy. Ringo Starr and family boarding the QE2; Ringo with his wife and friends at dinner; Background of bar; First Class lounge.

He worked in 1957 as a waiter on a pleasure steamer which ran in the summer from Liverpool to North Wales.

“I earned £3 10s a week then and usually made more in tips than in wages,” he said. “I’m going by sea this time because it’s a nice way to travel. This ship is just like a rather splendid hotel…better than you get in Scunthorpe.”

Ringo also explained that fellow Beatle John Lennon had also hoped to sail with him on the QE2, but was unable to after failing to get a visa in time. Ringo Starr entertaining crew members; Ringo and family waiting to board the QE 2.

John Lennon and his wife Yoko Ono were waiting in their white Rolls at Basingstoke for clearance from American immigration to join them on the ship.

The clearance never came although his personal assistant Anthony Fawcett said they were hoping for a change of heart and, if it came, would join the ship at Le Havre later in the day.

Washington has refused permission for the Lennons to land in the US because of their convictions for drug offenses.

Meanwhile, Peter Sellers was in a particularly playful mood upon his arrival at the docks.

But his mischievousness was evident long before he was snapped on the deck of the QE2.

Sellers was traveling up an escalator in Southampton’s Ocean Terminal he spotted a little girl descending on the opposite escalator.

As the pair passed each other a cheeky grin spread across Sellers’ face.

“Look”, he said, pointing to the entrance to the shed.

“There’s John Lennon over there. Yes, there he is, quick, get his autograph”.

The excited little girl took off at high speed, but naturally, Lennon wasn’t there as he was still at Basingstoke awaiting news from the US Immigration.

Peter Sellers, who was traveling with his four-year-old daughter Victoria and a nanny and accompanied by Amanda Quarry, step-daughter of Cunard’s deputy-chairman Lord Mancroft, echoed Ringo’s sentiments by also stating how pleasurable it was to be traveling on Cunard’s finest liner.

“It’s nice to have the time to take a little rest on board the ship,” said Peter. You get a little tired jetting it everywhere.”