LATEST
Home > ALL POSTS > Retro Thursday: Cruising to Bermuda and Nassau aboard the SS Evangeline in the 1950s… 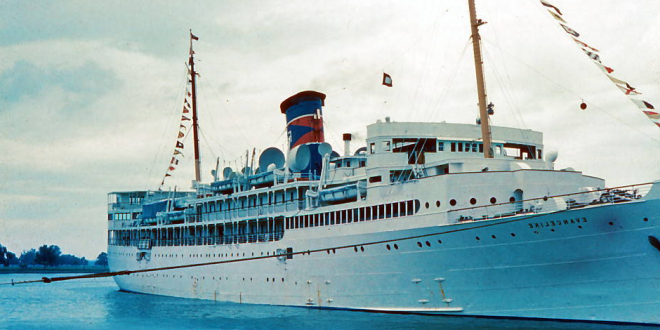 Retro Thursday: Cruising to Bermuda and Nassau aboard the SS Evangeline in the 1950s… On the promenade… at sea. At the outbreak of the Second World War; Eastern had a fleet of eight sea-going ships, together with dozens of smaller vessels on trips lasting from a few minutes to a couple of hours.

The only survivors to be returned to Eastern were Yarmouth and Evangeline, both hurricane equipped vessels.

Both were restored and placed on Eastern’s only surviving route. the Boston-Yarmouth line.

This service was maintained during the summer months, with the liners being switched to cruising out of Miami during the winter months.

The Eastern Steamship Line was practically profitless, and eager to withdraw the ships, so the Nova Scotia government stepped in and subsidized Yarmouth and Evangeline for the 1954 season until its own vessel, Bluenose, was ready.