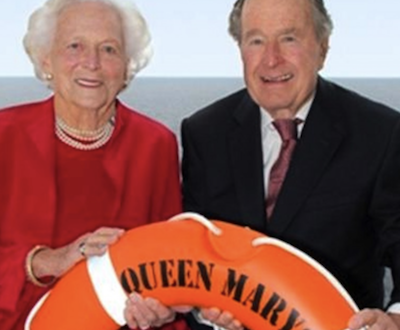 President George H. W. Bush and wife Barbara are back home in the US after fulfilling their ambition to cross the Atlantic by sea.

Bush, who also took daughter Dorothy and grand-daughter Gigi on the trip, said of the voyage when he arrived on board: “I’ve been looking forward to this for weeks,” to which his wife responded: “You’ve been talking about nothing else for months!”

After dining in the Queens Grill and Todd English restaurants, taking advantage of the Canyon Ranch spa, and taking part in an Apple iStudy session, they will have plenty more to talk about in the months to come.

President Bush conformed: “Barbara and I have always wanted to make a crossing, and it gives us great joy to be able to do so aboard Queen Mary 2 with our family and close friends. We have enjoyed the voyage from its beginning, and our experience has been made even better by the amazing crew and staff. We will always have fond memories of our Transatlantic crossing.” Queen Mary 2 arrives San Francisco for the first time in 2007.

The Bushes boarded Cunard’s Queen Mary 2 in Southampton a week ago for the seven-night crossing. Cunard was unable to confirm their presence on the ship at the time, respecting their guests’ privacy. With the ship now docked in New York, they have issued a formal statement and pictures.

Shanks said: “We are honored to have welcomed President Bush and his family as guests aboard Queen Mary 2. Over Cunard’s long history, a great many dignitaries have enjoyed the leisure and luxury of our Transatlantic Crossings, and we are delighted that the President now joins in that legacy.” Clark Gable is welcomed aboard the RMS Queen Mary. Jackie Kennedy and Robert Kennedy on the RMS Queen Mary. Judy Garland sailing from New York on the RMS Caronia.