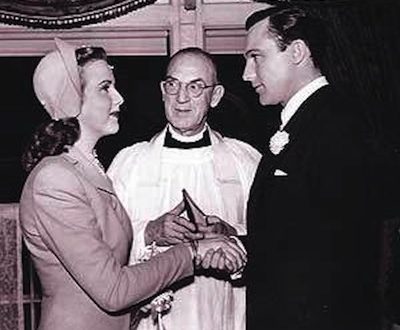 In Oscar-winning It Happened One Night, Neal Dodd is just being himself as he prepares to officiate at Claudette Colbert’s garden wedding – even though Colbert jilts her fiancée at the altar to run away with Clark Gable. 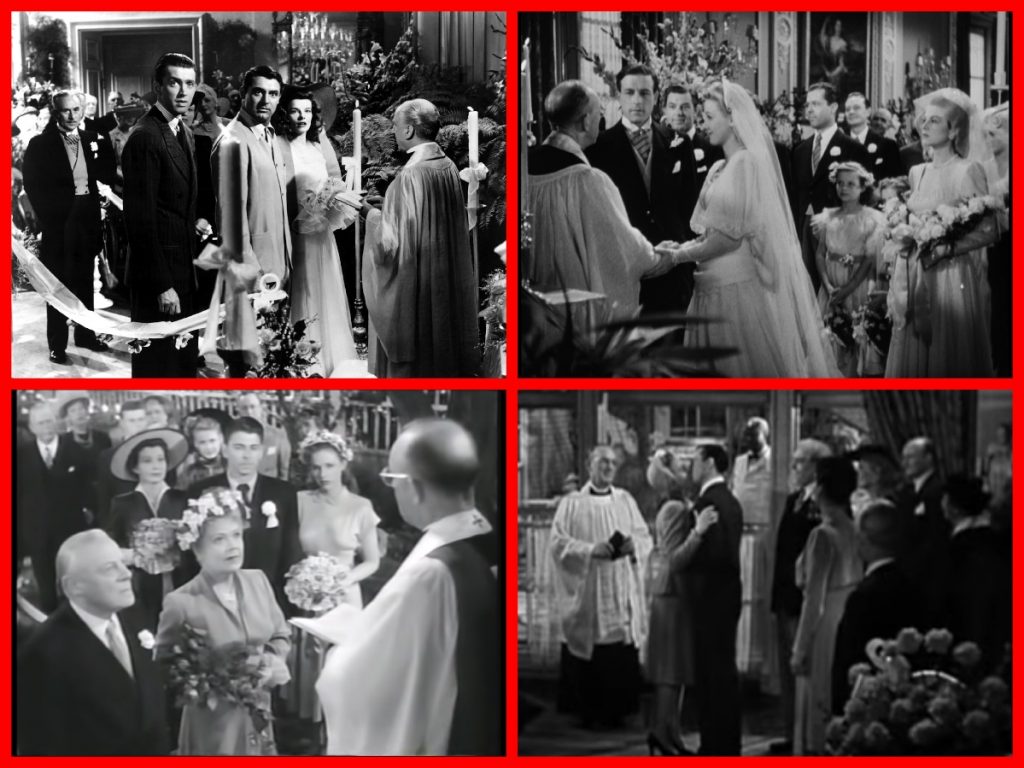 In 1920, the same year he began appearing on film, Dodd became the founding secretary of the Motion Picture Relief Fund. 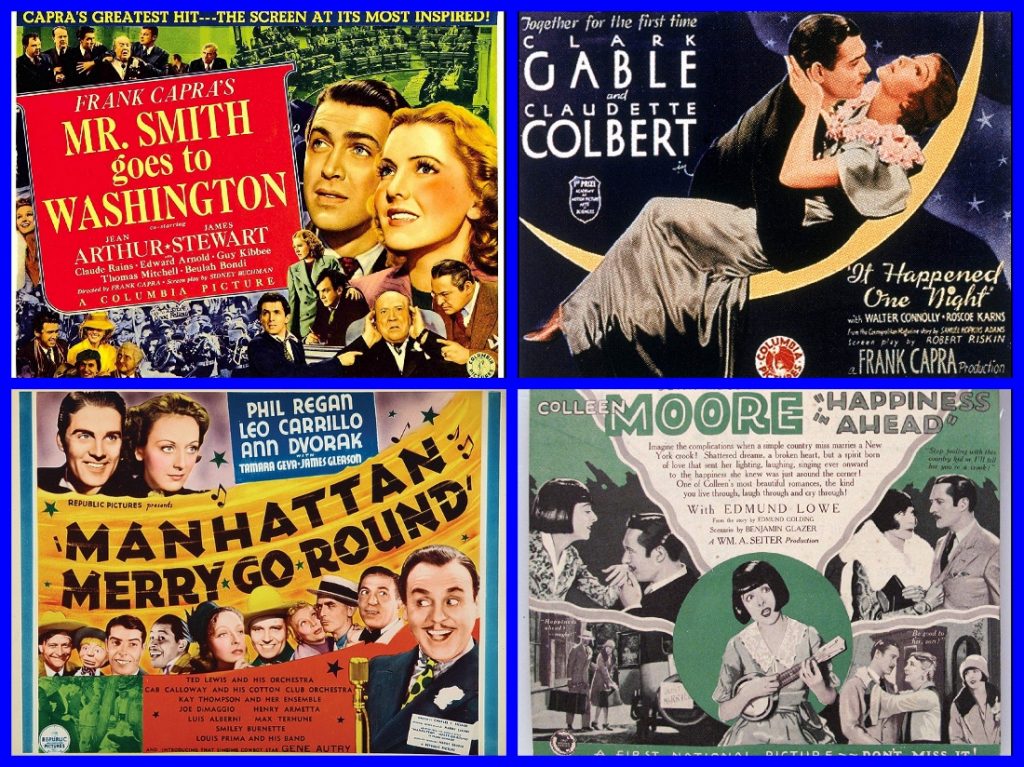 Father Dodd was featured in Frank Capra films. He starred in many silent films. 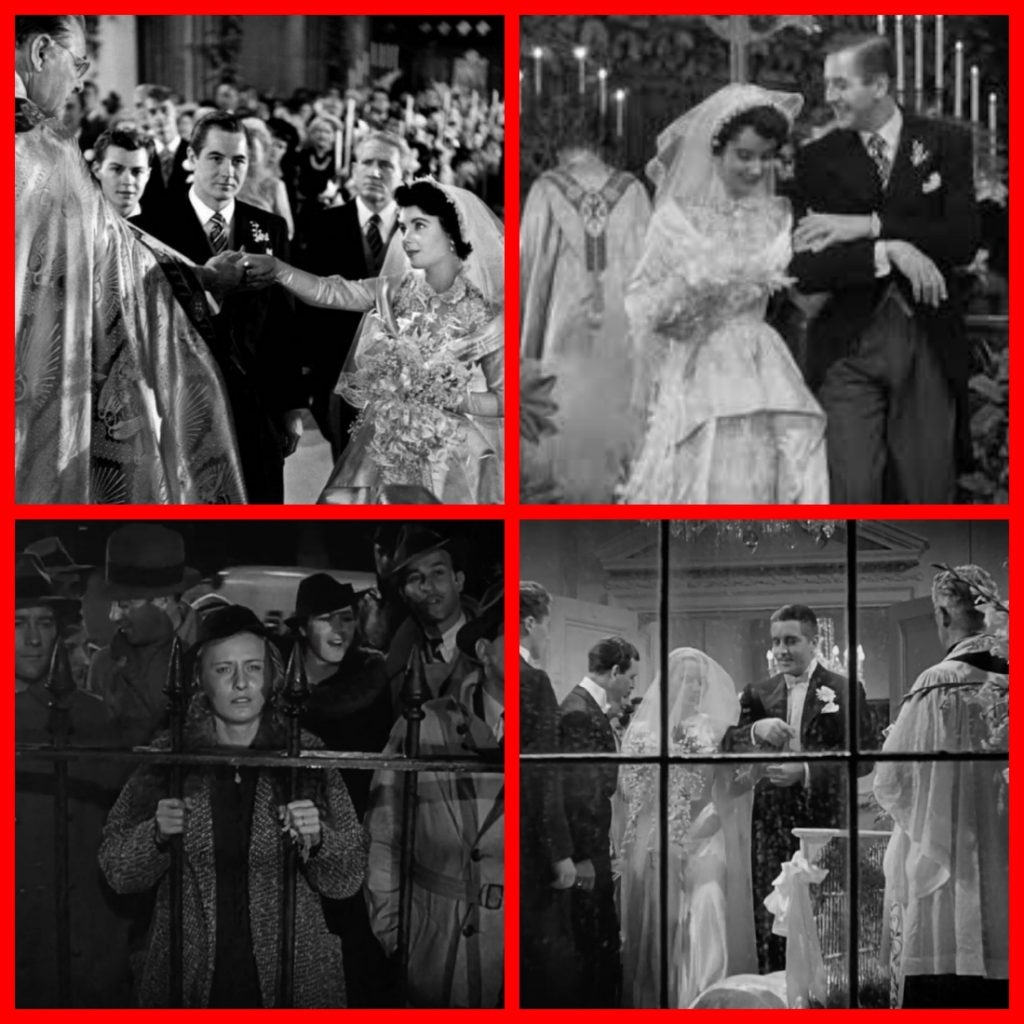 Spencer Tracy looks on as his daughter, played by Elizabeth Taylor marries Don Taylor in Father of the Bride – While Barbara Stanwick watches Anne Shirley, playing her daughter, marry Tim Holt in the tearjerker classic Stella Dallas. Father Dodd consulted on both films.

Saint Mary of the Angels… 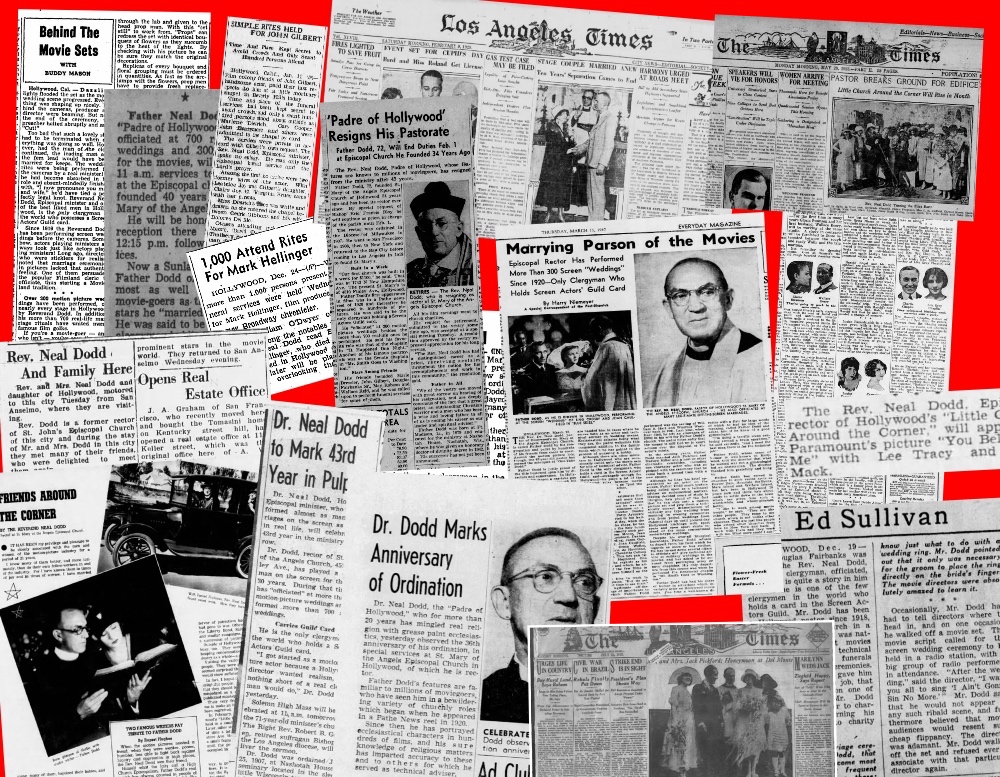 For 40 years Father Dodd was extensively covered in the news and media.

Hollywood’s Padre Has Performed More Than 300 Screen “Weddings” – He was called “One Take Dodd”!

The Rev. Dr. Neal Dodd, the pastor of Hollywood’s St. Mary of the Angels Episcopal Church, is called Father Dodd by his congregation and padre by hundreds of his friends from coast to coast.

Around the motion picture lots, though, the 7-year-old pastor has earned the sobriquet Of “One-Take Dodd.” Father Dodd is justly proud of the title bestowed upon him by directors and cameramen. In Hollywood studio jargon a one-take guy is an actor who goes through his part without blowing &amp; line or needing a second “take” of film to run through the cameras.

Actors who have worked in scenes with the Episcopal priest have frequently needed second, and third takes to get through a perfect scene but never Father Dodd. He’s just as letter-perfect on a movie set as he is on Sunday mornings when he steps before his flock with a well-prepared sermon.

For Father Dodd is Hollywood’s “marrying parson” a man whose telephone number is prominent on the files of every casting director in town because of his unusual hobby of performing marriages on the screen. When there’s a wedding with minister or priest present in the shooting script, the casting boys get hold of Father Dodd almost as soon as they’ve found the leading man and lady. If the script calls for a hitching with someone else enacting the role of the minister, Father Dodd is usually there anyway just to see that things are done in the right manner and go off smoothly.

For this extra-curricular work which Father Dodd regards exclusively as a hobby, he is paid the average wage of the bit and character players who are called in by the day. Slightly higher checks are handed him in cases where he serves both as an actor and technical adviser on wedding scenes. Ecclesiastical salaries being what they are, the padre welcomes this occasional addition to the family funds which he has gained in the process of pursuing a hobby.

Although there are other ministers and priests in Hollywood who are occasionally called onto the movie sets for bits of technical advice, Father Dodd is the only clergyman who holds a card in the Screen Actors’ Guild, and strangely enough for Hollywood he plays a lot of the ministerial roles because movie people think of him aa “just the type” to play a preacher. 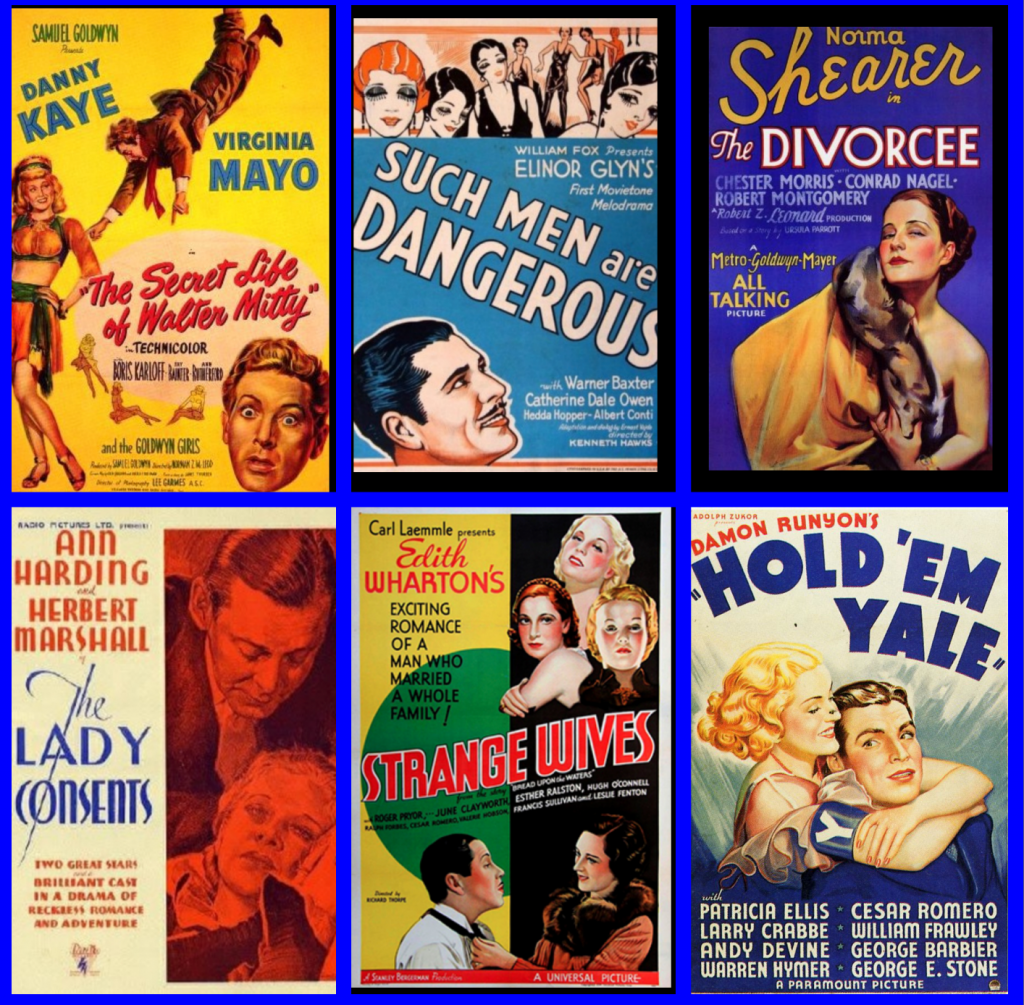 Father Dodd estimates that he has performed more than 300 screen “marriages” since the early 1920s when he was recruited from the sidelines on a movie set by Director Jimmy Cruze to see that Fatty Arbuckle was properly married to his leading lady.

This last pair were united in “It Happened One Night.” which he regards as his favorite picture and which, he admits, is one of the few films in which he has seen himself on the screen. “I take the time to work in them,” he explains. “But it seldom that I find time to see them.” 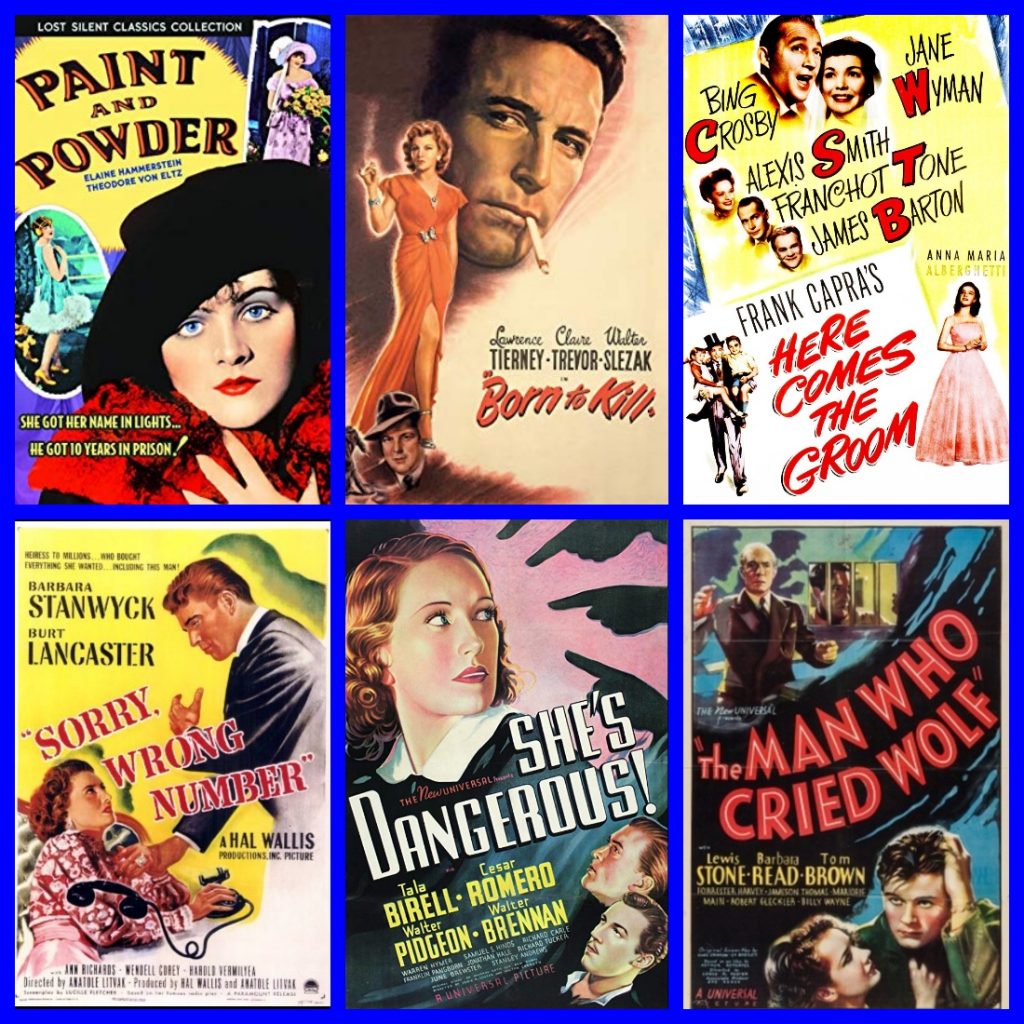 The first legitimate off-the-screen marriage of importance to Hollywood which Father Dodd performed was the sealing of William S. Hart and Winifred West-over back in 1921. Last year, when Hart died, he left an allowance of $3000 in his will for Father Dodd’s church. The padre notes sadly that the money is still tied up in court actions over the disposal of the actor’s estate. In the ensuing years.

Father Dodd married Jack Pickford and Marilyn Miller and a host of other cinematic celebrities, including one character actor who was so pleased with the ceremony that he came back a second time with a new spouse.

Although he likes his brief appearances as an actor on the screen, Father Dodd much prefers, being called upon as a technical adviser on ecclesiastical matters. Having devoted years of study to liturgies, he’s proud of the fact that he can step onto a motion picture set and give them technically correct dramatization of virtually any type wedding from morning to evening ceremonies and from period weddings from Colonial days up until present-day Hollywood hitchings with sport coats and open aport shirts instead of the more conventional eastern-type weddings. Despite his over-all liturgical knowledge.

Future President Ronald Reagan witnesses the marriage of his screen mother with Father Dodd officiating in Louisa. Doss was aboard in Lost at Sea.

Father Dodd refuses to depart from his field which he regards as more or less civilian. He has turned down several offers to officiate and give technical advice at military weddings in the movies and has asked to be excused from portraying army or navy chaplains. His only departure from this course was when he portrayed the Senatorial Chaplin in “Mr. Smith Goes to Washington.”

Father Dodd has had his share of humor in situations which invariably arise on Hollywood movie sets, one time a well-known director with a flair for large words of which he had no idea of the meaning, called Father Dodd and asked him if he knew of a good gynecologist. “I’m doing a terrific scene centering around a brain operation,” he said excitedly, “And I need the best man there is for the technical job!” Father Dodd, whose sense of humor is well known in Hollywood, told the director that what he wanted was not a gynecologist but an obstetrician. The director thanked him gratefully and hung up.

Father Dodd has served in churches in such varied spots as Beaver Dam, Honolulu, the Bronx, Mare Island, and Welfare Island, but he’s been in Hollywood 28 years now and think he’s about ready to settle down in the town which has given him such a worth-while and wholly-pleasant hobby.

“I like to work among movie people,” he says. “They are like other people. They come to my church which is not unlike other churches. They are just like people who attend other churches from here to New York and back. I work with them, and they work with me. What more could I ask?”