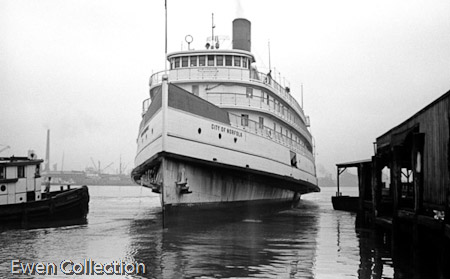 PRESIDENT WARFIELD – “Old Baltimore At Twilight” by Paul McGehee. The beautiful inner harbor of Baltimore holds memories for many people … memories of the days when you could go down to the “Long Dock” to buy watermelons brought in by the Chesapeake Bay skipjacks and bugeyes … memories of the downtown smells of roasting coffee and spices coming from McCormick’s. In 1934, the Baltimore Trust building towered over the port, witness to the daily comings and goings of the passenger steamers that would dock along Light Street, close to the end of the steamboat era. In addition to regularly calling on Baltimore and Norfolk, the Baltimore Steam Packet Company also provided freight, passenger and vehicle transport to Washington, D.C., Old Point Comfort, and Richmond, Virginia, at various times during its history.

The Old Bay Line, as it came to be known by the 1860s, was acclaimed for its genteel service and fine dining, serving Chesapeake Bay specialties. Walter Lord, famed author of A Night to Remember and whose grandfather had been the packet line’s president from 1893 to 1899, mused that its reputation for excellent service was attributable to “… some magical blending of the best in the North and the South, made possible by the Company’s unique role in ‘bridging’ the two sections … the North contributed its tradition of mechanical proficiency, making the ships so reliable; while the South contributed its gracious ease.” One of the Old Bay Line’s steamers, the former President Warfield, later became famous as the Exodus ship of book and movie fame, when Jewish refugees from war-torn Europe sailed aboard her in 1947 in an unsuccessful attempt to emigrate to Palestine. The night-boat President Warfield, built in 1928, carried people to Norfolk and back for 14 years under theflag of the Old Bay Line.

She was just one of the many steamboats that sailed the Chesapeake carrying passengers and freight, but she was later to distinguish herself in the pages of history. As one of the “Honeymoon Fleet” of steamboats that the U.S. Navy took overseas during World War II, she was used by the British in the English Channel in preparation for D-Day.

When the war ended, she was acquired by Haganah, the Jewish Underground Organization, and as the “Exodus 1947,” was used in an attempt to ferry 4,554 Jewish refugees from war-torn Europe to British-held Palestine. Even though the vessel was met by the British Navy and all of the refugees were returned to Europe, the story of the “Exodus,” and her journey, echoed around the world. She had become a symbol of the determination of a proud people in the effort to reach their “promised land”, the new state of Israel.

The former Baltimore steamer ended her days in 1952, burning at Haifa, Israel. The port of Baltimore does indeed hold many memories… and has many tales to tell. DUKE AND DUCHESS OF WINDSOR – The Duchess of Windsore was the niece of President Warfield – the onetime head of the Old Bay Line.