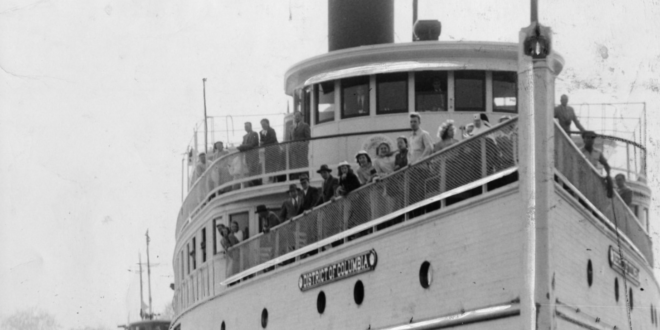 When the last night boat ended its service in April 1962, a travel editor noted that it would be especially missed by one particular group of passengers: honeymooners. Twelve hours is plenty of time to get to know someone.

These “night boats” operated throughout the United States and Canada from the late 1800s into the 1960s. They provided many overnight services. Such as from New York to Boston, Baltimore and Washington DC to Norfolk, Los Angeles to San Francisco, Vancouver to Victoria, Cleveland to Buffalo, New York to Albany, Miami to Havana etc. Eastern Steamship Lines was one of the last American flag coastal passenger services operating night boat service. Because of the financial dealings of Mr. Morse. and the competition Eastern gave the Fall River Line which was owned by the New Haven Railroad and backed by JP Morgan, a “bankers war” ensued between the two empire builders. Morse was eventually indicted in 1907 for conspiracy, and the New Haven Railroad temporarily gained a controlling interest in Eastern, increasing its strength Eastern merged in 1911 with the Metropolitan Steamship Company and the Maine Steamship Company but was forced to declare bankruptcy in 1914. Three years later it re-emerged, re- organized as Eastern Steamship Lines, with the Yarmouth Line included. In 1925, Eastern acquired the Old Dominion Line (with services from New York to Norfolk) and the New York and Richmond Steam- ship Company. Between 1925 and 1941 Eastern had services from as far south as Norfolk, Virginia, to its northernmost point, St Johns, New Brunswick, with intermediate stops en route to embark and disembark both freight and passengers. The Depression and the intense competition from the railroads and the motor car led Eastern to introduce ‘cruises’ to entice passengers to its ships. Both were restored and placed on Eastern’s only surviving route. The Boston-Yarmouth line. This service was maintained during the summer months, with the liners being switched to cruising out of Miami during the winter months.  The Eastern Steamship Line was practically profitless, and eager to withdraw the ships, so the Nova Scotia government stepped in and subsidized Yarmouth and Evangeline for the 1954 season until its own vessel, Bluenose, was ready.

Jamaican-born E Leslie Fraser purchased the name Eastern Steamship Company along with S.S Yarmouth for $500,000 in 1954. Under the Panamanian flag, with operators listed as McCormick Shipping Corporation and then Eastern Shipping Corporation, S.S. Yarmouth was renamed S.S Yarmouth Castle and immediately dispatched out of Miami on 28 June 1954 to the Caribbean. Her owners claimed that she was the ‘ex-Yarmouth fitted like a castle: On which castle they were basing S.S Yarmouth Castle’s interiors was unknown; all that could be said was that little change took place during ‘refitting’!  Fraser next acquired Evangeline in the autumn of 1954 and sent her to the shipyard for interior work. She was fitted with a small swimming pool aft, and air-conditioning was installed in all her public rooms and 50 per cent of her cabins. Limited to 350 guests, Evangeline commenced a series of ten-day cruises out of Miami on 22 December 1954. In 1957, a cruise to Port Antonio, Kingston, Ciudad Trujillo and St Thomas cost from $190 (£68). During the autumn of 1954, the government of Nassau and Eastern Shipping concluded negotiations which made S.S Yarmouth Castle Nassau’s contract ship, one of the provisions being that she be renamed Queen of Nassau. This was done, and during 1955 and 1956 the Queen sailed from Miami on Three-day and four-day cruises. (Left: Menu Cover from Eastern Steamship) When the contract expired, her name reverted to S.S. Yarmouth Castle, and she reported to the shipyard for some modernization.

A swimming pool was fitted, air-conditioning was installed in her public rooms, and she was refurbished. Two years later, the company purchased the tiny Ariadne from Hamburg-America. She was placed on luxury cruises to the Caribbean, and to enhance the ship’s appeal she was completely redecorated, refurbished and air-conditioned in 1963.

Ownership of Eastern changed hands again in 1962 when W.R Lovett of Jacksonville, Florida, purchased the company.  This accounted for the white ‘L’ on the blue diamond which appeared on the funnels during Lovett’s ownership. The SS Yarmouth operated on 10-day cruises between San Francisco and Seattle, with a stop in Victoria B.C., during the 1962 World’s Fair. She was eventually broken up and scrapped in 1979.