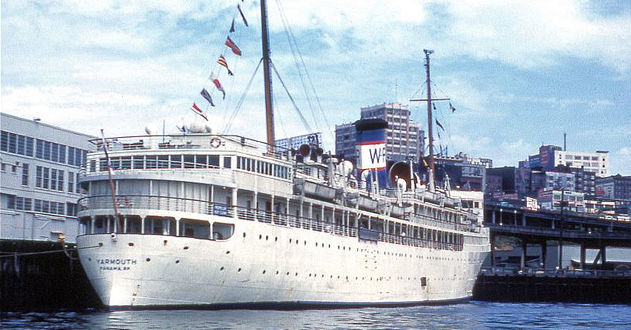 The vessel at the beginning may be the Yarmouth or the Evangeline. The harbor just after Pier 18, NYC is Yarmouth Harbor showing waterfront buildings and one of Eastern Steamships vessels. The hotel-swimming pool is the “Digby Pines” or “The Pines” located just outside of Digby, Nova Scotia. The vessel at the end of the footage is the Eastern Steamship “Acadia” which ran from Boston, sometimes from New York, to Yarmouth from 1932 to about 1940.” Because of the financial dealings of Mr Morse. and the competition Eastern gave the Fall River Line which was owned by the New Haven Railroad and backed by JP Morgan, a “bankers war” ensued between the two empire builders. Morse was eventually indicted in 1907 for conspiracy and the New Haven Railroad temporarily gained a controlling interest in Eastern, increasing its strength Eastern merged in 1911 with the Metropolitan Steamship Company and the Maine Steamship Company, but was forced to declare bankruptcy in 1914. Three years later it re-emerged, re- organized as Eastern Steamship Lines, with the Yarmouth Line included. in 1925, Eastern acquired the Old Dominion Line (with services from New York to Norfolk) and the New York and Richmond Steam- ship Company. Between 1925 and 1941 Eastern had services from as far south as Norfolk, Virginia, to its northernmost point, St Johns, New Brunswick, with intermediate stops enroute to embark and disembark both freight and passengers. The Depression, and the intense competition from the railroads and the motor car, led Eastern to introduce ‘cruises’ to entice passengers to its ships. Jamaican-born E Leslie Fraser purchased the name Eastern Steamship Company along with S.S Yarmouth for $500,000 in 1954. Under the Panamanian flag, with operators listed as McCormick Shipping Corporation and then Eastern Shipping Corporation, S.S. Yarmouth was renamed S.S Yarmouth Castle and immediately dispatched out of Miami on 28 June 1954 to the Caribbean. Her owners claimed that she was the ‘ex Yarmouth fitted like a castle: On which castle they were basing S.S Yarmouth Castle’s interiors was unknown; all that could be said was that little change took place during ‘refitting’!  Fraser next acquired Evangeline in the autumn of 1954 and sent her to the shipyard for interior work. She was fitted with a small swimming pool aft, and air-conditioning was installed in all her public rooms and in 50 per cent of her cabins. Limited to 350 guests, Evangeline commenced a series of ten-day cruises out of Miami on 22 December 1954. Two years later, the company purchased the tiny Ariadne from Hamburg-America. She was placed on luxury cruises to the Caribbean, and to enhance the ship’s appeal she was completely redecorated, refurnished and air-conditioned in 1963.

Ownership of Eastern changed hands again in 1962 when W.R Lovett of Jacksonvilie, Florida, purchased the company.  This accounted for the white ‘L’ on the blue diamond which appeared on the funnels during Lovett’s ownership.