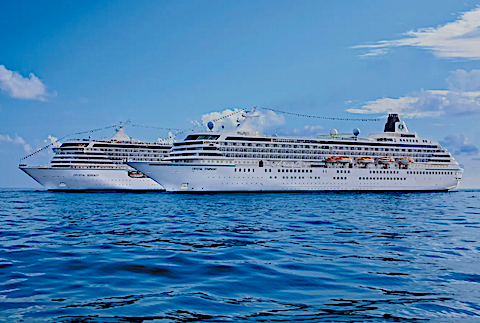 The Crystal Symphony and Crystal Serenity will come up for auction in June, according to a report from Maritime Executive.

The luxury cruise ships, part of the defunct Crystal Cruises, have been tied up in the Bahamas since the line ceased operations earlier this year with the wind-up of parent company Genting Hong Kong.

According to the report, citing information from the Supreme Court Commercial Division in the Bahamas, bids and a 10% deposit are due to the court by June 7. The winning bidder would be notified by June 14 and would have a week to complete the transaction and take possession of the ships. Inspections are ongoing now.

The future of Crystal has been uncertain since the January collapse of Genting Hong Kong. An assignee has been appointed to liquidate the company’s assets; a website was established in order for advisors, consumers and other creditors to file claims for money they believe is owed. Items on the ships, such as casino equipment and furniture, were scheduled to go to auction this month.

The report said that “several potential bidders reportedly remain interested,” but it said only one has publicly stepped forward: Manfredi Lefebvre D’Ovidio, founder of Silversea Cruises and chairman of Heritage Group. Lefebvre told Travel Weekly in March that he was “still interested” in Crystal and that any potential deal would be managed by Cristina Levis, vice chairwoman of tour operator Abercrombie & Kent. Heritage acquired a majority share in A&K in 2019.

As of last month, a crew of about 100 remained onboard the vessels, and several former crew and officers said that they remained hopeful a new buyer would be interested in resurrecting the Crystal brand, which was highly beloved by passengers and the trade.

In addition to the Serenity and Symphony, there were other ships in Crystal’s fleet, including its river ships and a new expedition vessel that was tied up in Gibraltar.

Expedition line Lindblad has taken possession of the superyacht Crystal Esprit. Lindblad will rename the ship the National Geographic Islander II and deploy it in the Galapagos.