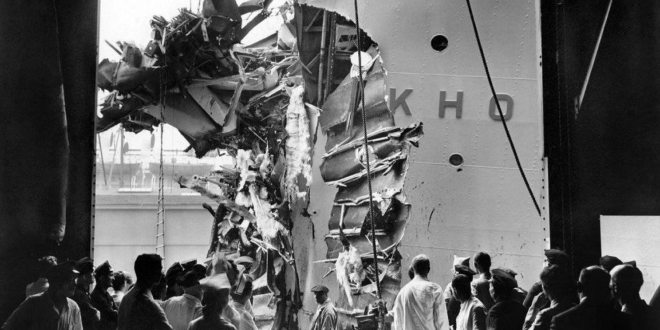 Passengers aboard the Andrea Doria. The Stockholm made an abrupt turn back to New York harbor and stumbled, with a gash in her bow and refugee passengers from the Andrea Doria aboard, to safety. Amazingly, the S.S. Stockholm was repaired and went back to her travels on the Atlantic; she is still seaworthy today and was registered in 2015 as the MV Astoria. She is the oldest-running active passenger liner in existence today. The Stockholm returning to New York after her collision with the Andrea Doria. Her bow severely damaged. Public rooms, the pool and staterooms aboard the Stockholm. Dining on the Stockholm

On the night of July 25, 1956, at 11:10 PM, in heavy fog in the North Atlantic Ocean off the coast of Nantucket, the Stockholm and the Andrea Doria of the Italian Line collided in what was to become one of the famous disasters in maritime history. Although most passengers and crew survived the collision, the larger Andrea Doria luxury liner capsized and sank the following morning. Passengers aboard the ANDREA DORA…

Owing to the collision, 50% of the Andrea Doria’s lifeboats were unusable. However, some ships responded and provided assistance, which averted a massive loss of life like that suffered by the Titanic over 40 years earlier. 
Great video on the MS Stockholm… 
On January 3, 1960, the Stockholm was sold to the East German government, who renamed the ship Völkerfreundschaft and operated her as an ocean liner until 1985. In 1985 she was transferred to a Panamanian company “Neptunas Rex Enterprises.” Her name was reduced to Volker, and by the end of the year, she was laid up in Southampton, England. She was later used as a barracks ship in Oslo for asylum seekers in Norway under the name Fridtjof Nansen.

The Stockholm was sold to Italian interests in 1989 and towed to Genoa, the Andrea Doria’s home port. When she first arrived, the press called the Stockholm the “ship of death” (La nave della morte).

She was rebuilt from the waterline up and given a modern cruise ship design. Named the Italia I, then Italia Prima, she later sailed as Valtur Prima primarily to Cuba, and was laid up there in 2001.

Acquired by Festival Cruise Line in 2002 and renamed Caribe she continued to sail to Cuba. Since 2005, the Stockholm sails as the Athena and is registered in Portugal. She is now flagged out of Cyprus operating for Classic International Cruises. On 3 December 2008 MS Athena was attacked by pirates in the Gulf of Aden.  There were reported to be 29 pirate boats surrounding the ship at one stage until a US Navy P3 Orion maritime patrol aircraft circled above which led to some of the pirates to flee.  The crew prevented the pirates from boarding by firing high-pressure water cannons at them. No one was injured, and the ship escaped without damage and continued on her voyage to Australia.

Among its oceangoing sisters, the S.S. Stockholm has always been infamous as the ill-fated vessel that struck and sank the Italian liner Andrea Doria in dense fog off Nantucket 50 years ago. The collision — on July 25, 1956 — resulted not only in 51 deaths and the daring rescue of hundreds from the swells of the Atlantic; it also assured a name for the Stockholm as “the death ship” of the high seas.


Nonetheless, on Wednesday morning, there it was: sailing through the narrows, up the Hudson and docking at a West Side pier. Yesterday it sat with anchors at Pier 90 — albeit with a new hull, new innards, and a new name.

The famed ship, rechristened Athena last year, had arrived in New York at the end of a trans-Atlantic cruise with a manifest of Britons, many of whom were aware — and apparently unfazed — by its macabre past.

“That was years ago — what’s the bother now?” asked Norman Marsh, a burly town councilor from Eastbourne, a resort town on England’s southern coast. “We were on the Van Gogh once — hit an oil tanker out of Gibraltar. Now that was something else.”

The ship’s return to New York City may have a close approximation, in human terms, to the convict sentenced to 50 years for murder who completes his sentence and revisits the scene of the crime. It was the vessel’s second journey to New York in recent years and its maiden trip to the city as Athena, sailing for the British outfit Classic International Cruises.

Steaming out of Falmouth last week, the 16,000 tonners built by Swedes in Gothenburg in 1948, lived up to its past, encountering weather that the British aboard described by turns as “frightful,” “a spot rough,” “very heavy” and “bloody terrifyingly bad.”

“Everybody was buffeted around,” said Katharyn Anderson, a homemaker from Devon traveling with her brother, Brian Thomson. “Plates were flying, cups, glasses, everything. They had to take the glass tables down and lay them on the floor.”

Ms. Anderson and other passengers said the 40-foot swells and gale force winds were in fact so strong that an unfortunate 70-year-old doctor was knocked to the floor on Tuesday night and died. His body was disembarked in Halifax, they said. Representatives from Classic International Cruises, based in Southampton, England, did not respond to phone messages seeking comment.

“You get about with all these old people, you’ll have fatalities,” Mr. Marsh observed. “It’s a law of averages, isn’t it?”

By far, the ship’s most famous fatalities were the five members of its crew who perished in the collision 50 years ago, which reads in accounts of the day like a particularly well-designed disaster movie.

Aboard the Andrea Doria: Hungarian ballet dancers rushed the promenade deck in their underthings; a Hollywood actress ran from the smoke-filled Belvedere Room to rouse her sleeping 3-year-old; a Canadian nun hurriedly donned a life-preserver, and a group of oil executives had both their cocktails and their bridge table knocked from beneath them by the force of the blow.

The Stockholm had been steaming east toward Scandinavia when its ice-breaking prow rammed the starboard side of the Andrea Doria, which had been due to arrive at Manhattan’s 44th Street Pier from Genoa. The Ile de France, sent to rescue the Andrea Doria’s 1,134 passengers, circled the capsized vessel, which sank 11 hours after its hull was torn apart.

Meanwhile, the Stockholm, with 550 passengers of its own, limped back to New York where it docked at Pier 97, only blocks from where it rested yesterday.

“It looked like someone took a bite out of the front of it,” said an old-timer, who gave his name as Paddy the Longshoreman. Paddy, who said he was there that day (as he has been nearly every day since 1953), described not only the huge chunk missing from the Stockholm’s bow, but also the faces of those at the rails of the returning Ile de France, which looked, he said, “like they were stunned, like, ‘Am I back?’ ”

It was Paddy who pointed out Athena’s riveted hull, angled prow, and small size: all signs of an older ship. Then he drifted off on a memory of just how glad he was that Ruth Roman, the actress with the 3-year-old, had survived.

The question was whether salt like him considered Athena irrevocably tainted by the past.

“It just happened,” he said with a shrug. “A lot of bad things happen on the sea.”