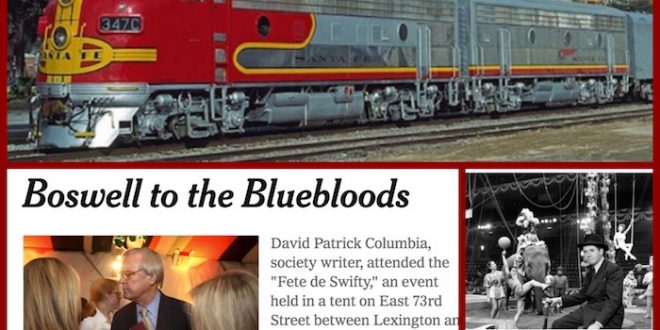 Since 2008, I’ve been writing for David Patrick Columbia’s NEW YORK SOCIAL DIARY. Besides being a chronicle of galas in New York’s gilded ballrooms, opening nights at the opera, and annual picnics on Long Island lawns, he combines society pages with personal reflection since 2001.

So it’s been a great privilege for me to contribute stories on Travel and Social History which is featured on NYSD. 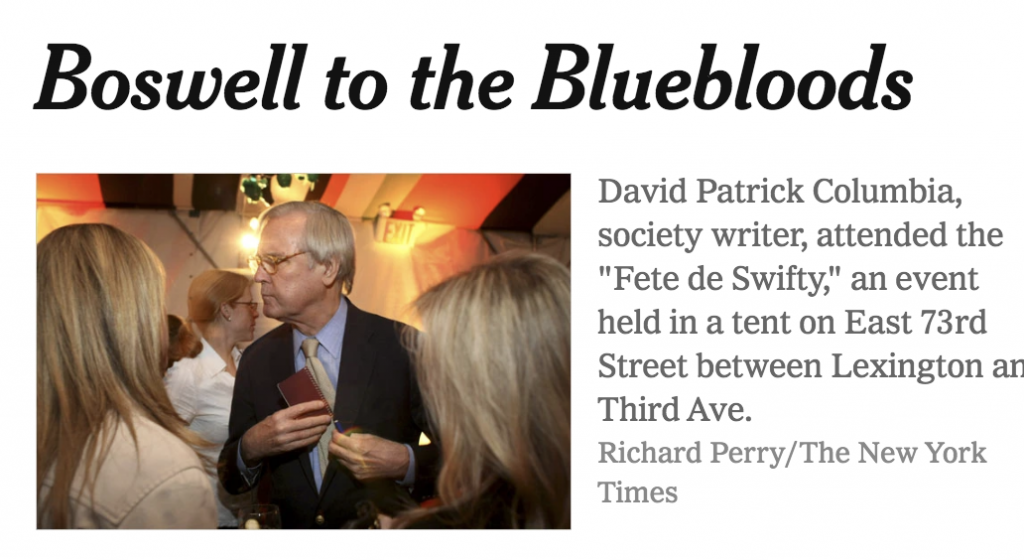 EACH morning, David Patrick Columbia looks online to check the price of gold. Then he reads the financial pages in newspapers here and abroad. He reads The Financial Times, The Guardian, and The Telegraph. He reads Page Six of The New York Post; he reads the obituaries.

For a self-made social chronicler of the city’s ruling set, its socialites, and its power brokers, all this reading serves to indicate how his work will proceed.

His signature New York Social Diary began in 1993 as a monthly society column in Quest magazine, a publication for the city’s upper crust, and in 2000 made its first appearance online as an independent project. In the diary, with the help of his business partner, Jeffrey Hirsch, Mr. Columbia combines society pages with personal reflection, resulting in an often giddy, celebratory chronicle of galas in gilded ballrooms, opening nights at the opera and annual picnics on Long Island lawns.

This first-person essay offers a remarkable portrait of what it was like to be present at the dawn of the millennium, as the stock charts peaked, trembled, and plunged, and as the drinks flowed on late into the night before the party ended.?

At 6 feet 4 inches, Mr. Columbia stands out in a crowd. Well dressed, with light hair parted at the side, and round glasses, he displays a courteous curiosity that draws secrets from socialites’ lips. He listens intensely. But when he speaks, his eyes widen, his eyebrows rise, and his long-fingered hands sketch images in the air; he conducts conversation as one might conduct an orchestra.

His Web site bristles with society news beneath a blue, white, and fuchsia header that is flanked by high-rent advertisements (Diane von Furstenberg, Bergdorf Goodman). The prose is punctuated by photographs: little groups of smiling socialites caught cocktail in hand for a frozen moment, the light of the flash touching golden brocade, a diamond earring, the chalk-white teeth of a smiling tycoon. Last month, on Mr. Columbia’s calendar: a post-symphony dinner in a tent next to the Metropolitan Opera; a gala at Cipriani for New Yorkers for Children; names like Muffie Potter Aston, Whitney Fairchild and Bronson Van Wyck, echoes of stately Old World class.

“No, I am not Gatsby,” Mr. Columbia once said of himself. “I’m Nick Carraway. I live in a little house next door.”

In recent weeks, as financial fears trump a presidential election, reporters from news organizations like Reuters and The Los Angeles Times have contacted Mr. Columbia to see what he could tell them about how the crisis has affected New York’s rich.