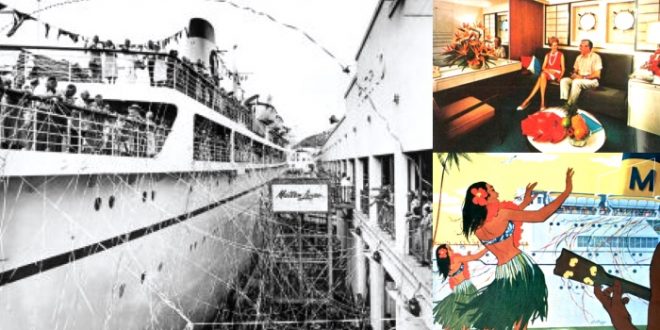 Imagine you’re planning a cruise to the South Pacific during the 1960s. Last Ocean Liners provides all the information of scheduling your trip along with the cost. A great way to cruise the past. 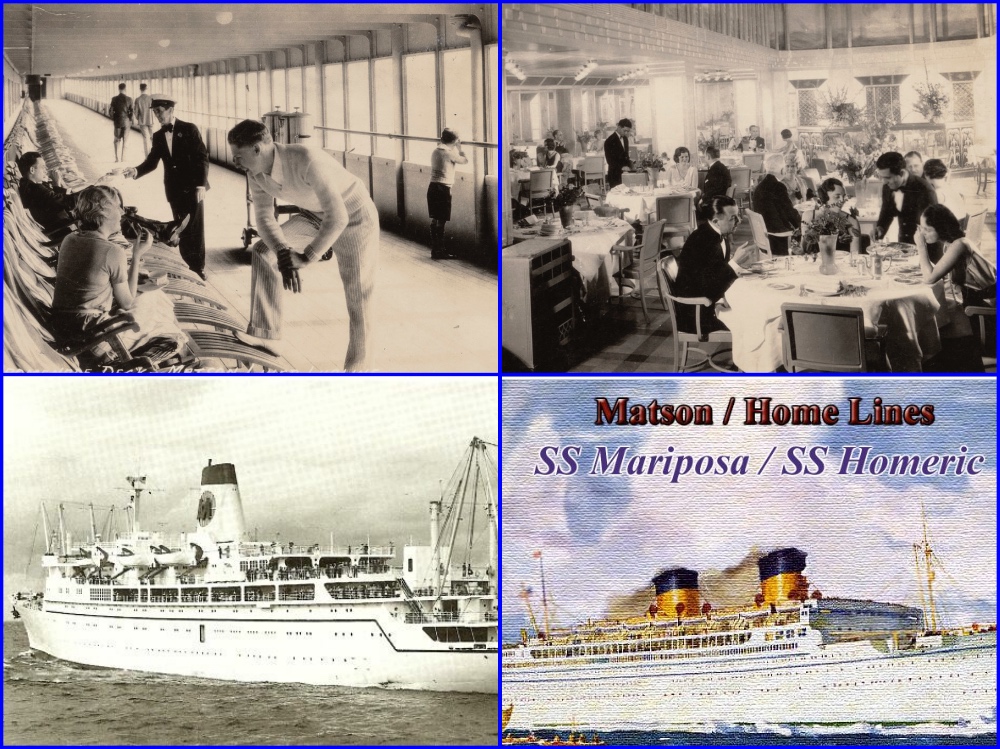 Matson Line’s Mariposa and Monterey carried only First class guests and promised regal pleasures on an exotic voyage to paradise. 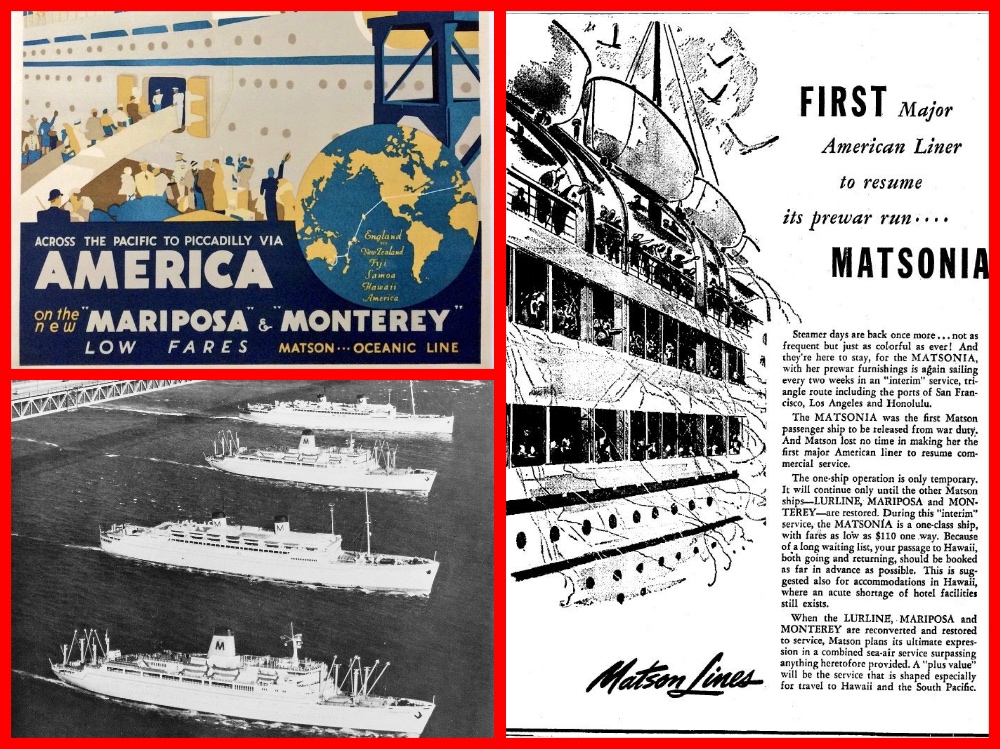 The texture of the tropics was charmingly expressed in public rooms and staterooms. The Southern Cross Lounge, Polynesian Club, Outrigger Bar and the Dining Room were all styled in the mood of Polynesia. 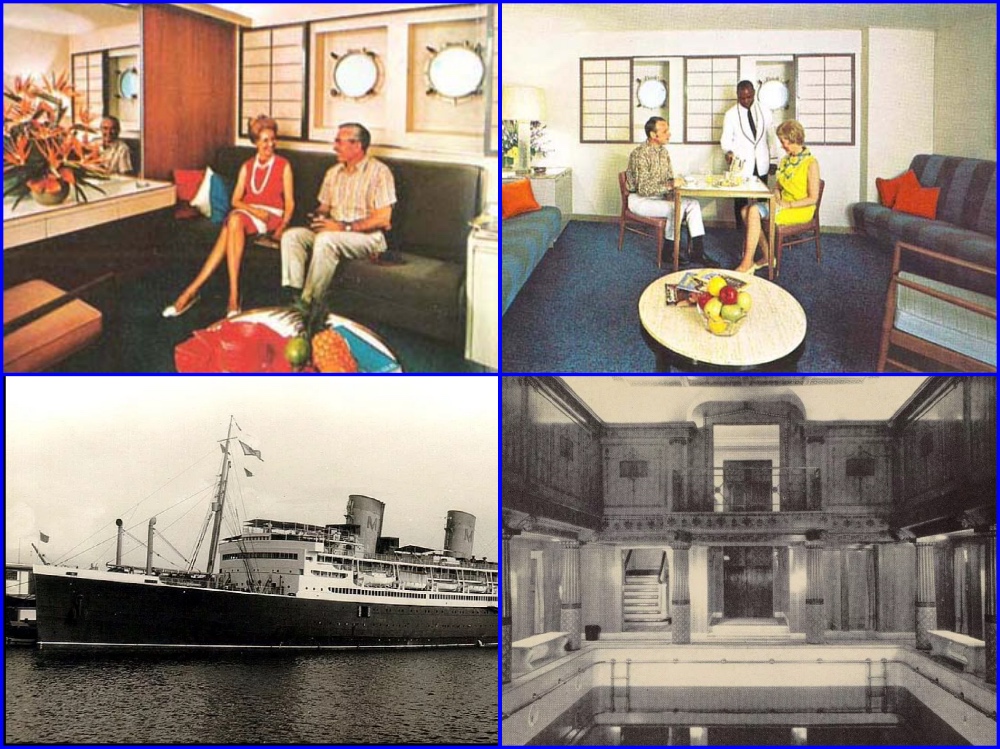 The handsome pair of ocean liners entered service in 1956 and 1957 respectively, after their conversion from Mariner class freighters. They maintained a 42-day South Pacific schedule from San Francisco to Sydney with outbound calls at Los Angeles, Tahiti, Rarotonga and Matson Lines Auckland, returning via Auckland, Suva, Pago Pago, and Honolulu. In the mid-1960s, Bora Bora was added southbound, while Noumea replaced Auckland and an off port call at Niuafo’ou was added northbound. 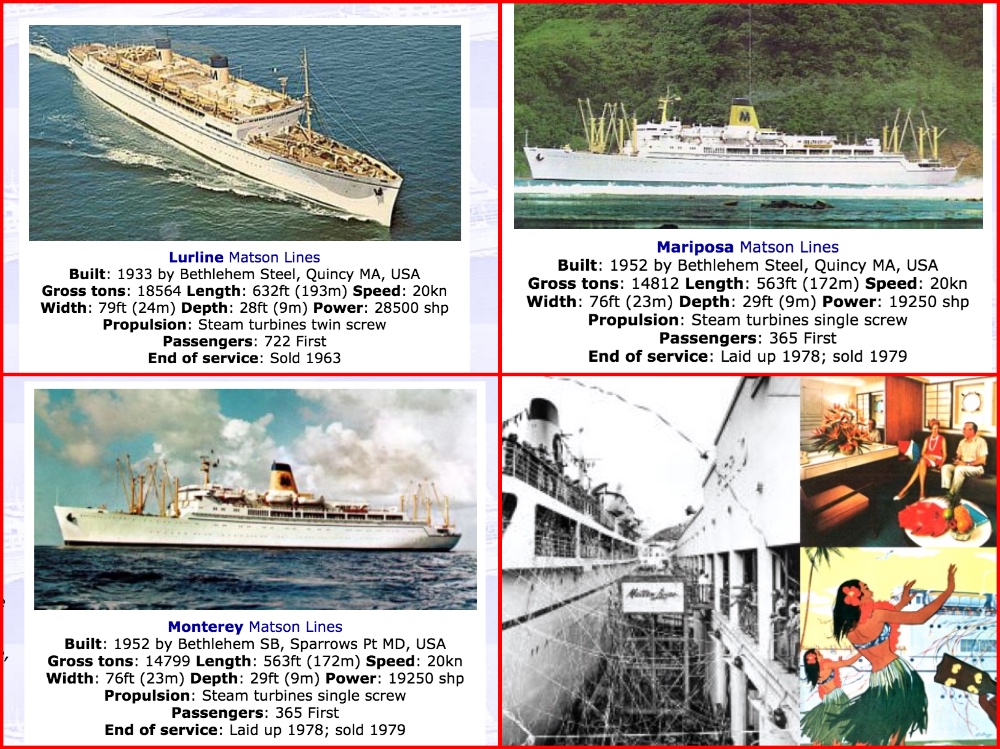 They were both sold to Pacific Far East Line in 1971 who continued the South Pacific service with minor route variations. Cruises to Hawaii and later to Alaska and further afield were added to the annual schedule in the 1970’s. 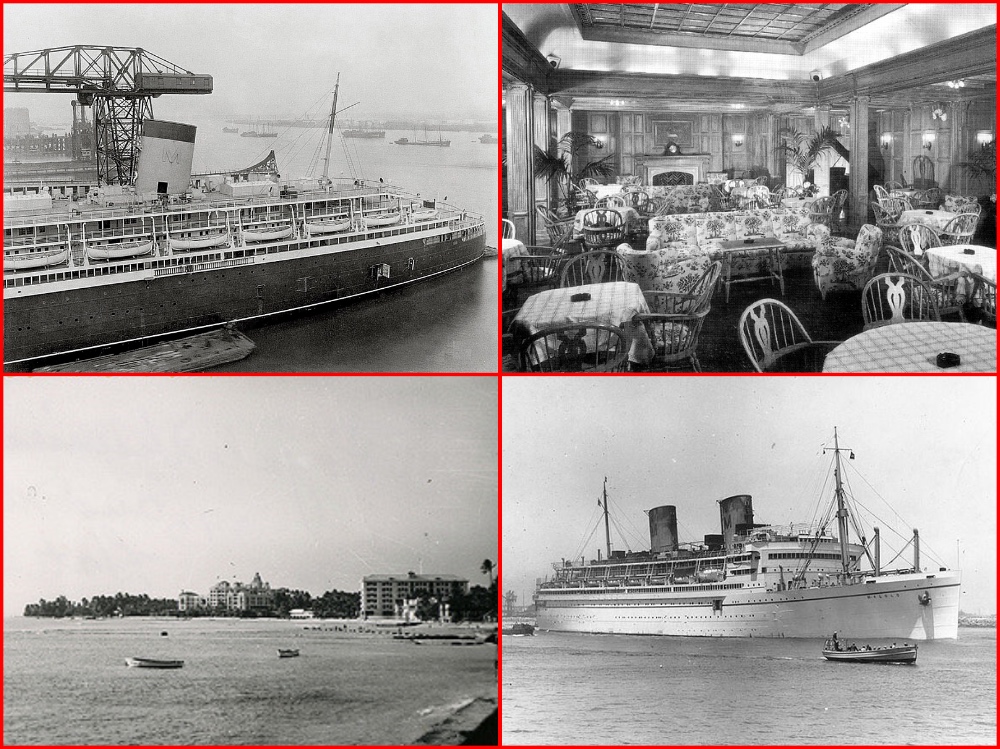 The smart Lurline was legendary on the Hawaii run, offering warm hospitality and pleasant diversions on five days express crossings from San Francisco and Los Angeles to Honolulu. 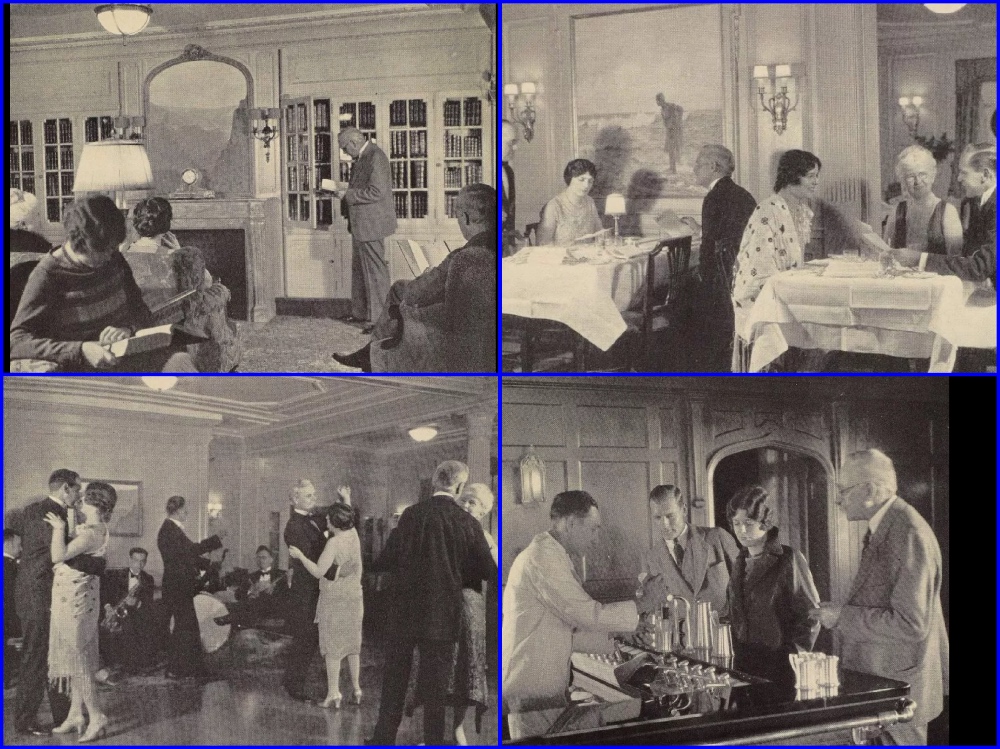 The time spent onboard was as much a part of a Hawaiian holiday as a day at Waikiki Beach. When serious engine problems developed in 1963, sister ship Matsonia replaced her and took her more famous name, remaining in service until 1970. 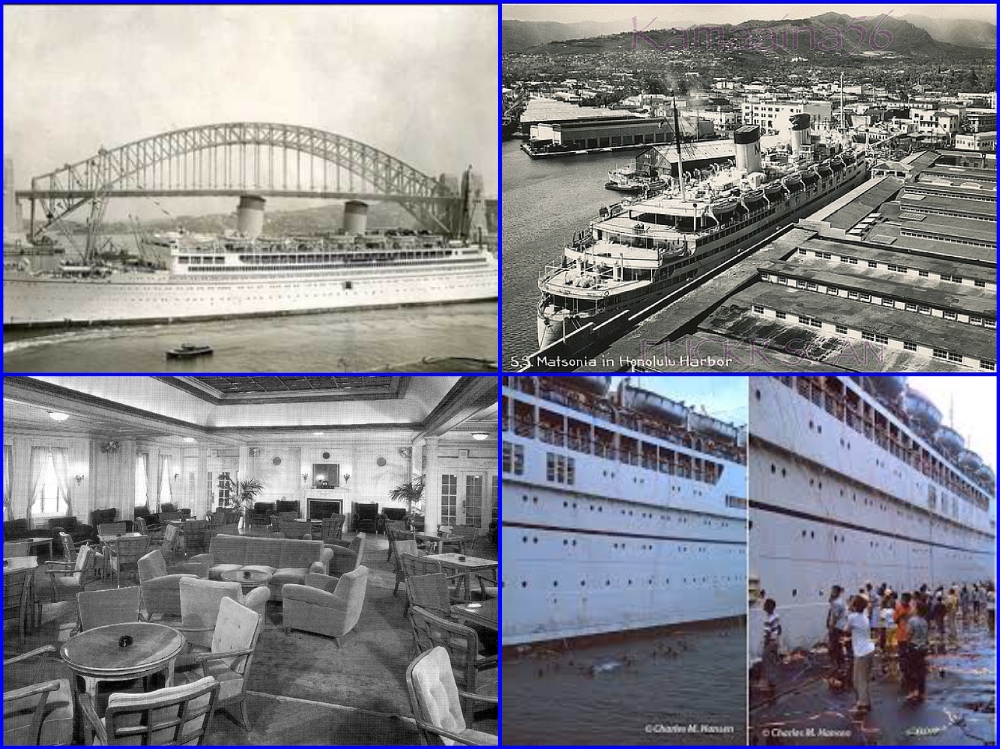 Matson Lines”When superb liners expressly conceived and designed for the cruising pleasure of their passengers ply a route of legendary beauty and romance, truly, you have the ingredients for unsurpassed travel. Sail Matson through the South Pacific … for the trip of a lifetime.” 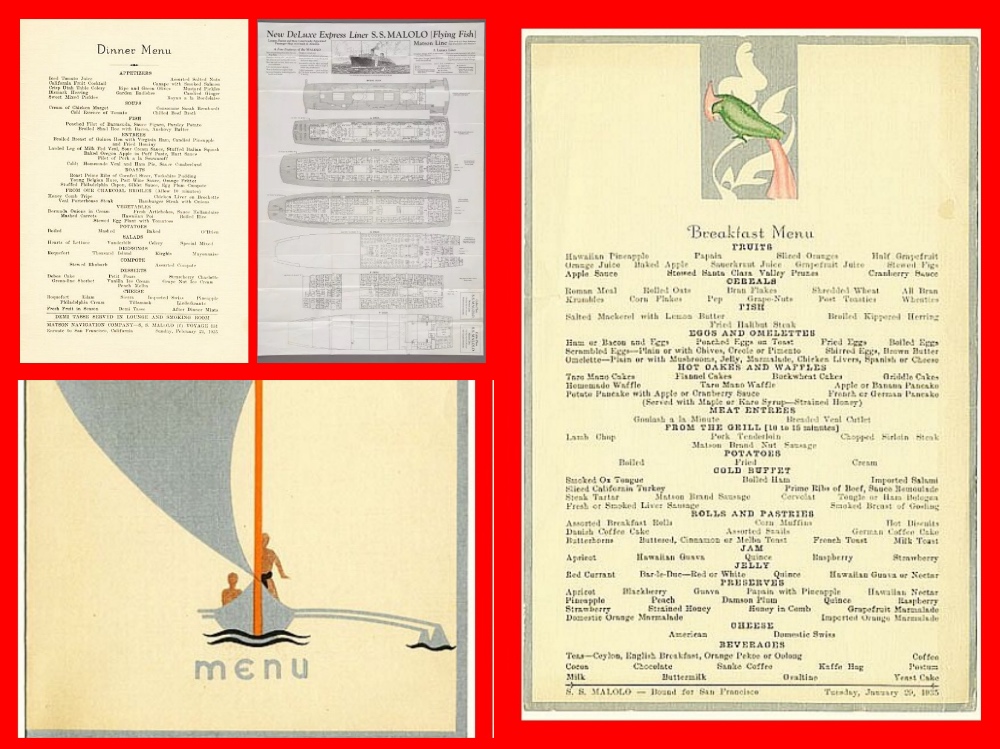 Both Lurlines were sold in turn to Chandris Lines of Greece who renamed them Ellinis and Britanis, respectively. The two ocean liners were converted to carry over 1,600 tourist class passengers each on around-the-world line voyages which they operated until 1974/75.

We’ve included photos and images of Matson Lines through the years.