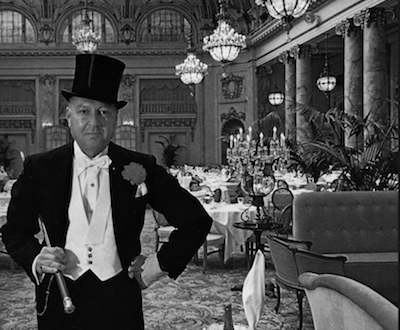 From the 1930s until his death in 1966, he was the image of a celebrity. An author, journalist, historian, raconteur, gourmet and bon vivant extraordinary – this amazing personality was one of the first gay men to have a publicly open relationship. Beebe at the typewriter with champagne for inspiration. New Yorker cartoon. 1950s

Columnist Walter Winchell called him “Luscious Lucius.” Beebe is perhaps best known for having coined the term “Cafe Society,” a group of which he was undoubtedly a member.

Zip! Toscanini leads the greatest of bands.
Zip! Jergens Lotion does the trick for his hands.
Zip! Rip Van Winkle on the screen would be smart.
Zip! Tyrone Power will be cast in the part.
I adore the great Confucius,
And the lines of luscious Lucius.

Lucius Morris Beebe (Dec. 9, 1902 – Feb. 4, 1966) was born into a wealthy Boston mercantile and banking family and, flying in the face of a hopelessly proletarian 20th Century; he lived his life in the opulence and splendor of an earlier age. Beebe standing next to the observation platform of his first private railway car, the Virginia City.

As an undergraduate at both Harvard and Yale, he was both an outstanding student and a rakehell of formidable accomplishment. It was his custom, classmates recalled, to appear for class Monday morning in full evening dress, wearing a monocle and carrying a gold-headed cane. He also had a roulette wheel and a fully equipped bar in his room. He was a good friend of fellow Yalie John Ringling North owner of the Ringling Bros. and Barnum & Bailey Circus. At the same time, he earned distinction as an undergraduate poet and won his Master’s degree with a thesis on the poetry of Edwin Arlington Robinson.

But he did not burst into full bloom as a bona fide celebrity until he joined the staff of the New York Herald-Tribune in 1929, whose staff at the time was graced with Franklin P. Adams, Henry Cabot Lodge, Alfa Johnson, Walter Lippmann, Mark Sullivan and Joseph Alsop. The “outrageous majesty of his appearance,” as Wolcott Gibbs recalled it, proved something of a disadvantage in an interview with less resplendent subjects. Once, said Gibbs, the young Beebe covered a “negligible fire in a morning coat, and a tedious dinner of the New York Landscape Gardening Society in top hat and tails.” Beebe, the journalist, was first a presence, next to the author of a column with almost staggering snobbishness and peculiar charm. His interests were people who did things, individuals with flash, not the leftover society types from the turn of the last century. He was much more attracted to an evening with Libby Holman (whom he adored) than being bored by people who just were rich with no talents or wit or personal accomplishments. Holman was accused of murdering her husband Smith Reynolds, heir to the R. J. Reynold’s Tobacco fortune, and Beebe was a major defender of Libby’s innocence and…