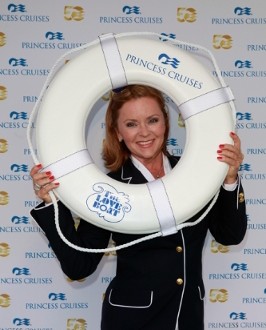 SANTA CLARITA, Calif., May 6, 2015 /PRNewswire/ — Actress Jill Whelan, known as one of the stars of The Love Boat television show, has been named “Celebrations Ambassador” for Princess Cruises, a role that has been created to help spread the message that special occasions become extraordinary when celebrated on one of the company’s cruise ships or in a spectacular destination. Whelan’s appointment is being announced to coincide with Mother’s Day and, being a mother herself, she has some insights for those celebrating their moms this coming weekend. Stars of the Love Boat filming in Hong Kong during the 1980s… – including Jill Whelan who appeared as the captain’s daughter.

In a national survey about Mother’s Day conducted for Princess Cruises by Wakefield Research, the line discovered a disappointing finding – that more than one in three Americans (34%) didn’t do anything for their mom last year on Mother’s Day, not even sent a card. This year, the survey found that 79% of Americans have procrastinated to purchase their mom a gift for Mother’s Day.

“As a mom myself I know that what many moms appreciate is a thoughtful recognition of the day. There shouldn’t be pressure to find the perfect gift; the greatest gift is to tell your mom how much you appreciate her and all she’s done for you,” said Whelan. The actress should know as she has two sons, ages 10 and 20.

She shared other survey insights including if money were not an object, the number one gift for Mother’s Daywould be a luxury cruise (35%), followed by a premium spa experience (22%) and a new wardrobe (21%). And in a nod to her work in television, the survey revealed that the TV mom most Americans would want as their mom is Carol Brady from The Brady Bunch (33%), followed by Claire Huxtable from The Cosby Show (28%) and Claire Dunphy from Modern Family (17%). Whelan is well-qualified to represent Princess Cruises’ celebrations experiences.  Not only has she been godmother to three of the company’s cruise ships – Dawn Princess, Caribbean Princess and, most recently,Regal Princess – she got married onboard Caribbean Princess and, along with the rest of the Love Boat cast, rode aboard the line’s float in the iconic Rose Parade in Pasadena, Calif. on New Year’s Day.

As Celebrations Ambassador her role will include representing Princess at various trade and consumer travel and lifestyle shows, authoring a series of celebration guides for an array of special occasions, staring in a celebrations video series, and she will occasionally cruise aboard Princess ships to surprise guests who are celebrating a special occasion. “Our survey found that over two-thirds of Americans (67%) have traveled out of town to celebrate a special occasion, and this year half of Americans (and 68% of Millennials) are likely to take a trip to celebrate a special occasion,” said Gordon Ho, the line’s senior vice president of global marketing.  “We’re committed to making our guests’ celebrations unforgettable when they cruise with us, and so bringing Jill aboard as our Celebrations Ambassador underscores our commitment to be known as the cruise line you need to sail on when you’re celebrating something special.”

Jill Whelan, who played the captain’s daughter in Love Boat, is seen with the entire crew of stars.

Ho added that the survey also revealed that when choosing a location for a special celebration, nearly half of Americans (49%) chose a beach resort as their idea getaway, followed by a cruise vacation (24%) and an exotic land tour (16%).
As part of its Celebrations program, Princess has also created a number of packages that commemorate events like birthdays, weddings, engagements, renewal of vows and honeymoons. “But our guests also mark other milestones such as retirements, graduations, reunions and others – the sky’s the limit for celebratory occasions,” Ho added.

“During my many years of cruising around the world with Princess, I’ve witnessed countless guest celebrations of all kinds, and I’ve seen first-hand the special nature of celebrating at sea. That’s why I’m so excited to be in this new role for the company,” said Whelan.