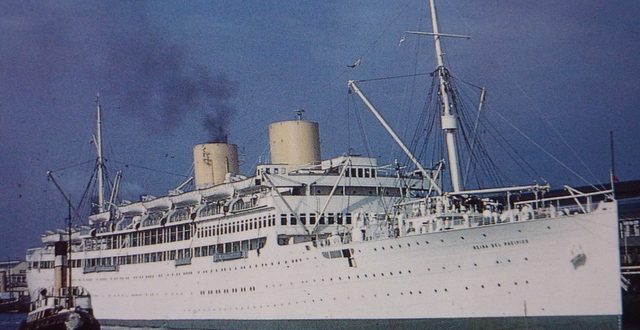 They epitomized the glamour of international travel in the days before airlines stole their trade. At one time, Liverpool’s landing stage was so busy that ships would be literally queuing in the Mersey to discharge and embark passengers. However, the period from the late 1940s saw both the golden age of Liverpool shipping as well as the decline of its passenger trade.

From the early 1960s, though, Liverpool’s passenger trade entered a decline that was unstoppable.

The Jet Age had seen the loss of much of its trade and shipping line after shipping line moved away from the port or stopped its ships sailing and sold them for scrap or service with foreign lines.

John Shephard tells the story, using the memories of those who sailed in them, of the last liners to use Liverpool.

When the journalist Godfrey Wynn went as a youngster to see relatives depart from Liverpool on one of its great ocean liners, the event made an enormous impression on him. Hollywood stars like Katharine Hepburn preferred to travel via Liverpool on the smaller, deluxe, all-first-class liners like Cunard’s Parthia and Media.

The Mersey’s role was further cemented by IK Brunel’s SS Great Britain, which made her maiden voyage from Liverpool to New York in 1845, in just two weeks.

Liverpool companies, especially White Star Line, developed the basic design, refining it from being a mere mode of travel into the floating palaces that fill everyone’s imaginations.

The Liverpool Daily Post & Echo’s Great Mersey Liners book harks back to the last decades of this golden era when the Mersey was on the crest of the waves that Britannia ruled.

With this defining role in British life lost, it is no wonder that the city still flails around to find a new and meaningful direction.

Sifting through hundreds of fabulous archive images for this book, I was instantly reminded of a time when the Mersey and its men and women were at the hub of an astonishing web of global trade routes.

These passenger ships were bound not only for Latin America, but also the Caribbean, Canada, India, the Far East, Madeira, Portugal, Spain and the US.

This was a maritime epoch when reigning monarchs were the Empresses of Britain, England, Canada, France and Scotland.

These circumstances led to Liverpool’s population gaining a worldliness, a classic seaport’s outward-looking character that made all of its inhabitants appear more savvy than other, less blessed, landlocked cities.

It also had a hugely positive effect across Merseyside with so many companies and services related to the liner trade from laundry services to the Adelphi Hotel servicing the exacting demands of first class passengers in transit.

Although the 1970s is regarded as the strike-torn decade, way back in 1960 terrible strikes at Cammell Laird disrupted the building of the prestigious RMS Windsor Castle, and crew disputes paralysed passenger services.

However, the circle turns and Liverpool now has a magnificent new cruise liner landing stage, situated where Princes Landing Stage floated until 1974, so the future looks rosier than ever.

Most of all, we should thank the marvellous efforts of the Liverpool Post & Echo’s terrific photographers, including Walter McEvoy, Stephen Shakeshaft and Neville Willasey, without whom this volume would not be possible.

Thanks to Peter Elson at the Liverpool Daily Post…