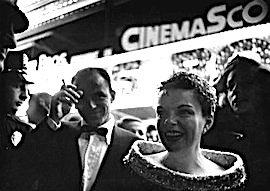 Dozens of the stars attending the opening predicted an Oscar sweep for Judy Garland, James Mason, Jack Carson, and A Star is Born.