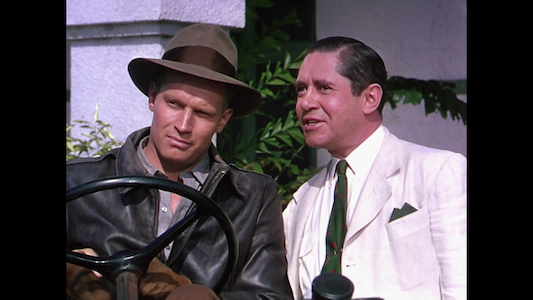 Ringling Bros. Circus heir, John Ringling North was the man who brought “The Greatest Show on Earth” into the 20th Century and was responsible for its survival into the 21st Century! The main entrance to Ringling Bros. big top in the 1950s. With over 1200 employees, in 1951 the touring circus used three special trains, gave over 400 performances in 122 cities including 33 days in New York City at Madison Square Gardens.

John Ringling North was a combination of Circus King, showmanship, brassy flamboyance, huckster salesman and perennial Playboy, and was a good enough show to compete with the acts and spectacles he produced under the Big Top for the Ringling Bros. Barnum & Bailey combined shows. John and his brother Henry North pose with one of their star attractions in front of the Big Top during the late 1930s after John had taken over the circus.

Against all the odds, he brought the family circus into the 20th century, running it for thirty years, until 1967 when he sold it after conquering litigious relatives and the challenge of TV. New owners Kenneth Feld (right) with his father Irvin, who bought the circus from North, under the big top in 1978.

Flash forward, it’s fifty years later, and Sunday, May 21, 2017, Kenneth Feld, the current owner of the Ringling Bros. show who has carried on the John Ringling North tradition of unequaled showmanship, will reluctantly be closing “The Greatest Show on Earth.” He blames the closure on diminishing ticket sales after the retirement of the famed elephants last year following a bruising 14-year legal battle with Peta, the controversial animal rights activists group. Hundreds of performers and circus workers will be out of a job, with the 146-year-old iconic institution to be just a memory. Marilyn Monroe is riding a pink elephant at a benefit performance of the 1955 benefit at Madison Square Garden for the Ringling Bros. Barnum & Bailey opening night.

The final performance of the circus won’t be staged at famed Madison Square Garden where it played for many seasons, and North held court with New York celebrities and socialites, or under the Big Top as seen in Cecil B. DeMille’s Oscar-winning film. The sold-out performance will take place at Nassau Veterans Memorial Coliseum Long Island, with ticket scalpers selling front row seats for up to $3000 each. Newspaper headlines announce the end of the circus touring under the giant canvas tents. No more would little boys be able to sneak under the Big Top.

All of this is sadly reminiscent of John Ringling North’s heartbreaking decision to strike the Big Top at 11:15 P.M., July 16, 1956, for the last time. Thus, ending decades of bringing touring the tent show circus, with a traveling zoo and over 1500 employees to 100s of cities across America, from Paducah to Kalamazoo. The circus was started by the original seven Ringling brothers on a shoestring as a wagon show dubbed Carnival of Fun, which opened in Baraboo, Wis., on May 19, 1884. Barabook where The Greatest Show On Earth was born.

Operated by five of the Ringlings, it caught on and prospered, absorbing lesser rivals along the way. By 1918, the Ringlings were ready to buy the name and enterprise left behind by the legendary P. T. Barnum. The company was well on its way toward becoming the three-ring extravaganza that called itself ”The Greatest Show on Earth.” The big top finale during a performance in the 1930s when North was working for his uncle before taking over the circus.

Starting in the 1930’s, North saw the glittering family business through some good times and others made rocky by labor disputes with the Teamsters, management problems, family disagreements and years of financial losses. Mrs. Ringling at the height of the great depression attempts to persuade roustabouts and laborers to take a wage cut in order that the family wouldn’t have to close the show.

In fact, it was nagging deficits that caused him to give up on the traditional big top: the circus had simply grown too big for it. In July 1956, the tents were pulled up for the last time in Pittsburgh, and North, chairman, president and impresario of the company, said at a news conference, ”The tented circus as it now exists is, in my opinion, a thing of the past.” The decision spelled the end of the kind of circus America had grown up with. Folding the Big Top meant that thousands of young fans would no longer see elephants getting off the train since the Ringling Bros. would only be touring big cities and indoor arenas.

Many scorned North for folding up the Big Top but if he hadn’t made this move most likely The Greatest Show On Earth would have closed much earlier than lasting into the 21st Century. Children gather around a circus sideshow attraction The Bride of Frankenstein.

Henry recounted in his memoir Circus King – John Ringling North: “The circus can be generous… especially to children. Sometimes I think my brother John, my sister Salome, and I had the most wonderful childhood ever. Imagine growing up adored and spoiled by six uncles who owned not one but a flock of circuses, including the two outstanding ones of history: Ringling Brothers and Barnum & Bailey’s “The Greatest Show on Earth.” The Ringling Brothers were the elite in Baraboo, Al Ringling’s home.

On the one hand, it was a small-town life with John’s musical talent making him a great addition to the choir of the Episcopal Church. Music was North’s second love. He is seen here entertaining friends at the Ringling Hotel in Sarasota.

Singing was the beginning of developing his avocation as a musician and composer of popular songs used for the Ringling Bros. circus productions and Cecil B. DeMille’s Oscar-winning film “The Greatest Show On Earth.” He even formed his own dance band and performed regularly at the family hotel in Sarasota. The children had their own mini circus.

On the other hand, the North children enjoyed the privileges of being part of the Ringling family business. Each summer they spent a couple of weeks traveling in private Pullman cars with the gigantic touring circus, having access to every part of the circus, from the Big Top to the Side Show and fabulous midway or enjoying vacations at their uncle’s large mansions on Lake Michigan. The North family children lived and breathed circus, something every child would dream of having. They didn’t have to run away with the circus because it was in their own backyard. Ringling children enjoying a ride on one of their favorite pet elephants.

The children’s pets weren’t a cat or dog but elephants, horses, giraffes, zebras, and camels. Clowns entertained the kids, and they played with circus performers children. John spent time with the fifty-piece band and learned everything possible about the frenzied circus music. Circus showgirls in the 1920s.

After finishing prep school, John studied first at the University of Wisconsin but transferred to Yale for two years, leaving to work in New York finance and real estate development. John Nicholas Ringling at the White House. He is the most well-known of the seven Ringling brothers, five of whom merged the Barnum & Bailey Circus with their own Ringling Bros World’s Greatest Shows to create a virtual monopoly of traveling circuses and helped shape the circus into what it is today. In addition to owning and managing many of the largest circuses in the United States, he was also a rancher, a real estate developer, and art collector. A national figure and a multi-millionaire.

North then joined the family business, to assist John Nicholas Ringling, his uncle, in all affairs involving the circus, real estate, and other business interests. John Ringling was the last of the founding brothers and treated his nephew as his son. After his uncle’s death in December 1936, North became president and director of Ringling Brothers and Barnum & Bailey Combined Shows Inc.