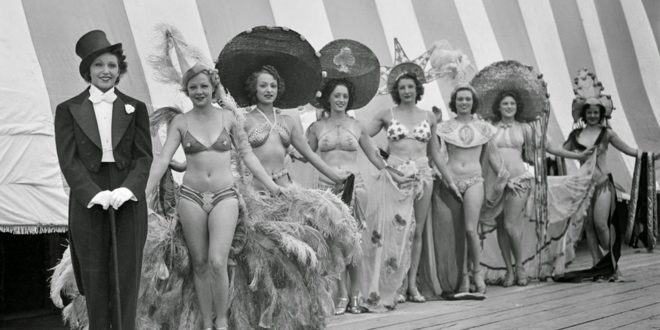 North, an accomplished horseman, is seen at the circus winter quarters in Sarasota, Florida.

If John Ringling North had not come on the scene to run the family business in 1937, Ringling Bros. Barnum & Bailey might not have ever made it into the 21st Century to have its last performance tonight on Long Island. The spectacular aerial ballet and parade for the show in the 1950s. North brought excitement, spectacle, and glamor to big cities and small-town America. Showgirls under the Big-Top in the 1950s.

He seemed the only one to have the business and showman sense to run the show amongst the younger family members except for his brother Henry, who became the circus’s vice president. Another Yalie, his brother was as mild and self-effacing as John was as aggressive. North was no longer a mid-west small time boy but a sophisticated, bon vivant when he took over the debt-spangled show. The finale at the Garden, costumes by Miles White, directed and choreographed by Richard Barstow in the early 1950s.

John and his brother were harshly criticized for modernizing the circus, with hard-shells and nostalgics saying they had ruined it. The generations raised on the tinsel glitter of the old-fashioned circus were gone, people were looking into the future and a “new deal.” A blind little girl sits on the elephant as children gather around in Chicago where the circus was touring in 1912.

Audiences were more sophisticated. Automobiles and movies, to which color and sound had just been added, had done that.

North had toured with the circus during the summer months when he was a child and teenager. He knew the circus, the family business, from the ground up and even worked as a candy butcher. Trapeze artists were a big attraction for Ringling Bros., and name acts were a big draw. North toured Europe to get the best acts. North with super circus star “Bring ’em Back Alive” Frank Buck. He was an American hunter, animal collector, and author, as well as a film actor, director, and producer. Charles Le Maire, who had mounted The Ziegfeld Follies and George White’s Scandals designed their first show. He billed in the program as “the noted master of color tone and exquisite fabrics.” John Ringling North created the aerial ballet with 55 talented women. They all performed throughout the show as dancers and riding the 55 elephants.

North introduced the aerial ballet, a production number with sixty beautifully costumed girls performing acrobatics high above the arena on the webs. The Greatest Show on Earth was annual event anticipated in every town and major city across America. Gargantua, the most terrifying creature in the world. John and Henry found the major circus star for years in the backyard shed of a quiet lady in Brooklyn.

John signed the best traditional circus stars, such as “Bring ’em Back Alive” Frank Buck, the Wallenda family of high-wire performers and such attractions as Gargantua the Great, the “vehemently vicious” 550-lb., Gorilla that drew more than 40 million circus goers. Heading to New York, he searched for top talent to create the reimagined circus. Commissioning work from the likes of Stravinsky and Balanchine, then hiring Norman Bel Geddes and John Murray Anderson, the reigning stage-design talents of their time, adding ballet and Ziegfeld-style extravaganzas. Circus parade during the 1950s with America meets Christmas extravaganza.

Aerialist showgirls, dozens of them, were added to produce spectacles rivaling any stage production ever produced. Animal acts were a major attraction. The circus was a traveling zoo were over 1000 animals could be viewed by the patrons in the big top or the menagerie. The circus was still the circus, and the sideshow was a major a big attraction.

John Ringling North was the Circus King – He was a glittering anachronism whose social and professional activities evaded the traditions of such rococo sports as “Diamond Jim” Brady, “Bet a Million Gates” and his own prodigious uncle, John Ringling North.